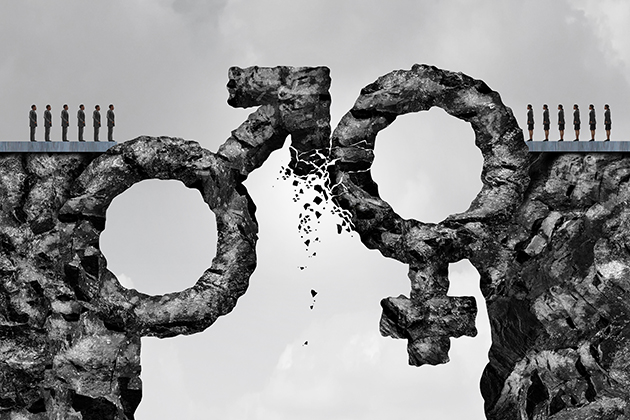 I've worked in the diversity and inclusion field for more than 25 years, yet I'm still astonished by the number of accusations and incidents that are now being reported on a near-daily basis.

No industry seems to be immune, and some abusers target men as well as women. Responsible organizations are seeking solutions, but they're not sure what to do besides scheduling the old standby — sexual harassment training.

According to a recent article in The Washington Post, even the EEOC has found little evidence that sexual harassment training is the best prevention.

I've taught sexual harassment training in the past. I am absolutely certain that this would not have been a deterrent in the most serious cases, nor would it have created an environment in which victims of harassment and sexual misconduct would feel comfortable coming forward.

And despite evidence to the contrary, there are still too many CEOs, business owners and managers who think a one-hour sexual harassment training in person or online is the answer to all "gender ills." It's actually laughable to even claim it will make a major difference.

Perhaps they think it couldn't happen in their organization, or if they haven't heard any complaints there's no urgency. Managers have told me they don't want to take the time or spend the money for anything beyond what is mandatory.

What can we do?

One of our clients was concerned to hear that three of their best female employees were planning on leaving. When we interviewed the women, we were told that they were tired of all the sexual comments, being left out of informal decision-making meetings and being asked to take on responsibilities that perpetuated stereotypes.

The three of them were leaving to start their own company. When asked for feedback of what could have been done differently, they said, "They could have provided opportunities for discussion of issues, supported us as women and listened to us. We tried to engage but kept on being told that we were whining, when all we wanted was an equal opportunity to show what we could do for the company."

So what can you do to prevent the inequities happening every day? How can you help individuals feel less isolated if they are targeted or excluded based on gender?

Perhaps it's time to take a new approach, to go beyond the "usual" sexual harassment training and find a solution that engages people across any gender in meaningful conversation to find sustainable solutions together.

Several years ago, I was conducting diversity training for a police department that had begun to hire women. A male police lieutenant asked if I could facilitate a discussion between the men and the few new female recruits

"We just went through anti-sexual harassment training," he said. "It was a disaster. We all felt like we were in a classroom detention accused of harassment and forced to listen to a lecture. We want to make this a comfortable place for women, but most of us have never worked with women in this capacity. I want to make sure that we are not inadvertently making someone uncomfortable. We don't want to be on the defensive or end up resenting the new female recruits."

We facilitated a dialogue between the men and the women that resulted in feelings of mutual respect and an understanding of how to best work together.

Here are some additional or alternative solutions to prevent harassment, and create an environment of equity across gender.

Institute a process for gender dialogue

While most people will tell you they are against harassment, they may not be aware that someone is being harassed or deliberately made to feel uncomfortable. They often don't know what to do when they see it, so they do nothing.

One of my earliest jobs was as a server in a restaurant. One night the manager followed me downstairs and tried to assault me. I was able to get away. Another employee later told me he had seen what was happening but didn't know what to do, so he did nothing.

Teaching people how to intervene and not be a silent bystander is one of the most effective ways of stopping harassment and empowering people to take action. Employees must learn language and ways to educate others who may be unaware of how their behaviors and comments impact others.

Every inappropriate comment or behavior does not warrant firing, shunning or shaming. We need to educate where we can, allow people to change and apologize. We can then enlist and hold those people responsible to educating others.

Meaningful dialogue across gender can build a sense of community, eliminate feelings of isolation and empower people to speak out when they are harassed or see others harassed. One of the main reasons people give for not speaking out or reporting harassment and inappropriate behavior is because they don't want to be singled out. They feel isolated and alone and don't think they will be supported.

I was asked to work with an organization where a manager physically attacked a young woman in his office. He had been harassing her for weeks. Other employees witnessed it but said nothing.

The woman was a recent immigrant and afraid to speak up for fear of losing her job. The other employees said they didn't know this woman so they didn't think they should get involved. It wasn't until he attacked her that someone intervened.

When people don't know each other or the victim is from a different culture, it's easier to be a silent bystander.

In order for anyone to do their best work, they have to feel physically and emotionally safe from any kind of harassment. They have to know that their contributions will be recognized and rewarded, and that they have support of other people in their organization should there be any issues.

A male-dominated sales company wanted to expand their market, which was increasingly female. It took losing several female clients before they thought to ask the women in the organization for help, which led to everyone participating in a facilitated dialogue session to talk about gender.

It was clear that most of the men had no idea how the women were feeling, how some of their behavior impacted the way they worked together and how some of the humor they thought was so funny was offensive.

Several of the women said they were not surprised that the sales team had lost those accounts. They had even predicted it would happen but were so tired of not being heard they stopped trying.

However, at the end of that first dialogue process, they began to work together to address problems and solutions related to gender inclusion, inequity and inappropriate comments and behavior.

Going beyond sexual harassment or anti-bias training to open, honest and meaningful dialogue across gender can not only change behavior but can also create a new sense of community where gender is not a basis for power, entitlement or discrimination. Only together can we eliminate harassment, sexual misconduct and inappropriate behavior, and only together can we ensure that gender differences are leveraged to drive innovation, creativity and new ways to collaborate.