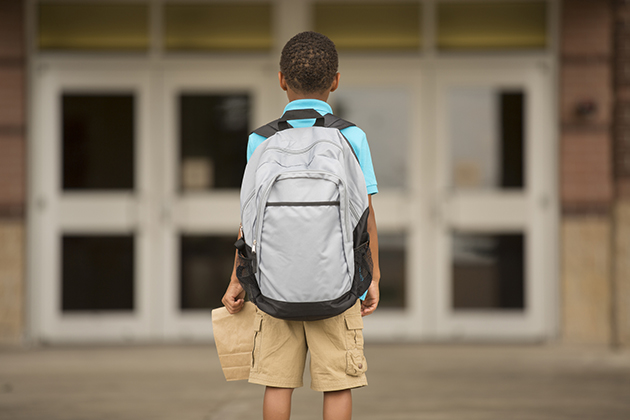 In the wake of the Valentine's Day massacre that killed 17 students and staff at Parkland, Florida's Marjory Stoneman Douglas High School, some say the public is growing numb to school shootings. But some parents are taking bold steps to ensure the safety of their children, including the purchase of bulletproof backpacks.

Yes, you read it right: bulletproof backpacks. In addition to holding the usual school-related items, they also double as bulletproof shields. As one parent aptly describes the appeal of these backpacks, they provide "an immediate point of action, a grab at any sense of control over the insanity we're living in."

Isn't that the truth? And a booming school security industry understands well the anxiety of parents, teachers and public officials in the school shooting era.

Guard Dog backpacks don't come cheap — the cheapest one is $189. After the Parkland shooting, the company has announced that 50 percent of proceeds will go the victims' families.

But backpacks are only one among many other available school security-related items. Since Sandy Hook, schools and universities have spent about $768 million on security measures in 2014. This was predicted to rise to $907 million by 2016, according to the IHS Technology research company.

The question is whether other services, used for teacher raises and school counselors, have been slashed to pay this hefty security bill.

High-tech surveillance is another option. Las Vegas began installing cameras in 2000. By 2014, the city had "12,000 surveillance cameras in schools, buses, thoroughfares and casinos."

In Florida alone, school security measures are estimated to cost $100 million a year. For those who think armed officers are the answer to the shootings, the American Bar Association estimates that a cop in every classroom would cost $3.2 billion a year.

In general, the budding school security industry is positioned to take advantage of institutional responsibilities to protect vulnerable children. This position can give way to egregious spending absurdities — all in the name of saving children's lives. (Not to mention the cost of turning schools into lockdown facilities more akin to prisons.)

Besides profiting from people's school safety anxieties, another concern here is privacy. One of the most common security solutions is more cameras. But consider this: Long Island-based company, Digital Fly, provides real-time social media monitoring linked to a school alert system.

Digital Fly's target issue here is preventing school cyberbullying and threats, and we see how the need for security can clash with privacy rights. Digital Fly uses geolocation to monitor social media within a 10-mile radius of a school campus. What they are looking for is "potential threats to students, staff members and property" — based on chosen keywords like "guns" and "kill." The service also offers a tip line so students or parents can report tips anonymously.

This is a sensitive issue. Marjory Stoneman Douglas student, Emma Gonzalez, claimed "neighbors and classmates knew that [the shooter] was a big problem," and they reported this to school authorities "time and time again since he was in middle school."

School authorities didn't do enough in this latest case, neither did the FBI, who also received a tip about the shooter's stated aspiration to be a professional school shooter. In these circumstances, it's difficult to argue that an anonymous tipline, provided by a private company, is a bad idea.

In the days and weeks ahead, as more remedies for school shootings get tossed around and marketed, and bulletproof backpacks become the "new normal," we have to wonder what will put a stop to these devastating tragedies. Surely, direct security infrastructure measures are important, but these must be balanced by other actions to ensure that what's done in the name of security is in the best interests of all involved.