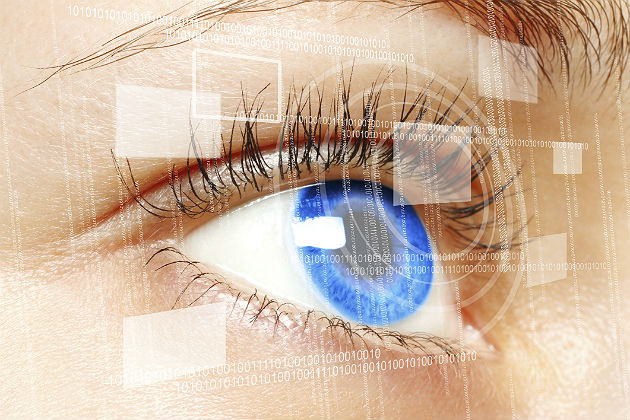 Researchers recently reported in the Journal of the American Medical Association that nerve fibers in the eye are an early indication of Alzheimer’s disease. Two different groups report that the imaging of retinal nerve fiber layers in the eye show correlations to early disease and may even be predictive of disease.

The eye, and particularly the retina as an extension of neurologic tissue, can provide information about disease status in the brain. The concept is not new, but the means to capture images with enough optical resolution to visualize the axons and ganglion cells has been evolving over the last two decades.

The most relevant technique is Optical Coherence Tomography (OCT). The images are much like ultrasound, but rather than bouncing sound waves off tissue, OCT bounces light waves into and off tissue.

Current technologies have an axial resolution of tissue of five microns, enabling the visualization of some individual structures and the ability to quantify tissue volume. 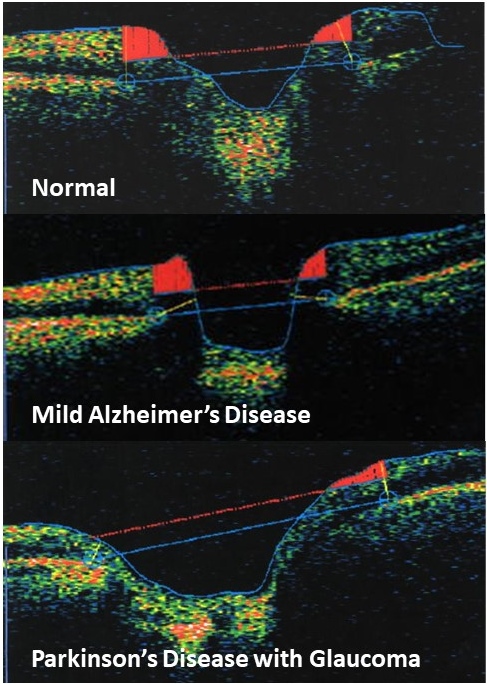 An example of an OCT reading, with red representing a retinal nerve fiber layer.

Researchers have been evaluating the volume of the retinal nerve fibers and relating it to Alzheimer’s disease for over 15 years. The first paper demonstrating that a reduction in retinal nerve fiber layer thickness is correlated to Alzheimer’s disease was published in 2001 in Clinical Neurophysiology by Dr. Vincenzo Parisi from Clinica Oculistica Università di Roma Tor Vergata in Rome.

This author published images demonstrating retinal nerve fiber layer thinning in diagnosed Alzheimer’s disease in Neurology in 2007. There are more than 85 publications discussing the use of OCT to identify and follow the progress of Alzheimer’s disease.

The recent studies involved longitudinal assessments of large populations. One of them was led by Dr. Unal Mutlu from the Department of Epidemiology at Erasmus Medical Center in Rotterdam, Netherlands.

He did a prospective population-based study from 2007 through 2012 using participants over the age of 45, having reliable OCT images, and then following them through 2015 with evaluations for dementia. 3,289 participants were included and of these 41 already had been diagnosed with dementia.

Denise A. Valenti giving a lecture on the use of OCT for recognizing Alzheimer’s disease at the Massachusetts Regional Pharmacology Conference in 2008.

During follow-up, 86 participants developed dementia and of those 68 had Alzheimer’s disease. A thinning of retinal nerve fiber layer at baseline was associated with the risk of later developing dementia.

A second study took place in the United Kingdom through the Biobank Eye and Vision Consortium under the direction of Dr. Fang Ko, who tested 32,038 using OCT at baseline. The average age of the subject was 56 years.

That study found that those having the thinnest region/quintile of the retinal nerve fiber layer were 11 percent more likely to fail at least one of the cognitive tests used.

Upon follow-up of 1,251 of the participants, those with the thinnest two quintiles were two times more likely to have at least one of the cognitive tests be worse than at baseline. The researchers conclude that a thinner retinal nerve fiber layer is associated with worse cognitive function, even in the absence of a diagnosis of neurodegenerative disease.

The use of OCT is a noninvasive and cost-effective means to identify, follow and manage neurodegenerative disease. It is simple and non-threatening to a patient, and it is like having a photo taken of the retina.

The simplicity of such testing is important for those patients that have a dementia risk. The most recent studies are important in that they have demonstrated that OCT may be used as an early biomarker of disease. Thus, it provides earlier opportunity for treatment and possibly even prevention.