New Orleans’ new terminal puts it in the big leagues 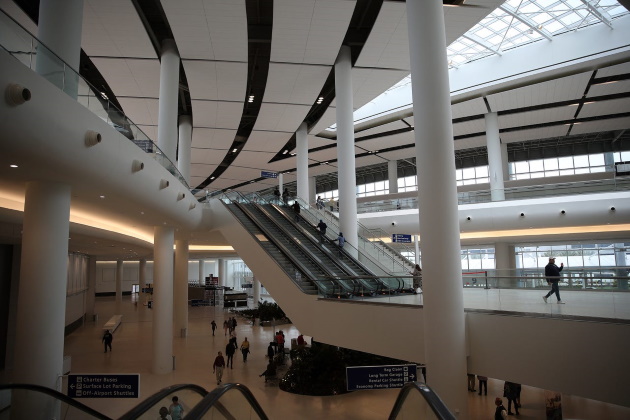 Built on the north side of the airport, the new terminal completely replaces the aging terminals on the south side of the runways, which were consistently the focus of poor passenger opinions and failed to live up to the expectations of a modern airport and famous global destination.

Unlike the 50-year-old terminal it replaces, the new facility at New Orleans offers high ceilings, plenty of light and modern amenities. It includes a 972,000-square-foot atrium, plenty of check-in space, and a single security checkpoint with 15 TSA lanes, including the latest screening technology.

Landside, there are new garages for both short- and long-term parking with almost 8,000 spaces, plus dedicated cellphone and taxi lots.

Airside, the terminal has three concourses with 35 gates. A carefully designed apron and taxiway system ensure there will be no bottlenecks for aircraft taxiing to and from the runways, with delays an issue for the airport in the past.

For passengers awaiting flights, there are large lounges with plenty of seating and electric charging point, plus new concessions which show off the best of New Orleans cuisine, including both Leah’s Kitchen (Level 2) and Emeril’s Table (Concourse B), from well-known local chefs Leah Chase and Emeril Lagasse. New bars offer passengers a taste of the city’s famous cocktails before their flight.

New lounges such as Delta’s Sky Club are also found in the new terminal, wowing frequent flyers who felt the old airport lacked space and modern amenities. This 4,600-square-foot facility is designed with local influences and includes a viewing terrace overlooking the apron.

Construction delays have so far put the new terminal back almost two years, but with the opening ceremony and finished result, all that is forgotten as New Orleans finally has an airport to put it on the world stage.

With MSY having welcomed new international service recently from British Airways and Air Transat, the timing is perfect as the airport looks to add more long-range connectivity to capitalize on the city’s important tourist appeal. It still has plenty of capacity to grow in this respect, especially as East and West Coast airports fill up. The new terminal was built with expansion in mind, and a fourth concourse could easily be added.

But the opening was not all smooth sailing. Kenner Police Department were monitoring traffic on the first day of opening to understand how roads such as Interstate 10 would cope with a sudden influx of new vehicles every day where previously the airport was accessed via different routes.

All of the airport’s airlines have switched to the new terminal, leaving the old facility ready to be demolished and the site redeveloped. This means that no passengers will need to endure the old cramped facilities any longer, instantly propelling New Orleans into the leagues of America’s best airports (it was voted among the worst in a recent survey).

The move to the new facility was completed in one swoop overnight, with celebrations for the last flight out of the old terminal and the first flight in to the new.