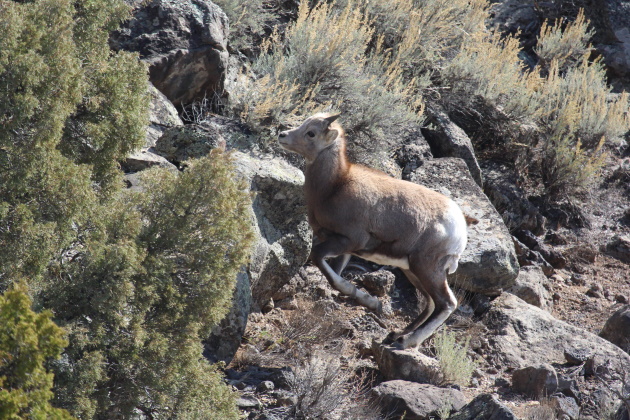 Bighorn lambs can weigh as much as 70 pounds during their first winter. (Photo by Chester Moore, Jr.)

If looks could kill I would have been a dead man. The ewe fixated on me with a focused intensity.

It was obvious she knew I was a stranger in her rocky domain, and I suspected her to bolt at any time.

But as clacking sounded from the rocks below, she broke the stare and looked down.

Up came her baby, a gorgeous Rocky Mountain bighorn born this spring and already masterfully moving up through this gorgeous and treacherous gorge.

After the lamb came up, eight more bighorns moved up into the plains above the gorge. It was an incredible sight and is proof of New Mexico’s hard work to see its bighorn populations increase.

According to Nicole Tatman, big game program manager for the New Mexico Department of Game & Fish (Game & Fish), the state has populations of both Rocky Mountain and desert bighorns.

“We actively manage both herds and are always evaluating populations and areas where we can translocate sheep from abundant herds into areas that need more or that currently do not have sheep,” Tatman said.

In 2018, Game & Fish officials released 40 desert bighorns in Alamogordo and over the last decade stockings of Rocky Mountain bighorns in the Rio Grande Gorge and near Bandelier National Monument have proven successful.

The state is able to conduct translocations from its own herd and has seen significant progress in its sheep program. According to Game & Fish officials their desert bighorn herd was an estimated 170 in 2001 and now sits at over 1,000. Rocky Mountain bighorn populations edge that out and are expanding into suitable habitat.

And suitable habitat can change.

The tragic Las Conchas fire that consumed more than 150,000 acres created treeless habitat in the mountains that is perfect for bighorns.

Controlled fire is a practice that benefits sheep along with other wildlife like New Mexico’s Merriam’s turkeys, so it is interesting to see that even after something as catastrophic as that fire, hope can arise.

I plan to do more expeditions into New Mexico in search of bighorns in the next year, focusing both on the desert and Rocky Mountain herds. 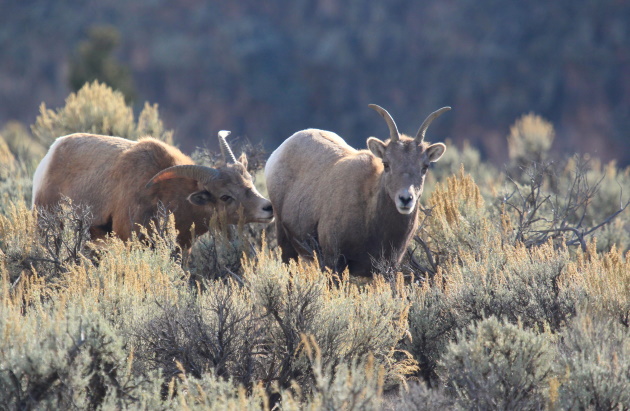 Chances are this young ram won’t be contributing his genetic this year but he sure showed an interest in this ewe. (Photo by Chester Moore, Jr.)

Just before the sheep I found disappeared into their rocky habitat, a young ram tried to make a move on an older ewe. You could tell it wasn’t quite his time yet, but the instincts are there.

And those instincts to reproduce, persevere and expand will keep hope alive for New Mexico’s bighorns in the coming years.