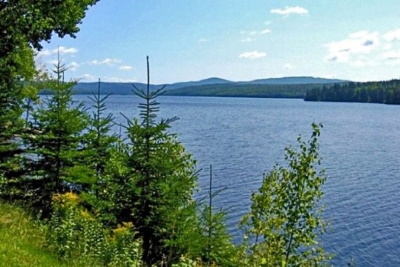 The North Woods area of New Hampshire is such a distinctively relaxing American region. It reminded us of our travels through British Columbia.

At the Moose River RV Park in Saint Johnsbury, Vermont, locals told us to be extra careful driving on New Hampshire Highway 3. “Be very watchful of moose on the highway,” they said.

It’s starting to sound more and more like British Columbia! The countryside with the meadows and wetlands is ideal for moose yet the only animal we saw was a squirrel crossing the road. Hardly a cause for an accident!

We traveled NH 3 on a winding narrow road, climbing to the highland summit, then descending into stunning valleys among unspoiled foothill ranges within a wilderness setting of pale blue skies. We listened to the sound of flowing mountain streams, while viewing green fields and meadows with multi-colored wildflowers.

There is something unique and soothing about wetlands and mountain meadows; besides being an ideal home for moose with the rich eerie song of the loon echoing across a clear lake, there is the sound of mountain relaxation.

In and around villages and hamlets many summer homes were for sale, mostly lovely lakefront cottages. There are not many large towns in the North Woods, and a person must travel over an hour to reach a grocery outlet the likes of Walmart or Safeway. However, the many quaint shops, country stores and roadside farm markets provide all the necessities of living.

In Pittsburg. N.H., we found an old general store — Diane loves old country stores with squeaky doors, wooden floors and open beams. The building was showing its age from the many years of neglect from the weather. What we thought was notable was the “Ice Cream Shoppe” concealed in the back of the building. My goodness, we almost missed it, just a small rusty sign hanging from an open beam showed us the way.

A very polite young lady described the various flavors and there were many. It’s a warm August afternoon and we’re retired, so why not indulge with a double scoop? I just could not believe the size of the individual scoops — they were enormous. This must be the best ice cream shop in the North Woods.

For a couple bucks we enjoyed some of New Hampshire’s finest ice cream, not soft serve, but the real creamy, chocolatey kind. You’d be hard-pressed to find a similar buy in our coastal states. We love making these simple but rewarding discoveries. It was a beautifully clear day; the sky was blue and the sun bright, so we did what was natural and took a hike. After some discussion we decided on the river trail. The trail head was well marked and being a great trailblazer, I knew exactly which way to go!

It was a forest trail that worked out our old joints and muscles. We were made to climb hills, cross over logs, traverse rocks and duck under tree branches. It seemed like all our body parts were given a great cardiovascular exercise with all the bending, scrambling, balancing and climbing we encountered beside the river.

Along the way we met an anxious father looking for his young son, who took the family canoe and headed upriver to fish. He had been gone much too long and his parents were worried. Later he was found a little further up river testing his canoe skills against some whitewater rapids. In his paddling escapade and enjoyment of the challenge he had simply “just lost track of time.”

Have you ever watched a skilled fly fisherman? The way they handle the rod and reel with such artistic and instinctive precision is captivation. With several beautiful rainbows in their basket these guys knew exactly what they were doing.

We continued our hike over a mile upstream and came upon two major whitewater areas where canoeing and kayaking would be exhilarating. Shortly thereafter the trail ran thin.

Do we cross the river and make our way to the River Road? Or do we cut across the swampy meadow and hit the snowmobile trail?

But, but what about my trailblazing skills?!

A few mornings later, we got an early start towards the Fortress of Quebec and the great walled city of Canada. But first, we drove into Pittsburg and filled the tank with gas. With a full tank, we could drive Beast into and out without a costly Canadian fill.

Leaving Lake Francis, NH 3 north passes at least three mountain lakes ending at the U.S.-Canada border. For some reason they named them Connecticut Lake No. 1, No. 2 and No. 3. Personally, I believe they deserve better names, like High Meadow, Wilderness or some native name significant with the area. Someone lacked imagination.

The crest of the mountain is the U.S.-Canada border. The Canadian border officer was delighted to meet us. Passports are so vital today crossing the border whether it is with Canada or with Mexico. As we left the station and proceeded, a magnificent view unfolded as we began to descent into a splendid glade.

The valley was wide, open and gorgeous. Colorful wildflowers were everywhere. The farm lands extended beyond the horizon, and rows of green corn tassels, cut grass with fields of bailed hay, and livestock dotted the land. It was like driving into the Shire, the land of the Hobbits.

At the bottom of the clearing was a small quaint village with an open café on the corner. As we turned north the locals greeted us like we were somebody special. I was especially awestruck with the French ladies cheering, holding wine glasses high in the air and shouting “Bonjour.” It was Canada saying, “Welcome to Quebec.”