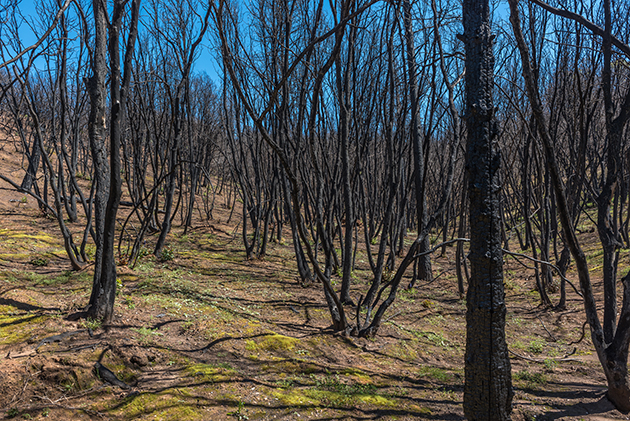 Since much of the brush in the mountains has been burned off, nothing exists to absorb rainwater.

As 2018 kicked off with most of the East Coast enveloped in freezing temperatures, news about the West Coast's fires provides some reprieve as Southern California's Thomas Fire is contained.

However, new concerns of flash flooding and mudslides replace fires as the primary threat. Fires allow residents to prepare to some degree, but floods can happen quicker and cause massive damage.

With up to six inches of rain in the forecast, massive debris flow is likely in the upcoming days.

Beginning today at noon, mandatory evacuations have been called for in areas below the Thomas, Whittier, Sherpa and Rey fire burn areas. On Sunday, residents of Montecito filled sandbags to prevent debris flow and mudslides.

The area under the highest flash flooding threat is where the Thomas Fire burned. The Thomas Fire's massive blaze started Dec. 4 about 60 miles northwest of downtown Los Angeles. It destroyed 1,063 structures, burned approximately 281,893 acres and caused 50,000 people to evacuate.

Regarding industry, one of the greatest hits was to agriculture's avocado sector. About 10,000 acres of agriculture land was damaged or destroyed by the fire. This includes about 6,603 acres of avocados, 1,767 acres of lemons and hundreds more acres of citrus fruits, nuts and berries.

Amid industry and general recovery efforts, this week's forecast for rain is accompanied by serious concerns about flash flooding and mudslides — ushered on by the loss of vegetation that provides seeds for regrowth.

Usually, a half-inch of rainwater can be soaked up by lush vegetation in the mountains above coastal Santa Barbara county. But since much of that brush has been burned off, nothing exists to absorb rainwater. This is what causes debris to flow rapidly downhill into residential areas.

Hillsides are in poor shape after recent fires. Burn scars occur after fires, where a hydrophobic, oily sheen replaces regular vegetation. When the heat is intense, a moonscape is created, leaving nothing intact. The drought also weakened root systems, which further destabilizes hillsides.

In a complex cycle whereby rain is both a promise and a threat, the lack of uphill vegetation buffers has the public prepared for mudslide scenarios that will carry sticks, heavy metals, brush and debris downhill.

As in the case of large fires that are hard to contain, flash flooding is also difficult to prevent. One way to prepare for flooding is to use sand bags, turbidity curtains and retention basins that keep surface-level sediment from flowing downhill.

While officials state that such blocking mechanisms will be in place by the end of January, the first surge of storm runoff will not be diverted. We will see the impact of this runoff in the upcoming days.

Water quality and access also becomes a threat, as water pipes can be snapped, displacing supply lines. This happened during the La Conchita mudslide of 2005, when water had to be delivered to residents after supply lines were displaced.

It does not take a lot of rain to get soil and rock moving, and with the protective chaparral vegetation almost 100 percent gone, the thousands of acres of "baked earth" will flow downhill.

There's no rest for the weary, as the relief of contained fires brings with it new threats. So far, the estimated damage caused by the Thomas Fire is $300 million.

Unfortunately, new damage expected by this vicious cycle atmosphere requires Southern California residents to prepare by staying alert and take it "one natural disaster at a time."