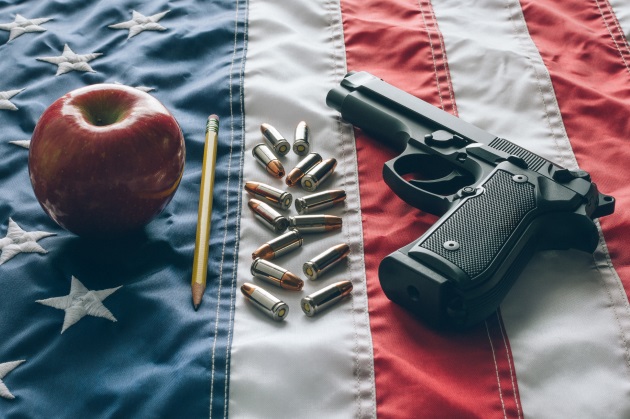 Everyone seems to have a solution for safer public schools, but whose vision will guide the sweeping changes required for real school security? The National Rifle Association (NRA) or the National Education Association (NEA)?

Last fall, Education Secretary Betsy DeVos, who also chairs the Federal Commission on School Safety, claimed she does not automatically favor federally mandated teacher weapons training. Instead, she describes the arming of classroom teachers as a "personal choice" for individual schools districts.

States are responding in kind, with legislative attempts to put more guns in classrooms — and other less dramatic, but equally controversial, security measures as well.

Sure, armed teachers is a sensationalistic headline, but it’s also becoming more of a reality as state legislatures could roll out American Legislative Exchange Council (ALEC)-style model legislation to train teachers in weapons and classroom defense tactics, increase campus surveillance and social media reporting, and other controversial proposals.

Let’s be clear here: armed teachers are not exactly new. But the national climate requires more school districts to tackle the issue of safety head-on.

The Valentine’s Day 2018 shooting in Parkland, Florida, catalyzed states to heighten school security measures. In the past 10 months, "17 bills have been proposed in 10 states," according to NBC News. This indicates that school safety, and public education generally, has become a bipartisan hot button issue. Before that, the 2012 Sandy Hook incident galvanized debates about arming teachers.

The North Carolina legislature is currently debating paying teachers more to receive police-level weapons training, rendering them "teacher security resource officers." Mark Jewell, the president of the N.C. Association of Educators (NCAE), swiftly responded: "It was just unbelievable to see something like that come out...If you want a raise, become a part-time school resource officer? That is not a solution."

Mississippi's legislative efforts to arm teachers did not pass; but the state’s School Safety Act of 2019 has security provisions that are controversial enough to be opposed by the American Civil Liberties Union (ACLU).

Weaponized classrooms surely raise teachers’ stress levels. If they decide not to participate in on-campus policing programs, they could be perceived as less dedicated to student safety. If they do decide to participate, they are involved in a massive social experiment we have yet to fully understand.

This is also a divisive workplace issue, to be sure. Linking increased pay to police-level weapons training may attract reluctant participants. How’s that for an army of the unwilling?

This is why arming teachers has become an important union issue. This is also why we see Connecticut lawmakers, supported by the American Federation of Teachers and the National Education Association, attempting to ban federal funding for weapons training programs.

Title IV of the Every Student Succeeds Act uses vague language earmarking funds to improve "school safety and conditions for learning." Whether this will include money for weapons training is hotly contested.

In one poll, 73 percent of educators oppose being armed.

Teachers may not be so eager to brandish weapons, but they haven’t feared union activism as of late. 2018 saw teachers’ union activism surge, resulting in concrete victories following the now historic West Virginia strike. Teachers’ unions all over, including in Illinois, California, Oklahoma, Arizona, and Colorado, won higher pay and some key security features: more staff and smaller class sizes.

While administrators are frequently criticized for being out of touch with teachers’ work conditions, shouldn’t the unique nature of classroom work shape safety debates?

Rank and file teachers’ voices can no doubt be suppressed in the contentious world of union bureaucracy, too. Recent developments regarding dissident teachers’ voices during Oakland Education Association (OEA) contract negotiations indicate that teachers have a distinctive expertise when it comes to student safety.

A new generation of public school teachers, mostly women, and their unions may not be perfect, but they are in the trenches for school safety every day. Who’s noticing?