Millet: The ancient and controversial grain 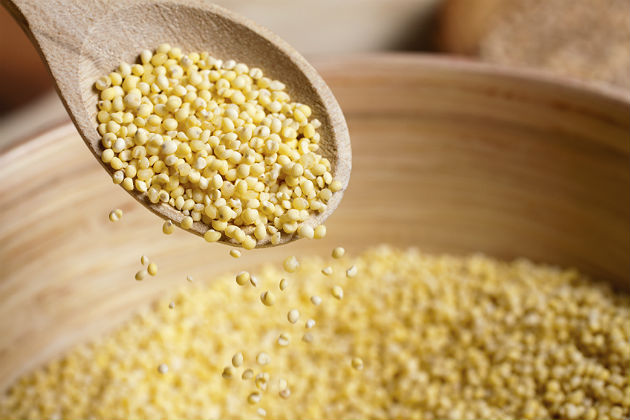 For those in search of more variety in their grains and/or a gluten-free diet, millet is an ancient grain making a comeback in the U.S. diet. Millet comes from the small-seeded grasses of the semiarid tropics of Asia and Africa. We know it as a chief component in birdseed and in some cereals, but one-third of the world's population eats millet as a staple in their diet.

Similar to rice, millet is bland in flavor and is cooked in the same manner, making it another perfect gluten-free alternative for dishes other than rice. Its color varies from white, yellow, gray or red, and its texture — which can be cooked creamy, sticky or fluffy — lends itself to many possibilities in a cook's kitchen.

If a baker is looking for a gluten-free flour substitute, millet flour can replace 25-30 percent of regular wheat flour and can be mixed with amaranth, sorghum, buckwheat and other gluten-free and corn-free flours. The combination of buckwheat and millet together makes quite an interesting flavor, and its texture adapts well to baking.

It can also be used in beverages. In Taiwan, millet is used to make its own variety of beer. In East Africa, an alcoholic drink, Ajino, is made from fermenting millet and/or sorghum. In Nepal, Rakshi is a clear millet alcohol that is similar to taste as sake. And finally, in Bolivia and Bulgaria, millet is fermented to create Boza, a thick creamy lactic acid beverage with a low alcohol content (about 1 percent or less).

The actual nutritional value of millet varies between the different types of millet, but it is high in B-complex vitamins, especially niacin, folic acid and B6. Millet is also high in manganese, copper, phosphorous and magnesium. Magnesium aids in lowering blood pressure, reducing migraine attacks and asthmatic events.

Eating millet is controversial, because millet is a goitrogen, which was considered to suppress thyroid function starting in the 1950s. Flavonoids contained in millet are suspect in inhibiting iodine uptake into the body causing goiters.

Scholars in the paleo camps swear it off. According to them, any food that is a goitrogen is adverse to a healthy lifestyle and should be avoided. But other foods on the goitrogen list are broccoli, cauliflower, kale, Brussels sprouts, cabbage and other vegetables in the Brassica family. Also on the list are peanuts, strawberries, soy, flax seeds, wheat and many more.

However, in the last five decades, studies have shown that goitrogens are not the cause of goiters. Inflammation from the autoimmune disease, Hashimoto's thyroiditis, is the culprit. Furthermore, studies have shown that the benefits from foods labeled as goitrogens outweigh any harmful effects. Most foods contain flavonoids, and many are rich in the very same types as are contained in millet.

As within any one food group, moderation is the key. No one food is great for you, if that's all you eat. Any doctor, nutritionist or dietician will tell you each person's diet needs to be tailor-made to find the right fit of food combinations for optimal health and balance for that person.

Millet can easily become a rotating part of anyone's diet, so enjoy the variety and gain the benefits of its nutritional qualities.