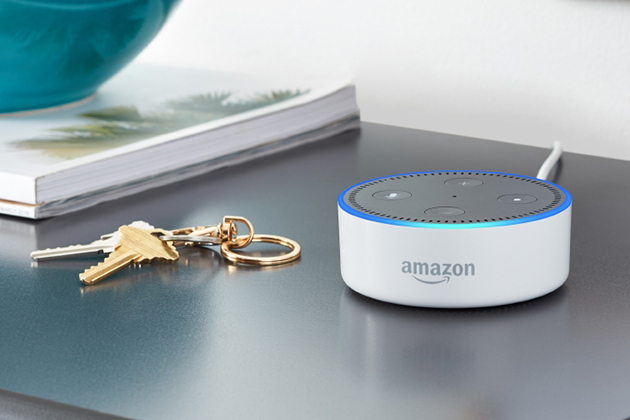 Police in the U.K. have a new recruit: Amazon's Alexa, the "smart" virtual assistant. In a new experimental initiative launched by the Lancashire Constabulary, Alexa will log reports of crime and provide daily updates to the public. The police will use a dedicated app to issue local news briefings to Amazon Echo owners.

Voice recognition or voice-enabled technology can help disseminate information without the need to dial in. Residents can ask Alexa about the latest happenings on their street or in their area, and the device will keep them updated on crime statistics and connect them with the police in case of emergencies.

The police also plan to augment their digital footprint by using smartphones to relay information, useful phone numbers and circulate photographs of missing people. This is meant to ease public-police access and reduce call center overheads.

This is not the first time Amazon has been linked to crime-fighting. Earlier in 2017, an Arkansas man accused of killing his friend allowed the prosecutor to access data from an Amazon Echo present at the crime scene.

Initially, Amazon rebuffed the request, but when the suspect himself OKed it, Amazon provided the data to prosecutors. According to the defendant's counsel, he was innocent and had nothing to hide, and handing over these recordings reflected that. The charges against him were later dismissed.

In another case, Alexa called police to report a domestic violence case, and a woman and her child were prevented from being seriously harmed. A New Mexico man was arrested for the incident where he allegedly beat his girlfriend and threatened to kill her.

Their conversation was inadvertently picked up by Alexa when the man asked, "Did you call the sheriffs?" Since it was connected to the landline, Alexa took it as a command and dialed 911. It may not have been a deliberate call, but the way the device functioned that day is nothing short of amazing. It saved a life, or maybe two.

But not all agree with the amazing part.

Technology is integral to our lives, and authorities are increasingly seeking evidence from smartphones, laptops, computers and even video games. Now it's time for smart speakers and voice assistants.

However, the use of these new technologies could lead to a whole range of legal and privacy issues. Not everyone is OK with the fact that these devices are listening to us. Companies like Amazon understand these fears, which is why they pushed back against the prosecutor's request for the recordings in the Arkansas case.

When it comes to crime, these devices could record sensitive data and potential evidence that is important for law and order. But the issue is also about the First Amendment and privacy rights.

Similar questions are being raised in the UK. The use of artificial intelligence could save public resources and allow the police to concentrate on more serious cases. But privacy issues aside, data stored in American servers could have international legal implications as well.