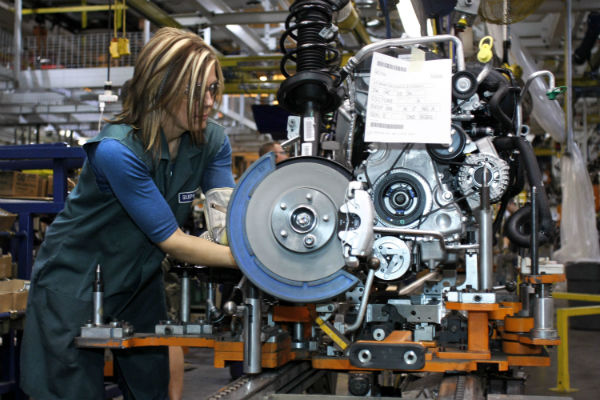 Ever since President Donald Trump made an increase in manufacturing jobs one of his key campaign promises in 2016, many Americans waited to see if this promise would come to fruition or if it was just another empty political slogan to be dusted off and then returned to the post-industrial, outsourced, and downsized U.S. production heap.

The end of 2018 was a warning, with manufacturing production numbers dropping from 59.3% in November to 54.1% in December, according to the Purchasing Managers’ Index.

This number, known as the PMI, is provided by the Institute for Supply Management (ISM), and is generated by a monthly survey of 400 managers in the areas of inventory, employment, supply deliveries, new orders, and production.

Production at factories dropped at a 1.1% annualized rate in the first quarter. That was the first quarterly drop since 2017’s third quarter, and should be cause for concern considering changes afoot for major industry players like General Motors and Boeing.

While PMI numbers do not reflect production changes since the Boeing 737 Max 8 was grounded, this action is likely to cause ripple effects with numbers available as early as May for April 2019.

"The delivery stoppage and production slowdown of the 737 MAX will be a drag on production and orders data in the near term, and may subtract as much as two tenths of a percentage point from second-quarter GDP growth," according to Wells Fargo Securities senior economist Tim Quinlan.

Manufacturing is 12% of the overall U.S. GDP today and half of all exports. In 1970, it constituted 24% of the economy. Such a dramatic, five-decade decline has many on pins and needles. Are the recent numbers circumstantial, or do they represent the fundamental shift away from U.S. manufacturing that so many have warned of over the years?

The usual culprits, including the ongoing Brexit battle and the trade war with China, are cited as causes of declining manufacturing.

The U.K.’s Stephen Phipson, CEO of the MakeUK industry lobby group that represents 5,000 companies, explains that Brexit’s delay has frozen manufacturing as well. "More than 70 percent of MakeUK’s members have frozen investment as they divert cash to building up inventories in case a no-deal Brexit strangles supply lines...Those that are still investing are doing so in warehouses and offices in continental Europe — money that could otherwise have been spent in the U.K."

Ripple effects run far and wide these days in the anxious manufacturing world. Of immediate interest will be how central the manufacturing slump will be to 2020 presidential election debates. And how many of these manufacturing jobs will be green collar?