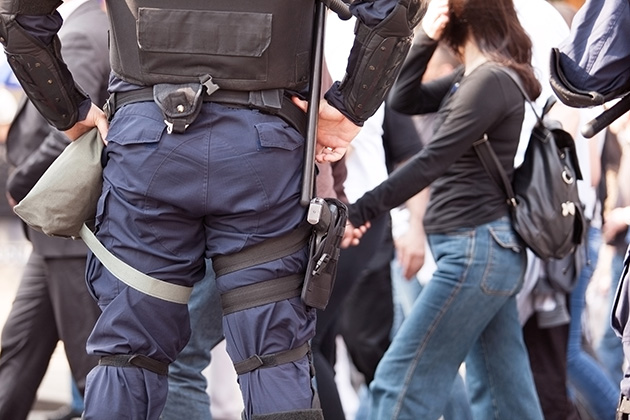 It's a sad world where innocent kids must fear going to a concert. But the rise of terror attacks that target concerts and events with large crowds is now a constant threat.

The latest example was the bombing on May 21 when attendees of an Ariana Grande concert in Manchester, England, saw a violent end to their fun evening. The blast killed 22 people and injured more than 100.

In the aftermath of the attack, law enforcement agencies across the U.S. have ramped up security efforts and deployed more forces in heavily trafficked areas.

At the U2 concert Friday at AT&T Stadium in Arlington, Texas, police officers sporting body armor and automatic weapons patrolled the premises. The same scene greeted spectators at the Houston show two days earlier. Clearly, this was a direct response to the Manchester attack.

In New York City, tourist hot spots and event venues are being patrolled more. These include Times Square, bridges and tunnels, mass transit systems like Penn Station and Yankee Stadium, Madison Square Garden and Barclays Center among others.

The addition to the forces also includes highly trained counterterrorism officers, explosive detection dogs and random subway bag-check points. However, the officers of the NYPD and state law enforcement agencies were quick to declare that there are no new threats and residents should not panic. Their efforts to increase security are precautionary at this point.

The U.S. Department of Homeland Security is also closely monitoring developments in the U.K. and the related investigation to understand what implications it could have for the U.S at large.

In Baltimore, police have also announced heightened security measures for every public area where large groups of people gather. Game arenas and stadiums are of particular concern for possible terrorist activities.

Acting on information received from the Joint Terrorism Task Force (JTTF), they have increased security checks and patrols for areas that may be vulnerable to similar terror acts that Manchester faced. Stadium authorities are working hand in hand with the police to cover all aspects of security procedures.

It's not just the U.S. that is worried about further terror attacks either. Big European cities have been beefing up their security as well.

Lately, Europe has been the focus of many such terror attacks, and the Manchester blast has only added to their worries after the horrific Paris and Berlin attacks carried out by ISIS.

Along with additional forces, Berlin police will also be carrying submachine guns, and armored cars will flank concrete barriers blocking off the areas during major events. The police will aim to do everything that they can to prevent a possible attack. Italy, Spain, France, Austria and Belgium are doing the same as well.

One important point that continues to be stressed be security experts is that we cannot afford to be complacent. A terror attack like the Manchester bombing spurs us to action, and then security rules are relaxed after a few days, which is exactly the kind of opportunity terrorists are looking for. We must be vigilant at all times.