Maintaining the edge: How much practice is enough? 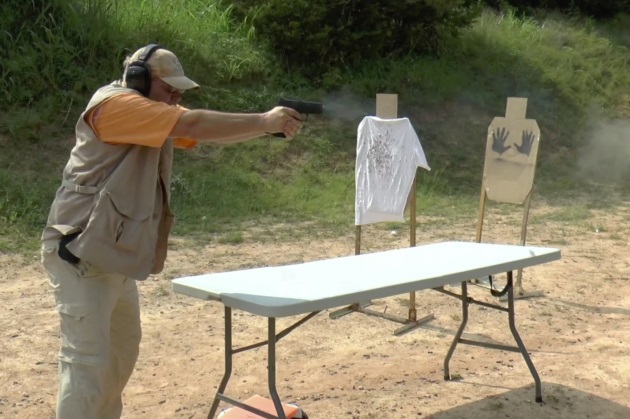 A good friend and I recently explored the topic of how much practice — dry practice and range time — is enough to maintain acceptable levels of defensive shooting skill.

I define acceptable skill level from a self-defense perspective as the ability to fire Sharp Shooter on an IDPA classifier, pass the FBI qualification, or achieve similar performance on a state or nationally recognized course of fire (Massad Ayoob Group’s MAG 20 live fire qualifier, for example).

My friend Steve is an IDPA six-gun Master (achieved with the original IDPA 90 round classifier) and his shooting skill level is well-documented; however, as a result of medical challenges, Steve was effectively unable to practice his pistol skills for six months. In April, he had recovered enough to begin practicing once again, and we documented his progress over five practice sessions.

When he is at his peak, Steve can shoot Master on-demand on the IDPA 5x5. In the first practice session he wanted to assess his skill level. With no warmup, he fired high Sharp Shooter on the IDPA 5x5 classifier. Clearly his skills had deteriorated; however, he maintained an acceptable level of shooting ability despite no practice.

We then fired the old IDPA 90 round classifier and noted some deterioration in group size and resulting dropped points at the 15- and 20-yard strings. So while his self-defense performance at 10 yards or closer had not appreciably suffered due to no practice, his skills at longer distances clearly had.

He also noticed that his ability to correctly draw was not as certain and he fumbled the draw more often that he would have under normal circumstances. Additionally, he was having some difficulty with his sight alignment and noticed a tendency to peek at the front sight and therefore shoot high on the target.

Through documenting these practice sessions, Steve discovered that some skills deteriorated more than others. We recorded several of his shooting strings and identified specific issues that he is focusing on correcting. He identified his goals for improvement, broke down each specific movement or task necessary to accomplish the goal, and planned the next practice sessions.

In subsequent practice, we updated his deliberate practice plan based upon the progress he was making and adjusting for new issues that we discovered. We also shot drills specifically designed to address issues that Steve had identified in the initial skill assessment such as two shot draws, transition drills, 5x5s at varying distances, and others.

Steve’s skills began to improve (as you would expect) to the point where he now shoots high Expert on the 5x5 classifier and occasionally shoots Master. He still has not recovered to his pre-hiatus accuracy levels at greater than 10 yards; however, his abilities at 10 yards or closer are getting back to normal. Steve’s normal time splits between shots averages between .15 and .17 seconds with many splits much faster. See him in action in this video: Steve’s Perfect Run.

By practice session three, his average splits between shots was .16 seconds and he was able to keep the group in the IDPA zero down ring at 7 yards.

Steve is well on the road to re-sharpening his shooting edge. Steve has regained his trigger speed and overcome the fumbling issues associated with the draw. The arc of motion (and resulting group size) is a bit more challenging; however, as he continues to recover his strength and stamina and focuses on grip and stance this will improve.

Deliberate practice builds confidence. Real confidence comes from being able to consistently nail a qualification course, stage, or a drill and knowing that this isn't a coincidence but that you can do it correctly on demand. Real confidence is knowing precisely how to correct a problem or misstep because you have identified the key movement or physical factors that are necessary to correctly perform the action every time.

We can improve our shooting through specific exercises, standard tests (qualifier or classifier courses of fire), and drills using deliberate practice methods.

I still admire the IDPA classifiers--both the 90-round original and the current 72-round classifier. The team that put the current IDPA classifier courses of fire together captured the 10 major skills you must perform to shoot a match successfully. Conveniently, these are the same skills you should master to improve your defensive shooting skills.

We can break each major task down into subtasks (that also must be performed correctly), then apply the deliberate practice methodology to hone our skills. We can improve many of these tasks through dry practice as well and thereby save our range time for tasks that can only be performed on the range.

Time is our most valuable commodity, and we will never have enough. If you're going to practice, you might as well do it right. How much practice is necessary to maintain your self-defense shooting skills? Perhaps not as much as we might imagine.

If your goal is an acceptable level of self-defense shooting skills, then modest dry practice with a periodic focused range session is probably enough. If you wish to improve beyond modest skills, then a planned practice regimen with specific goals and milestones is very helpful.