Living with the 718 Cayman: The first 6 months 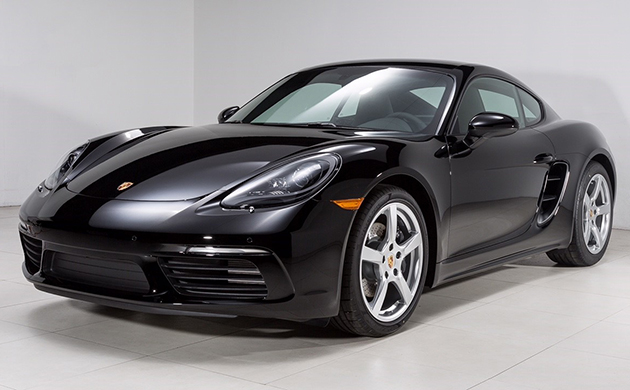 I took delivery on my 718 Cayman on July 1, a little more than six months ago. The next weekend, I drove 150 miles to Monticello Motor Club for the Stuttgart Challenge in a monsoon. Within weeks, the Northeast was hit by two successive heat waves of nearly 100 degrees, and now more recently we've seen as many subzero cold fronts.

I think it's safe to say that in this time frame I have seen the breadth of atmospheric ailments — none of which has influenced when or how I drive, as the 718 remains my daily transportation. With the exception of a deep snow (where it's a substandard plow), the Cayman gets me to wherever I need to be as well as any car I've owned.

My first Porsche was a Cayman of the original variety — a 2009 base model with a manual gearbox. I drove it 75,000 miles before trading it on a 2016 Macan S. I loved the classic look of the first generation Cayman. The hood sloped progressively to the back, ending on haunches that sat over the drive wheels like a cat gathering energy to pounce.

Part of what I like about Porsche's commitment to this model in general is that the Cayman is capable of almost anything. Sure, I can only bring one friend with me at a time, and I'm not planning on rumbling through a forest as I certainly could have done in the Macan, but getting around in either Cayman has proved to be insanely fun.

Six months and 6,000 miles is plenty of time to step back and assess the worth of any car. My perspective in this case is uniquely suited, as I've now owned two generations of Caymans. But conveying these differences without some form of bias is not an easy task given my curious history with the product.

I'll start by answering the first question on your mind, because I had the same one when I bought this car: What about the sound?

Defending the transformation from that gloriously-classic flat six to a 2.0-liter turbocharged four is almost a daily occurrence, so I no longer make a concerted effort. They are simply two different approaches to propulsion.

I won't deny that I miss the noise and instant response from my previous Cayman whenever I tapped the throttle, especially since it was embellished with a Fabspeed Maxflo cat-back exhaust system. I've written several articles on the Zen of this experience alone.

So when I tell you the change in tone is disappointing, I do so from that perspective.

It's easier to comprehend more fully if you appreciate my automotive rearing. I grew up on muscle cars of the '60s and '70s. My 1970 Torino GT for instance was equipped with a 351 Cleveland V8 paired to dual exhaust with glass-packs. When I stepped out of the neighborhood in that monster, I shredded ear drums two blocks away.

The 718 doesn't sound particularly awful — it's sufficient in a subdued sort of way. The problem is that I have this permanent point of reference that I just can't expunge. So I went into this purchase expecting the regression, and realized a comparison of power plants wasn't even rational. The point is that engine and exhaust sound is relative.

I'll try to get past this prevalent debate and focus on other features. As much as I like the classic-looking Cayman in the original design, I really love the sculpted sharper lines of the current generation. In my opinion, the 718 Cayman is superior to the previous model from virtually every angle. Its form continues to take my breath away.

As much as I appreciate the outside, I am awed by the interior. This is without a doubt the best cabin of any car I've ever owned or driven. Once you negotiate the doorsill, you are overcome by ergonomic simplicity combined with what can only be described as a finely fitted suit. Your hands extend to controls as if by memory — truly astonishing.

The surprises don't stop there. The Cayman has continued to be one of the finest-handling production cars in the world. But the 718 steering is so flat in a corner you'd swear there is a tangible connection to the road — even more so than the previous generation. I've experienced more body roll in a go-kart, yet the ride is exceptional.

Engine noise aside, performance is stunning. The 718 is faster than its predecessor, even for the split-second that you'll wait for forced induction to spool up. If you squeeze the throttle judiciously, you can avoid the deferral of energy followed by a sudden jolt from the turbo, but you will appreciate that thrust when it kicks in at 2,500 RPM.

My 718 is equipped with PDK, and I recognize the irony of comparison to a Cayman fitted with a manual gearbox. I loved selecting my own gears, but I must now concede this task to the brilliantly engineered Porsche dual-clutch transmission with its lightning quick response, whether you flap the paddles yourself or allow electronics to decide.

Of course, no car is perfect, and the 718 Cayman is no exception. I cannot fault the design with any conviction. It is flawlessly sculpted with subtle lines and curves that compliment any landscape — as photogenic as a sunset. And there is also nothing I can think of to improve the interior. Porsche has always excelled in superior design.

But as nice as the fit and finish initially appear, I have noticed some creaks and squeaks from obscure places in the cabin — like somewhere deep within the dash or down inside the gearbox housing. I notice them mostly when the temperature is below freezing and the interior begins to warm, but this is disappointing from a car of this caliber.

The engine effort is much harder to defend. While it's significantly torquier than the original Cayman, it feels and sounds like it's working harder. The 718 Cayman is quicker than I would like to admit — it just doesn't get there with the same satisfaction.

Ultimately, I can't ignore that I will always arrive at my destination faster in the 718.

While I realize this isn't sounding like an overwhelming product endorsement, I can still declare that in a side-by-side competition, I would take the 718 Cayman over the original generation without too much of an argument. The body styling, cabin interior and overall performance of this car is simply that good.

When we leave the winter behind us, I'll swap out the snows and have my Porsche dealer sort out the gremlins I spoke of earlier — they've been pretty good at hunting down these few mysteriously frustrating nuisances in the past, and I realize I'm perhaps more particular than others. But it does rather tarnish an otherwise incredible experience.

It is difficult to present an impartial appraisal of anything when your premise is swayed by intangibles and driven by matters of the heart. The 718 Cayman has clouded my judgment and influences my objectiveness because it appeals to me in a primal sort of way, so I'm inclined to overlook its few shortcomings.

From the 356 to the 911 and now the 718, Porsche has managed to combine technology, engineering and design with history into truly amazing creations. As the stewards of these fine machines, we develop personal connections with them. And as with our friends and family, we have difficulty finding eternal fault.

Living with my 718 Cayman for the first six months has been significantly positive. I'll either learn to live with the exhaust sound or change the note by aftermarket means (as has been my habit). And I'll resolve the cabin noises by chasing down the cause or covering them up with the aforementioned upgrade.

Either way I look forward to the spring and summer activities on the PCA calendar — a chance to blast down familiar roads or poke around for new ones with my Porsche friends. And when July arrives, I'll step back and evaluate the previous year on the one year anniversary with the 718 Cayman. With as little bias as is possible for a Porsche owner.