Tom Givens and Rangemaster hosted their annual Tactical Conference from March 11-13 at the Memphis Police Firearms Training Unit facility in Tennessee. Although there were police and some military in attendance, most attendees were law-abiding citizens exercising their uniquely American rights to assemble, exercise free speech and to keep and carry guns to defend themselves and those under their protection.

The Rangemaster Tactical Conference is three days of live-fire defensive shooting, classroom lectures, participatory hand-to-hand seminars and a "standards" match. Attendees pick which classes they wish to attend from a rich agenda of interesting topics far too big for any one person to participate in everything.

Subject-matter experts present lectures on topics ranging from how to properly structure dry-practice sessions, tactical medicine, active shooters, lessons from recent trials, violent acts and actors — the list goes on and on.

Although it would be impossible for me to provide a detailed account of every session I attended, I can provide a brief overview of some of the most interesting presentations I saw. 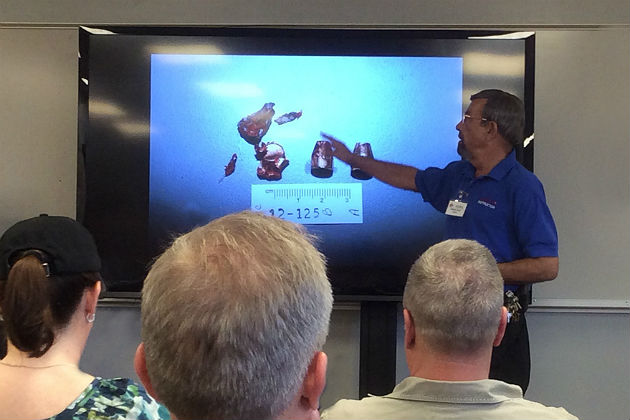 Massad Ayoob presented a lecture on "Lessons from Recent Trials."


Massad Ayoob's lecture addressed two separate incidents in which abused women were forced into circumstances where they had to defend themselves from lethal attack.

Massad explained the phenomenon of the "false positive" where the police end up treating the initial victim as the aggressor. Most of the time when the police arrive on a scene, they find the victim in a puddle of blood and the perpetrator holding the bloody knife.

Police learn patterns and begin to associate just like all of us. Massad pointed out that in a true self-defense scenario you often must hurt your attacker enough to render him incapable of hurting you. Thus it is easy for police to see you as the perpetrator/aggressor.

In both of the incidents Massad presented at the conference, the police found the original aggressor lying in the puddle of blood and convincingly imitating a victim. The lessons he presented were what to learn from the subsequent actions of the female victims and how the legal system saw their actions and treated them accordingly.

In both trials, the defendants were convicted; in one case there was a successful appeal and the conviction overturned. If you have never attended one of Massad's classes or lectures, they are well worth the time and effort. 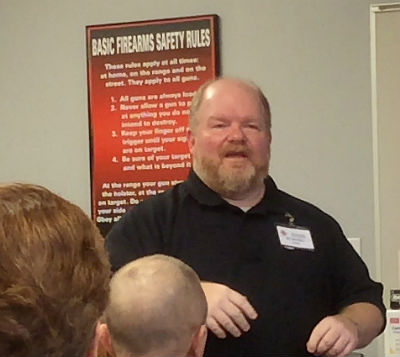 Dr. William Aprill delivered an outstanding presentation about the psychology of VCAs.

Dr. William Aprill is a former law enforcement officer, a master class shooter and an experienced forensic psychologist. He has spent years refining a detailed curriculum about the psychology of crime and teaches law-abiding citizens how to best deselect themselves as potential victims.

Aprill presented a discussion of how violent criminal actors (VCAs) view the world and their interactions with their victims. Aprill's presentation was a fascinating look into a realm that is foreign to many of us and one that many do not understand.

Many people (particularly those who have never been a VCA victim) have a preconception concerning criminals and how they think and behave. Our life experiences and how they shape us into individuals directly impact the way we think, feel, perceive the world and behave.

The exact same thing is true of the VCA, and his life experiences are probably dramatically different. VCAs truly are not like us.

Aprill uses an example of a tourist couple walking down the sidewalk in New Orleans. A man passed between them and muttered something, which caused the woman to turn and ask him what he had said. The man immediately shot her in the face, instantly killing her.

The VCA had muttered "give it up," which is New Orleans street slang indicating he was robbing them and ordering them to give him their valuables. The female tourist likely did not understand; however, the VCA perceived her question as resistance that he immediately countered with extreme violence.

VCAs operate by rules, they are just different from ours. 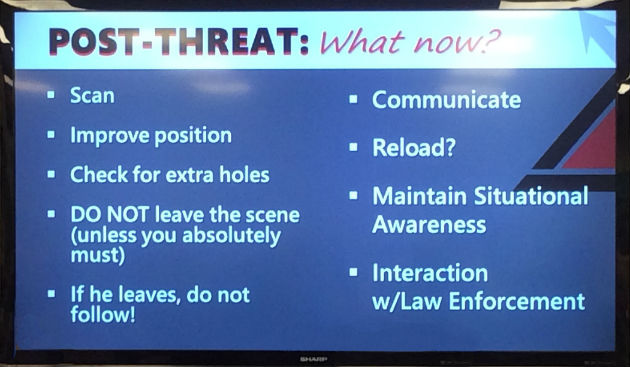 John Murphy's presentation discussed how to handle a street encounter.


John Murphy of FPF Training is a former Marine who now works for the Department of Defense. His classroom presentation was three hours of interactive instruction using surveillance videos from street robberies, business hold-ups and other violent encounters to:

Murphy's focus is how to avoid trouble if you can rather than trying to shoot your way out of the middle of a problem you didn't see coming due to lack of attention.

The second part of his presentation was live-fire range work where seminar participants practiced applying the skills covered in the classroom session with an emphasis on awareness, avoidance, de-escalation and decisiveness.

We started with inert pepper spray, learning the techniques of employing the devices. Murphy then moved on to live-fire drills, covering many of the live-fire concepts he discussed in the classroom presentation.

Marty Hayes, the director and president of the Firearms Academy of Seattle, conducted an overview of pistol disarms. Hayes is certified through the National Law Enforcement Training Center as a weapons retention, knife/counter knife, pepper spray and handcuffing instructor.

His class was informative and presented material that every responsibly armed citizen should know. Often if a bad guy is within arm's reach, it is faster and (actually) safer to go for the criminal's pistol rather than trying to draw your pistol. Great class.

A key conference side event is the Polite Society Match, named after Robert Heinlein's famous quote that "an armed society is a polite society." The pistol match involves standard skills and realistic scenarios with reactive mannequin targets that only fall when struck with solid, vital-zone hits.

Shooters must exhibit target identification and discrimination skills in addition to an ability to accurately hit under stressful and realistic conditions. Participants must use a pistol suitable for daily carry — no rooney guns allowed.

The 2017 Tactical Conference is scheduled for March 17-19, 2017, with a new location: the Direct Action Resource Center in Little Rock, Arkansas. The 2017 conference will have classroom seminars, hands-on training segments and a live-fire tactical pistol match scheduled over all three days.

The new facility has multiple classrooms, firing ranges and elaborate shoot houses, which will allow for concurrent blocks of live-fire classes, force-on-force scenarios and classroom lectures (along with the pistol match). Participants may attend as many training blocks as time permits and all events are included in the entry fee.