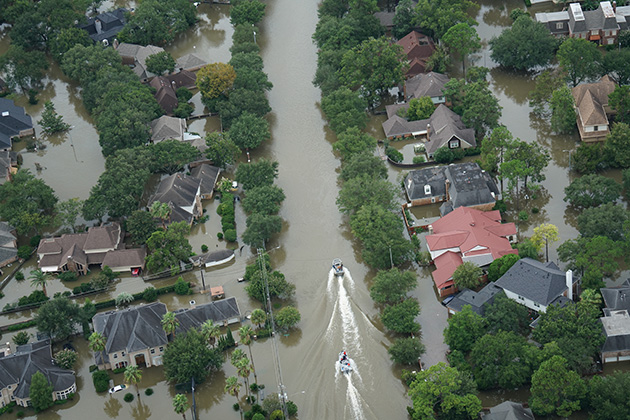 Recent weeks have shown the world exemplary efforts to save lives in Texas, both by the police and residents. The Houston metro area, which covers about 10,000 square miles, is crisscrossed by miles of water bodies like creeks, channels and bayous that drain into the Gulf of Mexico. These contributed to the devastation, leading to an epic scale of flooding.

As the storm raged and the world watched South Texas submerge, the police in the affected areas prepared for the worst. They braced themselves for thousands of rescue calls and were apprehensive about the death tolls amid Harvey flooding. As the flood waters receded, the grim reality that faced them was devastating.

The police force and the Coast Guard were deployed to rescue flood victims from inundated Houston neighborhoods. They were joined by volunteers who aided in mass evacuations from areas that were in further danger and had mandatory evacuations ordered. To add to this, inmates from prisons in the flooded areas needed to be moved amidst tight security that required man power, straining the already thinning resources.

Areas like Port Arthur, which went underwater, added to the region's woes. Even as Houston began to recover, these severely affected surrounding areas made the recovery difficult and slow. As the death toll rose, many remained missing, revealing the storm's awful toll.

Five days after the hurricane struck, Houston was sitting under 24 trillion gallons of water.

With thousands stranded and living in shelters, officers were in a bind between helping people and fighting crime. Many disaster relief agencies from across the country were ready to help Harvey victims, but they couldn't get in. It was left to the severely restricted law enforcement agencies and emergency personnel to dive in and help along with their intrepid fellow Texans.

Looting and robberies, always a risk during disasters, were soon reported in many areas of the city. The authorities had no choice but to issue a midnight to 5 a.m. curfew until further notice, in the hope that this could stem and prevent further property crimes of evacuated homes. Only first responders and emergency personnel, relief volunteers and people going to and from work were exempt from the curfew.

A week later the situation was still grim, but they were getting more help from outside forces and relief agencies. Dallas opened a mega-shelter, the Florida Air Force Reserve Para-rescue team along with the members of the National Guard and State Guard all swooped in to help, while the Pentagon worked resources that will make a recovery swift and strong.

The U.S. Coast Guard received hundreds of requests for urban search and rescue and deployed helicopters for emergency calls. They advised stranded citizens to get to the roofs of their homes and wave sheets or towels to make it easy to find them. Authorities urged them not to crawl into attics but get on top of them.

Along with the Coast Guard, the Houston Police Department worked relentlessly to save as many lives as they could. Among the casualties of Harvey was Sergeant Steve Perez, who was a 34-year veteran of the Houston PD.

Local officers and sheriff's deputies partnered with thousands of National Guard and Coast Guard troops to venture out in boats and helicopters. Even with most of them lacking flood training and working with limited resources their efforts have been held as exemplary. They had the whole nation rallying behind them with rescue efforts along with Louisiana's famous "Cajun Navy."

With some areas still underwater, it's clear that the road to recovery will be a long one. Texas Gov. Greg Abbott recently said that it will take years for the state to rebuild.

In the meantime, law enforcement officials continue to search for missing people and do their best to maintain order among the chaos.