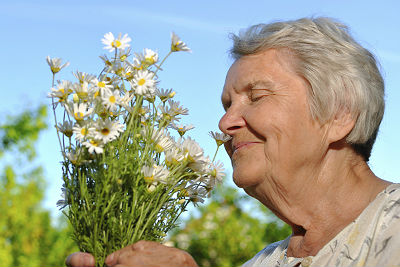 Researchers have recognized that reductions in the ability to detect odors is an early sign of neurodegenerative disease. Several studies supporting the use of olfactory system reductions as a means to diagnose Alzheimer's disease in the early stages were presented at this year's Alzheimer's Association International Conference (AAIC) held last week in Copenhagen, Denmark. The AAIC brings together top researchers in the field of dementia in order to engage a multidisciplinary international exchange of ideas.

"In the face of the growing worldwide Alzheimer's disease epidemic, there is a pressing need for simple, less invasive diagnostic tests that will identify the risk of Alzheimer's much earlier in the disease process," said Heather Snyder, Ph.D., the Alzheimer's Association's director of medical and scientific operations, describing the urgent need for early biomarkers of Alzheimer’s disease.

Qing X. Yang, Ph.D., the director of Penn State's Center for Emerging Neurotechnology and Imaging Research, and colleagues studied patients with Alzheimer's disease and MCI (the precursor to Alzheimer’s disease). The researchers used standardized tests of smell, magnetic resonance imaging (MRI) and tests of cognition. The group concluded that using the combination of smell tests and targeted MRI provided early diagnosis of impairments that would lead to Alzheimer's disease.

A team led by Matthew Growdon, M.D., of Harvard Medical School also found that functional tests of smell correlated to MRI findings in those with dementia leading to Alzheimer’s disease. The findings of olfactory deficits in dementia were also identified when the administration of testing is performed in Spanish, as reported by Davangere Devanand, M.D., from Columbia University.

Dr. Martin Vyhnalek and his group from the department of neurology at Motol University Hospital in the Czech Republic, looked at olfaction in a large group. They studied participants who did not have a diagnosis of either Alzheimer's disease or MCI, but only had subjective complaints of memory problems and compared these participants to those having some sort of clinical diagnosis. The researchers found that while those with a medical diagnosis had olfactory dysfunction, those with only subjective reports of memory problems did not have olfactory deficits.

Caroline Van Cauwenberghe, Ph.D., associated with the Neurodegenerative Brain Diseases Group, VIB and Institute Born-Bunge at the University of Antwerp in Belgium, and her colleagues looked at genetic risk factors related to olfaction and dementia. They investigated the copy number variation of an olfactory receptor gene cluster and its association with age at onset of Alzheimer's disease. They found indications that a low olfactory copy number resulted in an earlier age onset of Alzheimer's disease.

Using simple smell tests that evaluate losses in the olfactory system is promising.

"More research is needed in the very promising area of Alzheimer's biomarkers, because early detection is essential for early intervention and prevention, when new treatments become available," said Heather Snyder, Ph.D., of the findings reported at AAIC.