Know your priorities when choosing a semi‑automatic shotgun 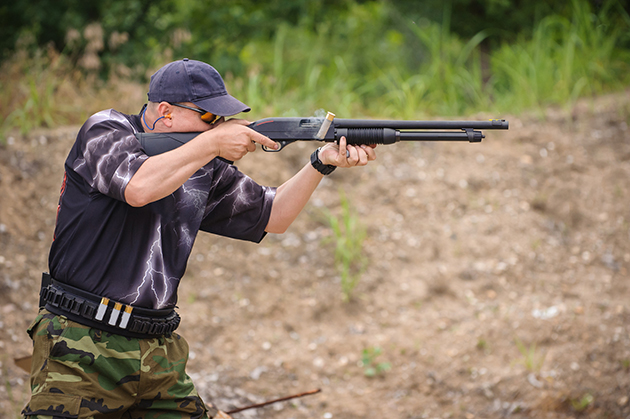 Buying a semi-automatic shotgun could be more complicated than you think. Beyond affordability, cosmetics and gauge, the biggest difference between them is the type of system used to cycle shells for your next shot — something that’s difficult to determine just by its appearance on the dealer's shelf.

Semi-automatic shotguns come in two flavors: gas-operated and inertia-driven. Your decision on which one to buy is largely affected by its use.

These types of shotguns are called semi-automatics because they automate several functions. With a break-open shotgun — such as an over-and-under or a side-by-side — you have to manually load the gun, generally after two shots. Semi-automatics got their name by mechanically ejecting a spent shell casing after each shot and self-loading a new shotgun shell.

Semi-automatics are preferred for bird hunting where you have the opportunity to shoot more than two birds in succession. Depending on the shotgun, you can actually load five shells for maximum game harvest and shoot them all without having to reload.

When it comes to clays shooting, some people prefer the semi-automatic because they are less expensive than most break-open shotguns — lowering the financial barrier to entry. Also, certain types of semi-automatic shotguns deliver less felt recoil than a break-open.

Whether it's a gas-operated or inertia-driven semi-automatic shotgun, the shell itself is the driving factor in completing the self-loading shot cycle. When a shotgun shell is ignited, it produces two byproducts: expended gases from the gun powder and recoil (or kick) from the explosion. Some semi-automatic designers believe that controlling the gases is one way to cycle the next shot into the empty chamber, while others opt to harness the energy from the recoil (inertia-driven actions).

Naturally, both shotguns have different internal components and often provide distinctive shooting experiences. That means you should really know the primary use of the shotgun before going into your purchase. 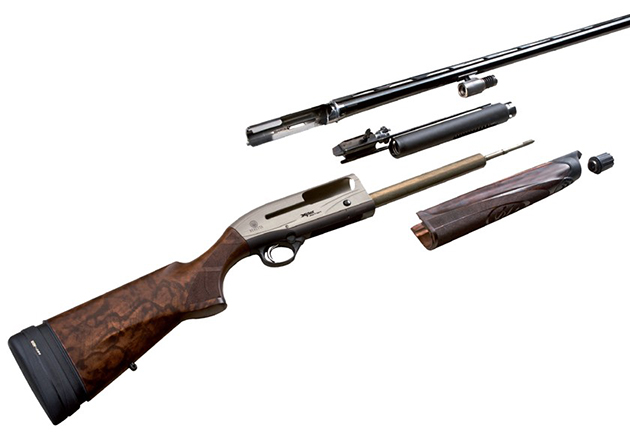 A disassembled Beretta A400 Xplor shotgun. This model is a popular gas-powered shotgun.


With a gas-powered semi-automatic, the expanding gases from the shell move up the barrel into a gas port that regulates how much pressure is exerted against a piston under the forend. This piston drives back the bolt to cycle the shotgun for the next shot.

Siphoning off the gasses to operate the gun provides a low-recoil and balanced shooting experience. In the clays sports, where a shooter can fire hundreds of shots per day, the reduced recoil contributes to more control and less fatigue than an inertia-driven shotgun or even a break-open shotgun.

An X-ray view of the gas-powered Mossberg 930 semi-automatic shotgun.


Understandably, the redistribution of the shotgun shell gases contributes to higher carbon residue in the action and consequently more frequent cleaning. And since gas-operated shotguns tend to have more moving parts than the other types of shotguns, it's easy for people to become disenchanted with their gas-operated shotgun. So while the shooting experience may be better, gas-operated shotguns require additional attention.

If you hate cleaning guns, inertia-driven is the way to go. When the shotgun shell fires, its recoil compresses the powerful inertia spring that powers the bolt carrier. The spring's compression and expansion extracts the spent shell and loads a new shell. 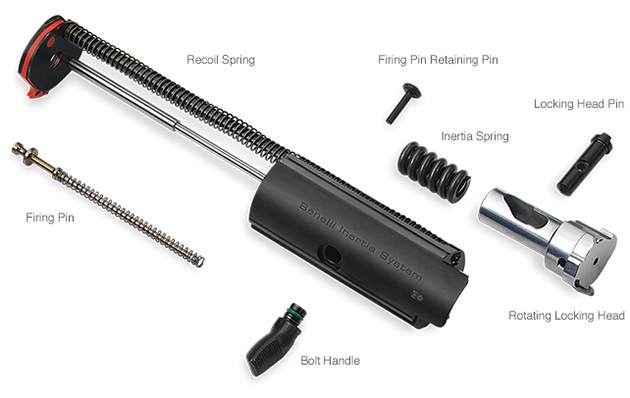 The components of an inertia-driven semi-automatic shotgun.


Without gas ports and carbon-gunked pistons that could potentially clog, the inertia-driven semi-automatic tends to stay much cleaner and therefore more reliable. The chief downside, though, is that inertia-driven shotguns can kick hard.

If you're wingshooting, the infrequent number of shots you'll take won't matter that much in terms of recoil fatigue. Plus, manufacturers are always adding new anti-recoil solutions to make the gun more comfortable. When you go for an inertia-driven shotgun, what you're really concerned about is reliability in harsh environments. 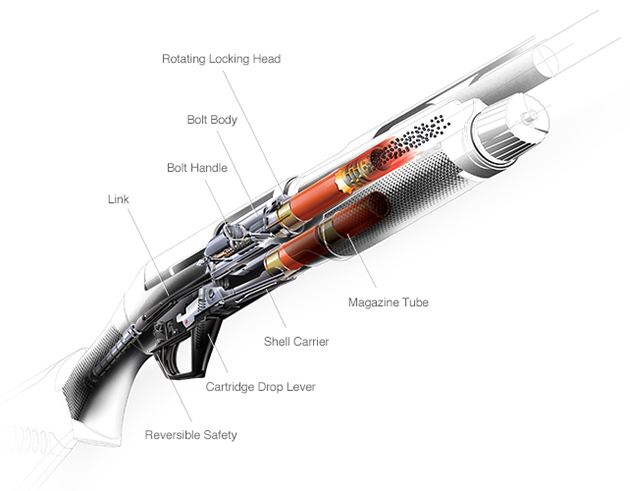 Benelli is the benchmark for inertia-driven shotguns. Here's how their operating system looks assembled.


For most everyday wing and clays shooters, gas-powered semi-automatics should fit the bill, with the caveat that you have a space to clean it. If you want a take-anywhere shotgun that will put up with lots of abuse, the harder-hitting inertia-driven shotgun is for you.