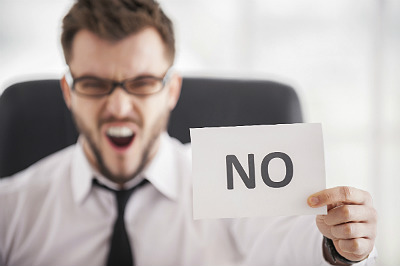 Rejection. At one point or another in our lives, we all face it.

Some of us simply deal with rejection and move on. Others take steps to learn and improve so it doesn't happen again. In the case of job candidates, however, the majority don't like to go down quietly.

20 years ago, this might not have been that big of a deal. In today's social media-driven world, however, the result can impact your brand, your reputation and even your bottom line.

How? Because job candidates who are rejected don't simply mumble their grievances. They shout them over Facebook, rehash them on Twitter and vent about them on YouTube. Their opinions and problems with your company are visible for the entire world to see, and you suffer because of it.

So, what's the solution? You can't stop job candidates from posting on social media, but you can lessen the impact of a rejection so they might not want ruin your company's image.

Follow up: Every candidate who applies for a position within your company should receive a follow-up call or email to let them know exactly what happened — even those who didn't get the job. While it may seem harsh to send out an email telling them they aren't going to be working for you, most candidates agree that ignorance isn't bliss. They'd much rather know than be left wondering.

Make the time: Most employers use the excuse "I don't have time," for not following up with job candidates after they have applied for a position. Don't be one of them. It only takes a few minutes to create a rejection letter template for your email, which you can use over and over again.

Be honest about why: Most candidates want an explanation for why they weren't good enough, and it's important you give them one. Be honest and concise about the reasons.

Be nice: Even if the candidate walks into the interview wearing wrinkled clothes, had a bad attitude and the entire interview was a disaster, that doesn't mean you should be unkind. Nastiness is never called for, and it can definitely come back to haunt you.

Think to the future: Even if a candidate isn't right for a current position, don't disqualify him completely. If you believe he would be a strong candidate for a future job, let him know you'll be keeping his application on file.

Don’t Give False Hope- That being said, if the candidate isn't qualified, and you can't see hiring him in the future, don't give him false hope. Let him know you won't be hiring him now or in the future by wishing him success on his job search.

Keeping your reputation strong depends greatly on how you act toward your job candidates. Even if you don't want to hire them, be kind and courteous enough to let them know and to tell them why.

Karen J. Rehn is no stranger to the staffing industry with more than 13 years of experience. Karen is the president and CEO of HH Staffing Services, which hit 26 years of uniting talent with job opportunity in Florida. One of the greatest rewards of working in the staffing industry is the ability to make a real difference in the lives of others, and Karen truly believes the industry has an obligation to actively contribute to enhancing our communities and improving the lives of employees.