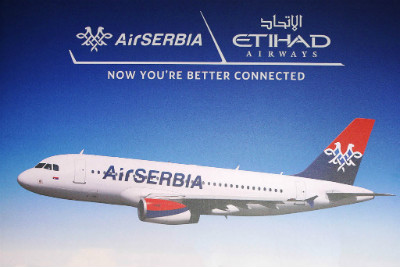 Belgrade Airport in Serbia is set to see its operations change as the country’s reimagined national carrier looks to establish its new network and fleet hub under the guidance of Etihad Airways.

Jat Airways was founded in 1927, resuming operations after World War II in 1947, and again after international sanctions were lifted in 2000 following the Yugoslav wars, when it became solely a Serbian carrier. Numerous unsuccessful attempts were made to privatize the carrier until this March when a strategic partnership was announced between the Serbian government and Abu Dhabi’s Etihad Airways.

As a result, Etihad took a 49 percent stake in the airline, with the government retaining 51 percent. Etihad will manage the airline for the first five years, tasked with improving the inefficient, loss-making carrier and turning it into a modern airline capable of serving the country’s needs and competing in a different marketplace to that of its past.

On Aug. 1, the Serbian government and Etihad announced that Jat Airways would be rebranded as Air Serbia beginning in October, with a period of transition taking place to introduce a new corporate identity, aircraft fleet and network of destinations. The airline will retain its Belgrade Nikola Tesla Airport base. It will introduce 12 new destinations from the airport, to operate alongside a mix of 33 of Jat Airways’ profitable routes.

Etihad was quick to add a daily link to Belgrade from its own Abu Dhabi base from the early days of its association with Jat. It will now operate alongside Air Serbia on the route, with new destinations including Banja Luka, Beirut, Bucharest, Budapest, Cairo, Kiev, Ljubljana, Prague, Sofia, Varna and Warsaw.

Belgrade will see two Airbus A319 aircraft based to operate Air Serbia’s schedules. These aircraft will be leased from Etihad and fly alongside five of Jat’s ATR 72s; the carrier’s aging Boeing 737-300s will be retired. In the long term, 10 new Boeing 737MAX aircraft are likely to be ordered by Air Serbia.

This news is welcome for Belgrade Airport, which is currently going through a 53 million-euro expansion that has seen reconstruction and additions to its gate and security areas, and an additional floor added to Terminal 2,. Jat Airways’ struggles over previous years have been no secret, and little growth has been seen from the national carrier at its main hub. However, with up to $200 million being made available to meet the working capital requirements and to support its restructuring, the plans Etihad have for Air Serbia will see the Belgrade hub strengthened and fit to grow.

Another benefit of the link-up between the European and Middle Eastern carriers is in bringing greater access to Eastern Europe through Belgrade by Etihad’s "equity alliance" — a collection of carriers it currently holds stakes in, including Aer Lingus, airberlin, Air Seychelles, Jet Airways and Virgin Australia. It will also benefit from a much larger range of destinations through code-sharing.

The new destinations to be served by Air Serbia will also bring about healthy competition, with four currently served by other carriers at the airport. It will remain the largest carrier at Belgrade, followed by Wizz Air, which also operates a base at the airport. Despite remaining a small carrier, it will benefit greatly from the scale Etihad can offer — something it could not have achieved on its own.

Will Air Serbia be a success under the management of Etihad?