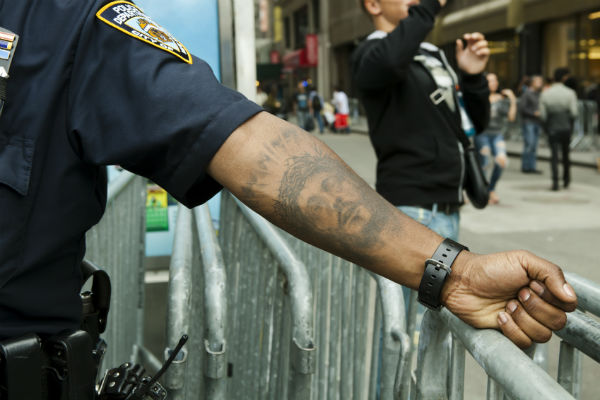 The New York City police officer is shown with a tattoo of Jesus Christ on his arm.

What was once thought of as something only criminals have, tattoos are quickly becoming mainstream with approximately 1 in 5 adults having at least one tattoo, according to a recent Harris Poll. With tattoo popularity increasing, employers are having to create more in-depth policies regarding employee tattoos.

The Chicago Police Department recently updated their tattoo policy, requiring officers to cover up their tattoos. Three officers subsequently filed a lawsuit claiming it violated their First Amendment rights. However, a judge recently tossed out the lawsuit, allowing the policy to stand.

This story caught the attention of the nation, and now other police departments are reconsidering their tattoo policies to determine if changes are needed. Are current policies eliminating highly skilled candidates? Are the policies clear enough to hold up legally?

How do tattoo policies differ across the country?

Tattoo policies in police departments vary widely — from complete tattoo bans to no restrictions at all. However, the average police department requires tattoos to be covered while on duty and restricts only offensive tattoos — with the description of offensive being clearly defined when the officer is hired.

There are departments, though, that fall somewhere in between.

In Washington County, Tennessee, deputies are allowed to display tattoos while on duty — but only those tattoos they had prior to being hired. Once they are hired, deputies are not allowed to get any new visible tattoos, according to Sheriff Ed Graybeal on WCYB-TV.

In New Hampshire, practically every police department has a ban on tattoos. However, when Manchester Police Chief Nick Willard heard about a veteran who wanted to become a police officer but couldn't because of his tattoos, he decided the department's policy needed to change.

Now, with the revised policy in place, tattooed applicants will be put through the first phase of hiring. If they make it to the second phase, the applicant's tattoos will be evaluated to determine offensiveness. If deemed inoffensive, the officer will continue the process to become an officer with only minor restrictions on the current tattoos, according to Military.com.

With all of these policies, how do agencies know which policy is best suited for their department? The hardest part is that there isn't simply one right answer. So, I decided to speak with Walter Ardin, a retired police chief from Rockaway, New Jersey, about the subject. (Full disclosure: Ardin is my uncle.)

Ardin spent 25 years with the Rockaway Township Police Department. He worked his way through ranks from patrolman, sergeant, lieutenant, captain to chief in 2008. He spent more than six years as chief of police before retiring.

Ardin believes there is no "best" policy, but there is one thing every department should do: be consistent and be clear. Have a clear set of rules and regulations that do not leave room for interpretation, and enforce all regulations with all employees — you cannot bend the rules for one officer and not another.

At his department, the tattoo policy was fairly standard: cover up all visible tattoos and no facial, neck or hand tattoos. Ardin stated that covering tattoos was not really an issue — the uniform supplied would cover most tattoos, and if an officer wanted to wear short sleeves during the summer months, they would cover with bandages or skin-colored makeup. The reason for the lack of issues: a clear and concise policy with a signed acknowledgement.

What opinions and suggestions did Ardin provide?

With tattoos becoming mainstream, it’s no wonder most people — and employers — are more accepting of those with tattoos. However, that doesn't mean you should expect employers to not have a tattoo policy in place.

Ardin believes law enforcement officers are constantly in the public spotlight and should uphold a professional image. The perception of the public eye is critical and a tattoo-covered police officer could send the wrong image.

At the same time, Ardin does not agree that tattoos should be banned entirely. "With this, you can be eliminating outstanding officers just because of tattoos," he said.

The best bet in somewhere in between. Create a clear and concise policy that restricts tattoo visibility to create a professional appearance, and then enforce the regulations across the board. If your agency chooses to ban offensive tattoos, your policy must clearly state what constitutes offensive. In addition, every hired officer should be required to sign the tattoo policy.

"When we interview candidates we make it clear to them, if they have visible tattoos, the policy on them and we also make sure they understand it," Ardin said. "If they have any concerns with it, then it is up to them if they wish to continue seeking employment with us. By accepting employment, they are agreeing to these rules and also agreeing to leave their personal feelings about a subject at the door and abide by the rules."

By following this type of procedure, agencies are clearly defining their policies and officers are agreeing to follow them. This is the best way to prevent future issues — and the best defense if your department becomes involved in an issue.

If your agency does not have a tattoo policy or if your tattoo policy needs adjustment, Ardin suggests being proactive, not reactive. Create or adjust your policy immediately.

"Do not put a policy into place as a reaction to one recruit who now comes through the door with tattoos that you want to eliminate," he said. If the policy is already in place, it will be much easier to regulate and enforce without legal repercussions.

Tattoos are still spreading in popularity, so create a policy that will retain qualified candidates but still keep your agency's appearance professional. When was the last time you reviewed your tattoo policy?