Is hearing well in one ear enough? A look at unilateral hearing loss 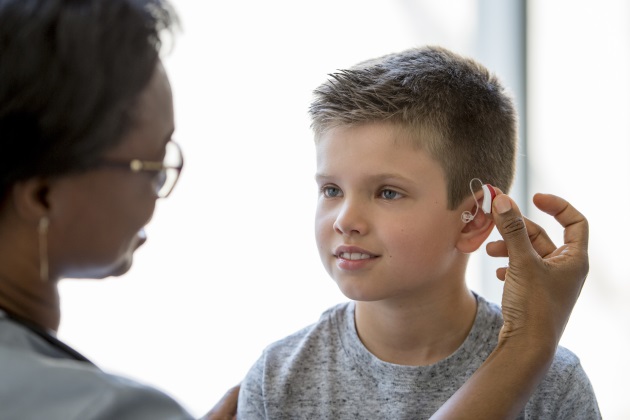 Not being able to hear so well in one ear shouldn’t significantly affect school performance nor social development for a child since the other ear functions properly. Right?

For May — National Better Speech and Hearing Month — we’ll explore some important yet frequently overlooked areas in the field of audiology.

Unilateral hearing loss impacts quality of life for many children

The mistaken belief that a hearing deficit in one ear or unilateral hearing loss (UHL) is no big deal has been shown by research to have dire consequences for children when they reach school age and adolescence.

Prevailing misinformation about mild hearing loss — the umbrella category that UHL falls under — has prevented many children who would have benefited from intervention from receiving it. In many states, for example, these children do not qualify for early intervention and other programs open to children with bilateral hearing loss.

"When communication access is denied through misinformation, minimization, neglect, stigma, or where there are financial barriers to communication access, then it is likely that children with untreated or undertreated hearing loss may eventually join the ranks of adults with untreated hearing loss, leading to lives of underperformance and broken dreams," state authors of a study based on a 2005 survey of the parents of 225 dependents who reported having hearing difficulty but didn’t use hearing aids.

In the survey, three out of four parents indicated their dependent experienced minor to serious problems affecting their quality of life. The most serious problems experienced in rank order were social skills, grades in school and language development, emotional health, followed by relationships with peers, self-esteem, and relationships with family.

For these reasons, most pediatric audiologists today are in favor of using assistive devices to reduce a child’s listening effort, according to audiologist Jennifer Phelan, AuD, CCC-A, specialist in the evaluation, diagnosis and treatment of hearing loss in children at the Center for Audiology, Speech, Language and Learning at Northwestern University.

“The child with unilateral hearing loss has to exert more effort to be able to do what peers with normal hearing can do, that effort often ends up manifesting as fatigue for that child,” she explains.

In a study of 74 pairs of case-control siblings in elementary school, the children with UHL, fewer than half of which had trialed amplification and/or assistive devices, demonstrated significantly worse oral expression and language comprehension scores compared to siblings with normal hearing. While the authors of the study note that “speech-language scores do not translate directly into school performance, the secondary outcomes of speech therapy and Individual Education Plans suggest that the children with UHL had significant problems in school.”

"These findings suggest that the common practice of withholding hearing-related accommodations from children with UHL should be reconsidered and studied, and that parents, pediatricians, and educators be informed about the deleterious effects of UHL on oral language skills," they concluded.

Amplification proves beneficial for many with UHL

While it is true that a child with unilateral hearing loss has the ability to hear, hearing in a noisy environment or at a distance can be particularly challenging.

Infants or toddlers often miss the incidental speech surrounding them in their daily life, which is so vital to their learning and social development, writes Audiologist Karen Anderson, Ph.D., on Supporting success for Children with Hearing Loss, a website with extensive resources for teachers.

“Because most rules of social interaction are learned via subtle auditory and visual cues, rather than direct teaching, it isn’t a surprise that about a fifth of these children will develop behavior or social issues,” emphasizes Anderson. To prevent some or all of the possible language delays, behavior and social issues, she highly recommends balancing out hearing in infancy by fitting the worse ear with a hearing aid.

Not all children with UHL will have difficulty, explains Phelan, but research has shown that there will be a definite subset that struggles. Since there’s no way to know how a child will be affected, it makes sense to explore amplification with each child to see if it works.

She shares one case where parents chose not to pursue treatment for their daughter with UHL. The girl seemed to be doing well in school but came home tired at the end of day and needed down time before doing homework. It wasn’t until she was in second grade and began to struggle on spelling tests that the family reconsidered and brought her to Phelan for a unilateral fitting.

"The 7-year-old girl loved the hearing aid from the start!" shares Phelan.

Her listening effort was reduced and it was much easier to perform on spelling tests because she could easily hear what word was being said. Her family reported she no longer needed down time after school because she wasn’t fatigued at the end of the day.

"A lot of time the UHL cases aren’t the ones where the difficulty is very obvious — it can definitely be more subtle," says Phelan. "When it comes to kids, they don’t know that they don’t know — that they have to put in a lot more effort than other kids sitting in the room with them. So once they get the assistance it becomes very evident to them that wearing a hearing aid gives them a lot of benefit."

How teachers can support students with unilateral hearing loss