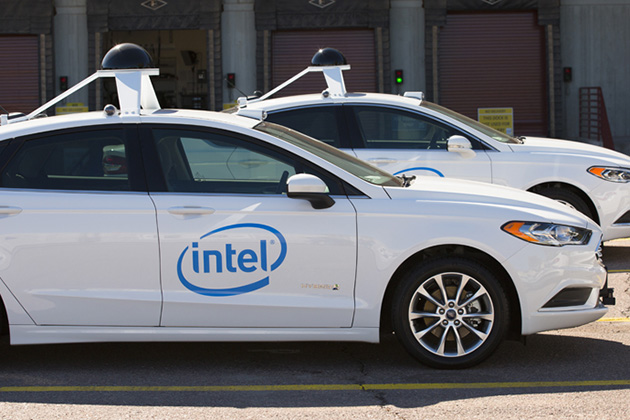 The line between the automotive and tech industries is perpetually being blurred. In fact, CES — the tech world's giant annual electronics show in Las Vegas that takes place every January — featured so much auto technology this year that observers joked that the letters no longer stood for "Consumer Electronics Show," but rather "Car Electronics Show."

As self-driving cars move from fantasy to development to, eventually, commonplace on the roads, the connection between vehicles and the tech world will become even more inextricable.

And while every major automaker would love to be the marque that puts the first autonomous car on the market, the computing technology — not the engine and transmission coming off an assembly line — still must advance in the coming years before a car self-drives itself off the lot for you.

On the heels of a recent multibillion-dollar acquisition, a familiar name in computing may soon be responsible for coming advances in autonomous vehicle technology — and could ignite a great deal of competition among the players already in the auto tech world.

On March 13, Intel purchased Israeli firm Mobileye for $15 billion, jumping into the automotive sector in a massive way. Intel is the dominant company for CPUs in desktops and laptops, dwarfing nearest competitor AMD's market share, but it had not made a big splash in self-driving car technology until now.

As Vox tech writer Timothy B. Lee writes, the Mobileye purchase makes a lot of sense for Intel, due to an analogous business model of providing automakers and PC-makers, respectively, important component parts.

"Customers who buy cars with Mobileye chips and sensors inside may not even know they're using Mobileye technology. They'll just know they bought a car from Ford or Volvo or whoever. Which is exactly how the carmakers like it," Lee speculates.

The timing of the acquisition speaks of this being a necessary one for a huge tech player like Intel. Goldman Sachs estimates that the self-driving car market will be worth $96 billion in 2025 and $290 billion in 2035, up from just $3 billion in 2015.

Furthermore, while Intel had invested in some self-driving startups, according to CNBC, its competitors have been in the autonomous vehicle world in a much more substantive way.

Nvidia, albeit more known for graphics cards as opposed to Intel's CPUs, is thought to be the current leader in self-driving computing. Its development in the self-driving car world has been partly responsible for its soaring stock price during the last two years, and its clients include Honda, Volvo, Mercedes-Benz and Tesla.

And just days after Intel announced its Mobileye purchase, Nvidia and Bosch unveiled a new artificial intelligence computer for self-driving cars with the necessary computing strength for "Level 4" autonomous driving, whereby a car can fully drive on its own with a human present in case of necessary intervention. To put that in context, Level 5 driving, the top level on the Society of Automotive Engineers' scale, is completely autonomous with no need for any human input at any time.

AMD — the perpetual Intel rival for PC microprocessors — has also made efforts in the past several months to have its newest technology featured in futuristic uses like AI, machine learning and autonomous driving. ARM, a company best known for having its chips in smartphones, also recently announced a new chip aimed in part at self-driving technology.

In addition to the ground it may have already lost to competitors, the Mobileye acquisition comes as a risk for Intel, as it paid a 34.5 percent premium for Mobileye based on the Israeli company's stock price on March 13. Intel opening up the checkbook also comes at a time when AMD's new Ryzen CPU chip is getting tons of good press, possibly threatening Intel's stranglehold on its signature processors.

At this point in automotive history, computing technology is arguably as crucial to new cars as the four wheels touching the pavement. In the future, far less human input will be required in those new cars. How quickly we arrive at that future is as much the responsibility of computing firms as it is that of traditional automakers.

Ross Lancaster is the former publication manager for MultiBriefs. He has more than 15 years of experience in media, content marketing, writing and publishing, and holds a master's degree in political science from the University of North Texas. You can reach him at rossclancaster@gmail.com.