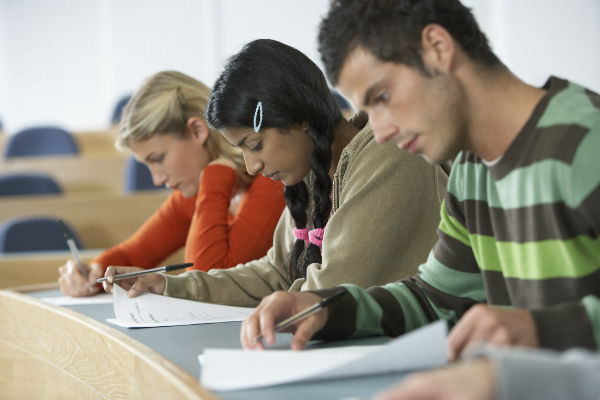 Some books come with premade tests or the ESL department may provide tests, but most teachers will have to develop their own tests during a given course. Traditionally, tests have been linguistics-based in nature, in that specific items are tested rather than semantics where the focus is on functional language use.

Discrete-point tests have a purpose, but they are not the best way of testing language competence. Good students can guess many items without really understanding, and such tests do not prepare the learners for English usage outside the classroom. In addition, mastering "irregular verbs" on a test does not imply communicative competence.

One traveling to a foreign country will not be required to fill in answers on a handout. Reading the daily news, understanding a train schedule, asking for and receiving directions and listening to the news on the radio or television are the tasks most likely to be faced by the learners "in the field."

A better way to test is to design an activity that integrates the various language skills in a realistic fashion. An integrative test draws on a variety of sources. Syntax, vocabulary, "schema," cultural awareness, reading skills, pronunciation and grammar are all factors the test maker and test taker need to keep in mind. The integrative test is generally considered to be a more reliable instrument for measuring language competence.

Testing has shifted to a more learner-friendly approach "based on authentic uses of language, including portfolios, diaries, ethnographic projects, and documented interaction in language communities," according to Sally Sieloff Magnan, Dianna Murphy and Narek Sahakyan.

Perhaps the most basic integrative test is the simple dictation. Students access their abilities in writing (including punctuation and capitalization), understanding oral production and grammar when they write the model sentences. The multiple-choice questions at the end repeat the sentences in a different order at normal speed one time, and the test takers match the meaning.

In a dictation, the learners have to reconstruct what they hear according to their internalized abilities in all skill areas. Some teachers may object, saying the word order, structures and vocabulary are all provided by the test giver during the test. However, a study of student errors shows this is not true.

On an English dictation, for example, learners tend to leave off verb inflections — "He run" for "He runs," "They play" for "They played" — or mistake singular for plural.

The sample dictation is still somewhat limited since the sentences do not form a unified context. A good variation would be for the instructor to tie the sentences around a common theme or to take a paragraph from a text and divide it into sentences.

An even better test is a "dicto-comp" where learners listen to a passage, then write it out in their own words. Usually the passage is from something they have just read or discussed. A combination exercise where students follow along in the text while it is being read is also a possibility.

The following passage is a "reading reconstruction" by Linda Markstein and Louise Hirasawa, in which students read and reread a passage during a set time. As a "dicto-comp," it should be read at least twice and possibly three times depending upon the level of difficulty and the ability of the students.

Read this paragraph as many times as you can in three minutes. Then, with your book closed, restate the ideas in writing as clearly and completely as you can.

Cameroon in However, Cameroon has managed to avoid problems with these ethnic and religious groups. This is partly due to its powerful president who has led the nation with authority for many years. In the past 10 years, Cameroon has also developed a strong economy. Rubber, coffee, bananas and cotton are among the major products that give economic security to the country.

By giving the key words, the test maker enables the learners to concentrate on rewriting the passage without having to stop to figure out the spelling and placement of accents on the vocabulary items. This task is also more authentic than a straight dictation since students studying in regular classrooms will listen to lectures in English, then coherently rewrite the material first in the form of notes and later in the form of a written test on the lectures and readings.

This is a "global" test that checks competence as well as performance, since a test taker can become quite skilled at discrete-point examinations but be unable to communicate in a real speaking or writing situation. As a pure reading test, the same procedure can be followed without the instructor's reading the passage.

The best reading skills test has the students work through an unseen passage by a familiar author or on a familiar subject. It can be followed by reading skill exercises that stress communication and analysis in keeping with the ACTFL Standards:

Standard 1.2: Students understand and interpret written and spoken language on a variety of topics.

Standard 1.3: Students present information, concepts, and ideas to an audience of listeners or readers on a variety of topics. (National Standards, 1996).