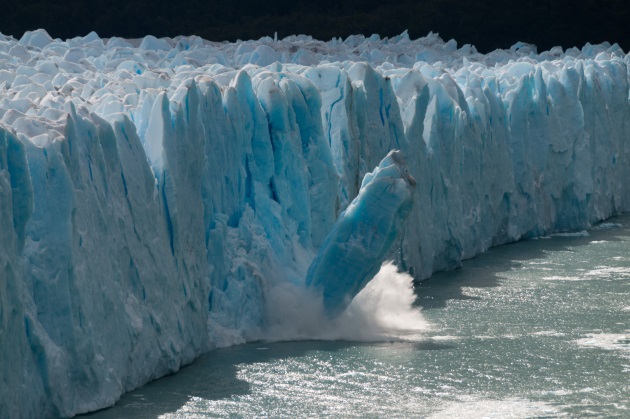 Statistics from NASA’s Goddard Institute for Space Studies, affiliated with Columbia University, make speculation about rising global temperatures quite real. The past five years are the hottest on instrumental record, compared all the way back with the late 19th and early 20th centuries.

But there’s a push-and-pull dynamic as a 1.2 degrees Celsius temperature rise can fall as water cools from melting ice. This dynamic implies “an increasing heat flux into the ocean” that melts ice again, in a feedback loop where climate effects exacerbate more climate effects.

The upshot of this temperature data suggests no rest for the weary in a time of increasing climate challenges trivialized by President Trump’s comments at Davos, Switzerland’s World Economic Forum. Amidst a forum panicked to be relevant to the climate crisis, Trump gave us more empty rhetoric.

He also offered tree planting: “He announced that the United States would join an initiative to plant a trillion trees that was introduced at the event, but he also declared that ‘we must reject the perennial prophets of doom’ and that it was ‘not a time for pessimism.’”

The climate science community can scarcely afford optimism’s luxuries, but sometimes it shines through anyway. New research that links melting ice to human actions from 1955 to 2005 is supposedly not all bad news.

Arctic temperatures rise at double the average rate in a phenomenon referred to as “Arctic amplification.” A new study in Nature Climate Change expands our understanding of what’s causing this amplification. Human produced chlorofluorocarbons (CFCs) have been linked to Antarctic ozone depletion, and now the same gasses are linked to half of Arctic ozone depletion, which melts sea ice.

It may seem obvious that Arctic sea ice melts under Antarctica-style conditions, but models had to be created to confirm this speculation. In the ‘80s, there was an international CFC curbing initiative, and one interpretation of Arctic ozone data suggests eventual relief. Mid-20th century CFCs will “leave the atmosphere,” providing what University of Washington climate scientist Cecilia Bitz describes as “a little shred of optimism.”

Shreds of optimism are hard to come by given multicontinental fires ambushing the earth’s surface, creating toxic fumes and related deaths and illnesses. Even the Arctic has fires.

Human-induced atmospheric emissions upset the weather. Drought, coupled with high winds and rising temperatures, cause fires. Recent Australian bushfires that burned 46 million acres and caused up to $2.4 billion in damages are subsiding a bit due to rainfall.

But the fires are emitting half of Australia’s typical yearly amount of carbon: 250 million tons. There’s scarcely an optimistic shred to be had here.

Carbon-inducing wildfires of the new “Australian magnitude” are the best example of climate change’s complex compounding negative effects. Air and water quality, flora and fauna livelihoods, food systems, and human communities face overwhelming circumstances. Optimism may be on short supply, but what if they had said that in the ‘80s, when CFC reductions began?

Trees embody the double edged sword of both capture and release: “Trees and other plants are normally a valuable source of carbon storage — they suck carbon out of the air and store it in their trunks, branches, roots, and even the soil. But when they burn, they release all that carbon into the atmosphere. That carbon warms the planet further, creating a disastrous feedback loop of more heating and risk of fires.”

Disastrous feedback loops are omnipresent today. The volatile environment adds tree planting to the list of potential climate hazards. Preference for Davos dosages of blind optimism over doomsday prophecies asks too much of many. Remembering hindsight’s function may be just what the doctor ordered (at least for increasingly fragile collective mental health accompanying climate omnicrisis).

Hindsight, like that employed in today’s assessment of yesterday’s CFC reductions, is how tomorrow will judge most of today’s climate crisis intervention efforts — like seawall building, bike riding… or tree planting. Sure, it’s not enough, but the totality of gestures might mean something one day.

Either saplings will burn alongside mature trees in increasingly destructive infernos, or a combination of location, timing, and plain old good fortune will allow new forests to sequester carbon. How’s that for “foolish fortune” telling, President Trump?

Retrospective affirmation of today’s seemingly trivial human actions can only occur if the actions happen, regardless of their rhetorical justifications or hesitations.