In a US first, Chicago charter school workers strike 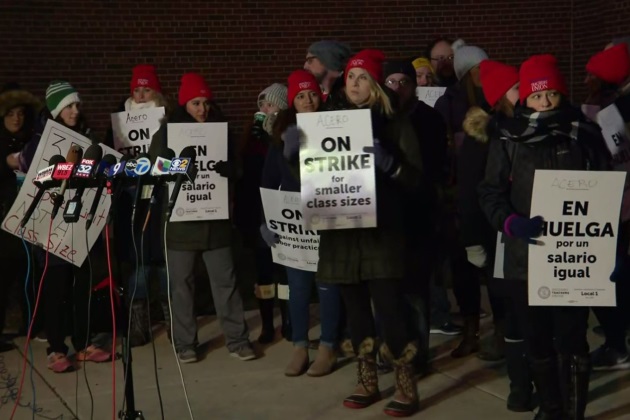 Public education reform in the past few decades has included a massive shift of funding and resources toward the charter school model. This model allows publicly funded schools to be managed by nonprofits or for-profit companies.

Charter schools do not have to honor employee collective bargaining rights, making it difficult to organize charter teachers’ unions.

500 striking educators and staff, serving 8,000 students in 15 schools, are on the picket line in the first charter school employee strike in the U.S. Acero’s educators and staff, who made the decision to unionize in 2013, recently merged with the CTU under American Federation of Teachers (AFT) leadership.

What are the union’s grievances against charter schools? Nationwide, charter school attendance has tripled since President George W. Bush signed the No Child Left Behind Act in 2001. Charters became more common in cities where we see massive and rapid-fire school closures — including Chicago.

Many charge the city with deliberate social engineering tactics, as schools in low-income, non-white neighborhoods were targeted for closure and replaced by lesser-performing charters worlds away from more affluent majority white charter schools.

They want smaller classroom sizes than the official 32 students per room, more curriculum and grading autonomy for teachers, and they want their schools to have sanctuary status for their Latino student population. Acero educators carry a 20 percent greater workload than their public school colleagues; class size reduction and enhanced staff support could reduce this load considerably.

Per the union, Acero spent $1 million “less in staff salary costs for program services” in 2018 than the year before. As of June 2018 the company had “$24 million of unrestricted cash in its accounts, plus a separate reserve of $4 million in cash as part of its requirements to its bondholders.”

There is proof that Acero has money, they just aren’t spending it on schools.

Many Acero educators are women, with the strike also representing gender-based pay issues in a traditionally feminized field of labor: K-12 teaching. 86 percent of special education teachers in the U.S. are women.

This strike follows a wave of teacher strikes across the country in Kentucky, West Virginia, Arizona, and Oklahoma.

What makes it unique is two-fold. The first charter teachers’ strike is a symbolic challenge to those who relied on chartering to eliminate teacher unions, leading to the high employee turnover rate that undermines educational environments. The second unique quality is that since these Acero educators are facing lower pay and, in many cases, more challenging daily work conditions, a victory improves the union negotiating climate in Chicago and across the country.

What’s not so unique is that this historic strike is in Chicago, well-known for its rich labor history. The CTU has its own long and complicated history, but that’s just it: it’s long.

For people aware of this history, it makes sense the next big teachers’ union challenge — charters — is launched in Chicago. Charter school advocates claim that chartering relieves teachers and administrators from cumbersome state regulations that thwart creativity and flexibility — ultimately hurting students.

They have friends in high places, including pro-charter Chicago Mayor Rahm Emanuel who served as White House Chief of Staff for President Obama for two years. From 2001-2009, the CPS CEO was Arne Duncan, a corporate education enthusiast who served as Secretary of Education under Barack Obama from 2009-2015.

This bipartisan support for chartering and other education reform policies has complicated the political terrain for teachers’ unions. Striking charter teachers further complicate this terrain, revealing the overlap between education policies and union busting tactics amidst weak national union leadership.

The charter school chapter in U.S. labor history is just beginning. Chicago maintains its status as a major site of resistance against the great corporate education experiment, which has support from Emanuel’s office and the highest office in the land in the White House. Stay tuned.