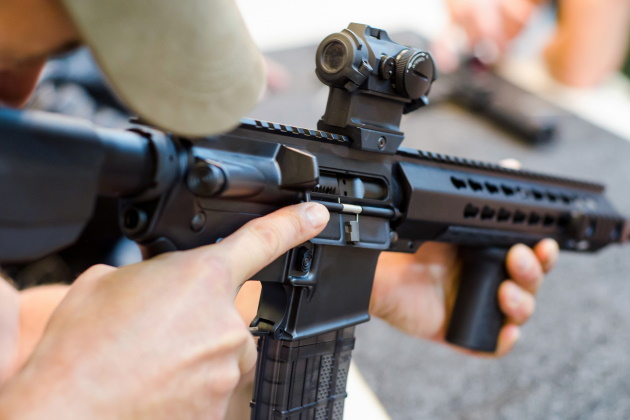 Modern sporting rifles are very likely among both the most commonly used and most misunderstood firearms in the United States.

While some hunters and shooters simply prefer more traditional wood stocks and/or a bolt, pump, or lever-action design (and there’s nothing wrong with that), semi-automatic rifles are gradually becoming more popular with many other gun owners. This includes an increasing number of hunters for several reasons.

For one thing, many of the most popular modern sporting rifles have a modular design that’s easy to customize to the exact specifications of the user. Swapping out the stock, optics, or even the entire upper receiver for a completely new cartridge is a relatively simple matter in many cases.

Next, semi-automatic rifles facilitate faster follow up shots. This is obviously a big advantage in case of a miss with the initial shot. This also makes it easier to shoot multiple targets in rapid succession during a competition or take additional animals out of a group (not an uncommon occurrence when hunting coyotes or feral hogs).

Additionally, hunters and shooters with law enforcement or military backgrounds tend to gravitate towards AR-15 style rifles in particular for the simple reason that they are intimately familiar with the design. Having spent countless hours with those rifles during their military and/or law enforcement career, these people tend to be very comfortable operating, cleaning, and otherwise maintaining those rifles.

Finally, as gun manufacturers have refined their designs and added additional cartridges to the list of those available in modern sporting rifles, those rifles are increasingly accurate, reliable, and effective for a wide variety of tasks ranging from punching paper or banging steel at the range to hunting varmints and big game.

Though Colt owns the trademark for “AR-15,” the patent for the design has long since expired. For that reason, many other companies manufacture AR-15 style rifles similar in appearance and overall design to the original ArmaLite AR-15 rifle designed in the 1950s.

Note that “AR” stands for “ArmaLite Rifle,” not assault rifle. Additionally, while modern AR-15 style rifles currently sold for civilian use look similar to and share the same basic principles of operation as the M-16 and M-4 rifles used by the military, they are not capable of automatic fire. For that reason, it is inaccurate to describe AR-15 style rifles as machine guns or “assault rifles.”

The AR-15 was first designed to use the high velocity .223 Remington cartridge and the M-16/M-4 rifles used by the military are chambered in the very similar (but not exactly the same) 5.56x45mm NATO cartridge. Those two cartridges are still by far the most popular in AR-15 style rifles, but they are far from the only ones available.

Indeed, while it has a fine reputation as a varmint round, many people have had doubts about the effectiveness of the .223 on big game for almost as long as the cartridge has existed. Though hunting deer and other big game with the .223 Remington is still a somewhat controversial subject, better ammo has undoubtedly made the cartridge much more effective on big game that it was 20-30 years ago.

Even so, the .223/5.56 is not legal to use for deer hunting in many areas. So, with all that in mind, a number of different rifle cartridges have been developed over the years that improve upon the various shortcomings of the .223/5.56, but still fit and reliably function in an AR-15 style rifle.

The original AR-10 design in the 1950s used the .308 Winchester cartridge. That remains the most popular cartridge available in AR-10 style rifles, but the newer 6.5 Creedmoor is becoming increasingly popular among both hunters and competitive shooters nowadays.

Various models are currently available in a number of different cartridges as well. For instance, this includes cartridges like the .243 Winchester, .260 Remington, 7mm-08 Remington, and .338 Federal. All of those cartridges are proven performers in big game, which makes them especially popular among hunters.

While AR style rifles are the most commonly used modern sporting rifles in the United States, there are countless other options out there as well. Among others, this includes piston rifles similar in appearance to the AR-15, like the H&K 416 or Sig MCX, Ruger’s Mini-14 and Mini 30, various AK clones, and many others. Once again, these rifles are typically chambered in a variety of different cartridges, but the ubiquitous .223 Remington, 7.62x39mm, and .308 Winchester cartridges are all especially common.

Bottom line: shooters and hunters interested in using a modern sporting rifle these days have countless options for both rifles and ammunition. They certainly have their limitations and they’re not for everybody, but there is very little that can’t be done with a high-quality modern sporting rifle in the right hands.