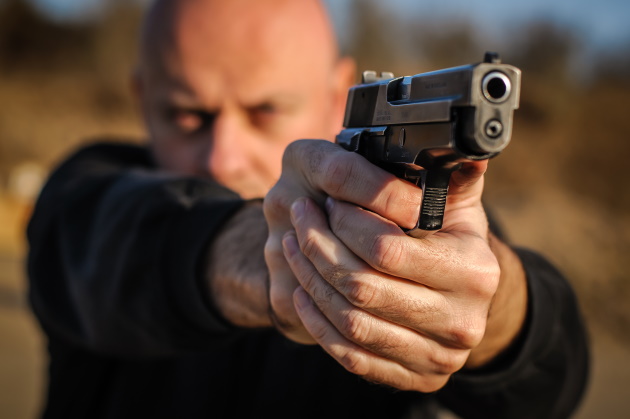 Most training today is what is known as “training to a standard.”

It may be passing a test, shooting a certain size and speed group, or checking a box on the amount of time and reps done.

The problem is, that type of training doesn’t carry over to the real world.

Going to the range, standing flat-footed, and staying in your lane just doesn’t cut it.

It may be fun. It may be therapeutic. But it only builds a fraction of the skills we need for real-world, lifesaving shooting situations.

The real world throws us curve balls that chip away at the skill we’re trying to perform.

Each one of these cause people to fumble their draw and for groups to open up. Eight-inch “combat-accurate” groups turn into complete misses and additional rounds fired are necessary to make effective hits.

As I like to say, the bigger the difference between how you train and reality, the tighter your groups need to be.

Under sterile conditions, standing flat-footed shooting paper, you SHOULD be able to shoot a five-round 1” group at 6-10 feet (even though only roughly 10% of shooters who carry regularly can).

It’s a basic test of whether or not you can line up the muzzle and press the trigger without disturbing muzzle alignment and it can be done with any gun, any ammo, and any sights that aren’t loose.

Even if the sights are off, you should still shoot a tight group…it just might be offset from the bullseye.

Ironically, as I sit here writing this, a comment came in from someone saying, “Anyone should be able to shoot one-hole groups at 11 feet.”

Everyone SHOULD be able to…but most shooters move on from the fundamentals before they really have them hardwired into their brain and their performance is negatively impacted until they go back and rebuild their foundation.

So, one way that you can perform better in real-world situations is to “overtrain” the basics…

Go beyond being able to do them…to the point that it is impossible to fail.

Not by grinding out hundreds of mindless reps, but by doing a few perfect reps, a few times a week over an extended period of time — the same way you learn any other skill.

The other way to approach it is to gradually add variety and complexity to the base skill of lining up the muzzle and pressing the trigger.

It’s not an either/or…you want to do both.

Be precise to build the base skill, and then do what you can to make that base skill as resilient as possible.

So that it survives the chaos of a real-world situation.

There’s a little 99-cent app that you can use to have some fun with this.

I’ll tell you in advance…it SEEMS silly and isn’t “Tacticool” at all, so don’t go trying it in front of any bearded operator badasses.

But what it’s going to do is get you comfortable shooting from some very awkward positions.

What you need is a “Twister” board (or some red, blue, yellow, and green pieces of paper or post-its) and a friend to run the spinner OR the “Twister Game Spinner” app. Ideally, you’d also have one of our cloth Tough Multi Targets. 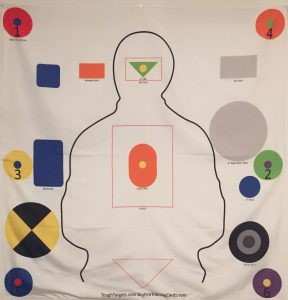 Make sure you’re somewhere where you can fall or roll safely if you lose your balance. Keep in mind that you are responsible for your actions. Don’t do this if you have any preexisting medical or balance concerns without approval from your healthcare professional.

Using an inert training pistol or real pistol that you’ve made temporarily inert with dry fire cord, another barrel block, or a training barrel, start with the pistol holstered or in your hand at low ready. Don’t do this with a real firearm that’s currently capable of firing live rounds…ever.

Either set out your Twister play surface or put two (preferably three or more) red, yellow, green, and blue Post-Its or colored sheets/pieces of paper on the ground inside of a 2.5- to 3-foot diameter area. If you’ve got tile flooring, you can use a 3 by 3 or 2 by 2 (for big tiles) area.

If you’ve got them, put red, yellow, blue, and green Post-Its on your walls as targets (or use your Tough Target).

Pick a colored post-it on the wall to start with as your initial target.

Then, start spinning (or start the app). If you use the app, set the delay to 10 seconds to start with and start working your way down to quicker and quicker times.

When the spinner calls out a foot move, move your foot to the appropriate color and do a dry fire rep while aiming at the correct colored target(s).

Start with a single target, and eventually move on to multiple targets at different angles.

1. Muzzle safety. Move at a speed that allows you to keep the muzzle pointed where you want it pointed at all times. Nos. 1 and 2 have to be paramount…above all else.

3. Trigger press quality. MAKE YOUR HITS! Can you press the trigger without disturbing the sights with a bad stance and at odd angles? If not, slow down, reset your stance slightly, and reduce your range of motion until you find your performance envelope. It doesn’t do any good to practice shooting poorly. If you don’t have a laser, call your shots by focusing on your front sight as you press the trigger.

4. How well can you line up the sights when the target and gun are at an off angle and not straight in front of your face and body?

Why do this? Two HUGE reasons.

First of all, real life doesn’t always hand you situations where you get to have textbook stance and your hips, chest, head, and eyes all perfectly squared up to your target. If you always practice sterile and get dealt a “dirty” reality, you’re going to be scrambling. You’ll shoot slower and less accurately…probably miss more, and it will require more shots being fired to get the effective hits you need to stop the threat.

Second, you’ll learn faster. Grinding out lots of the exact same exercise may be therapeutic, but it won’t build skill that you need to survive a life and death shooting situation.

Novel, fun training…where you’re changing things up slightly every one to five reps while focusing on the fundamental base skill will create 1.8-2 MILLION additional neural connections per second.