How to shoot trap with only 3 shots 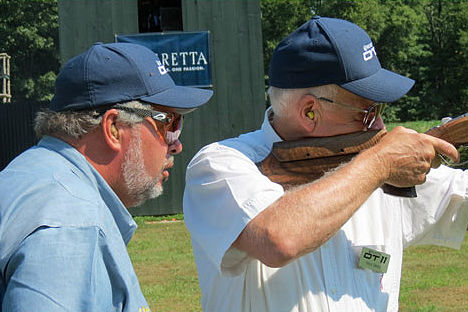 Shotgun Coach Will Fennell shows Nick Sisley the proper form for keeping your cheek firmly on the stock of a trap shotgun.

If you're interested in shooting clays with a shotgun, the game of trap is a great introduction. The targets are somewhat predictable, the squading allows individual participants to focus on the target with little distraction, and trap guns can be less expensive than shotguns used for other clays sports.

There is a little-known method for trap shooting that simplifies the entire game for new shooters. This method does not take shortcuts on the fundamentals such as foot placement, target focus and swing. However, it reduces the game of trap to only three types of shots, regardless of target presentation.

For starters, though, let's get some background on trap and touch on the basics for success.

Trapshooting has been around since the late 18th century when live birds were used. A row of cages containing pigeons was placed approximately 16 yards in front of the shooter. When the target was called for, the trapper would remotely release a bird of his choosing. At around the time of the American Civil War, live birds were replaced with glass targets, and later in the 1800s by the clay targets similar to the ones we shoot today. 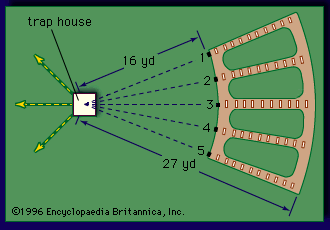 The layout of a standard trap field.

A trap field consists of five consecutive positions laid out in a row — all facing a trap house that is partially buried in front of the shooters. The positions are identified by concrete slabs on which the shooter stands. The left-most position is number 1, and the numbers continue to the right ending at position 5.

Each of the five positions has several demarcations that go back in 1-yard increments from 16 to 27 yards in a fan-like shape. The further back you go, the wider the span of the fan.

A trap squad is comprised of five shooters, each shooting 25 targets — five shots at each position. The shooters call for a single target beginning with position 1. After all five shooters have completed that round, the entire squad moves one position to the right to start another round. Regardless of his/her position in the rotation, the first shooter always begins the subsequent rounds.

The targets fly at approximately 42 mph at a distance of some 50 yards. The targets are thrown at a random angle spectrum of between 34 and 45 yards at a rising height that starts roughly 18 feet from the ground. Inside the trap house is a clays-throwing machine that oscillates so that the shooter never really knows the angle of the target to be thrown.

Trapshooting is typically shot with a 12-gauge shotgun, either break-open or semi-automatic. The break-open shotguns are in over/under or single-barrel configurations. Trap guns tend to have higher barrel ribs designed to visually acquire the game's rising targets.

These Brownings illustrate the two configurations of a trap gun. The top shotgun has a single barrel with a raised rib for standard trap, where one target at a time is thrown. You can also use the over/under shotgun for a variation of trap called doubles where two simultaneous targets are thrown. Trap doubles is not recommended for beginners because it requires demanding hand-eye coordination and a perfect swing.


In terms of body mechanics there are few basics that a trap shooter must master:

We started out by talking about a system that only requires three shots to successfully shoot trap. It's easy to learn if you can execute the fundamental body mechanics.

Too many shooters hold the muzzle of their shotgun at the level of the trap house. Avoid that mistake. Instead, before taking your position on the trap field, watch how the targets are flying. You want to hold the shotgun as close as possible to the average height where you intend to break it. Again, in terms of elevation, you want the target to essentially fly into your shotgun.

In closing, there are few rules of etiquette that must be followed:

There is a particular Zen to trap that's hard to achieve in other clays shooting sports. It's an amalgamation of the target trajectories, the squad rhythm, the individual shooter alone on the position, how the targets break, that soft focus before calling for the target — it won't take long before you feel it as well.

And please make sure to follow all safety procedures. Always wear eye and ear protection, keep your action open when the gun is unloaded, and never point the shotgun at anyone.