How to follow the footsteps of Abraham Lincoln on your travels 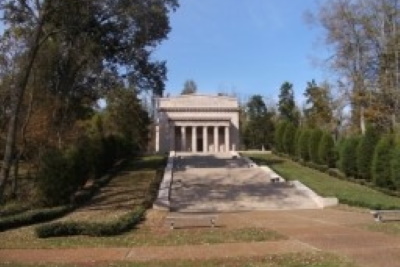 Abraham Lincoln is listed in many polls by scholars and the general public as one of the best U.S. presidents in history.

His story of being born into a poor family and working his way up to become president is inspiring. He is immortalized at many of the places he lived with museums and parks.

These sites make fascinating places to visit. You can learn more about his life and what American life was like during this time period at these places.

Abraham Lincoln was born in 1809 in a log cabin near Hodgenville, Kentucky. He grew up in what was then the frontier. Hodgenville is still a small town.

In a rather surreal yet appropriate setting in the midst of the trees is a large memorial for Lincoln at the Abraham Lincoln Birthplace National Historical Park. Walk up the 56 steps (one for each year of his life) to see the symbolic one-room birth cabin inside.

The logs and dimensions of this cabin have their own story and are not original. Ten miles away from the main park is his boyhood home at Knob Creek, Kentucky, where he lived from 2.5 to 7 years old.

After legal disputes involving property titles, Lincoln’s father brought the family to what is now Lincoln City, Indiana, where Abraham lived from age 7 to 21 years of age.

Lincoln State Park has campgrounds and several hikes, including one to a cemetery where Abraham’s older sister is buried. Visitors place a Lincoln penny on her gravestone as a remembrance. Across the street is the Lincoln Boyhood National Memorial. This side of the road includes the grave of Lincoln’s mother (who died when Abraham was 9 years old) along with plenty of split rail fences to remind visitors of Lincoln’s skill with an ax during this time period.

Make sure you visit the bronzed cabin remains. What little of what remained of Lincoln’s cabin here was shipped to Germany during the 1940s.

Bronze castings were made of the wood and some of the stones. The story is that the design of the bronze fireplace is a German design, not an American version, but it is still an interesting site.

Lincoln in his 20s

When Abraham Lincoln was 21 years old, the Lincoln family moved to Macon County, Illinois. The Lincoln Trail State Park and Memorial marks the location of their cabin.

After a year of poor luck for the entire family, Abraham Lincoln left to go to New Salem, Illinois. Lincoln’s New Salem State Historic Site is a reconstruction of the village.

While at New Salem, he took goods by flatboat to New Orleans, volunteered in the short Black Hawk War, was a general store owner, the New Salem postmaster, the county surveyor, and was elected to the Illinois General Assembly. During this time, he studied law on his own and passed the bar.

At age 29, he moved to Springfield where he started his law career. The town is extremely proud of him and preserved his home, where he lived from 1844-61 with his wife and four sons.

This was the period of time where he was elected to the House of Representatives and elected president. The Lincoln Home National Historic Site includes his home along with four blocks surrounding the home.

President Lincoln’s remains are in Oak Ridge Cemetery in a granite tomb, along with the remains of his wife and three of their sons.

A more complete story of his life can be found at the Abraham Lincoln Presidential Library and Museum. It is overseen by the state, not the federal government. The museum is listed as the No. 1 thing to do in Springfield on TripAdvisor and combines books, historical items, displays, life-size models, and even a holographic show. Lincoln is best known for freeing slaves and keeping the United States together by means of the Civil War. The battle in July 1863 at Gettysburg, Pennsylvania, had more casualties than any other during this war.

The cemetery was dedicated later that year in November. President Lincoln’s speech took only three minutes and was derided at the time; yet this is the speech that schoolchildren remember and is considered one of the most famous speeches of all time.

As president of the United States, Abraham Lincoln lived at the White House which, of course, must be seen during any trip to Washington, D.C. A less visited location is President Lincoln and Soldiers’ Home National Monument.

This was a getaway for Lincoln during the town’s hot summers. It was also used by Presidents Rutherford Hayes and Arthur Chester. The one-hour tour is highly regarded. The bed where President Lincoln died.

But the spot that means more for Lincoln buffs is Ford’s Theatre, where Lincoln was shot on April 14, 1865, along with the Petersen House across the street where he died the next day. The two buildings are run by the national park system as Ford’s Theatre National Historic Site.

While you are in Washington, D.C., the Lincoln Monument is a must-see at the National Mall. Both the size of the statue and his words inscribed in the walls are awe-inspiring. The view of the mall is also rather impressive!

Completed in 1941, Mount Rushmore National Memorial memorizes four presidents: George Washington, Thomas Jefferson, Theodore Roosevelt, and Abraham Lincoln. The artist selected these presidents to represent the most important events in the history of the United States. President Lincoln was chosen to represent the preservation of the nation.

Abraham Lincoln was important to our country. Visiting spots like these allows us to learn more about him and brings back his memory.