How Louisville’s airport is planning for the future with a new name, $100 million overhaul 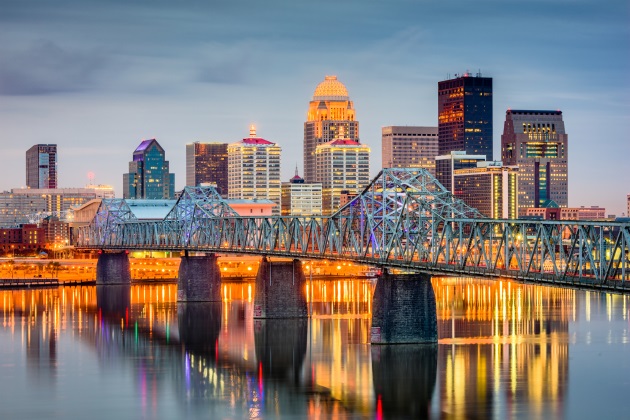 Louisville, Kentucky's airport is in the early stages of planning a major overhaul to help put improvements in place to its aging facilities and create a more favorable first impression to travelers.

The airport is currently implementing a name change following a vote in January, which has seen it become Louisville Muhammad Ali International in honor of its native son and sporting legend in the hope of increasing its global appeal.

Now, the plan is to undertake a $100 million renovation of the airport, which will greatly improve the airport’s passenger terminal, as well as other infrastructure.

The main priority is in upgrading the structure, built in 1985. This would see a recladding of the frontage and new design elements, as well as an overhaul of the interior spaces. Concept drawings show higher ceilings, plenty of light, and the use of glass to create a modern, welcoming space over the current tired structure.

Inside, there will be a complete reworking of mechanical and electrical systems, including plumbing, cooling and lighting, as well as the installation of new moving walkways and escalators, costing an estimated $55 million.

Around $20 million will be earmarked to install 24 new jet bridges for boarding aircraft, to replace the older examples in use today.

The remainder of the funding will be allocated to relocating the rental car spaces and surface parking, as well as adding another 1,000 spaces and redirecting access roads.

Dan Mann, executive director of the Louisville Regional Airport Authority, said, "More than anything, we’ve got an aging facility, and it’s needed a lot of work." He added, "We want to have that gateway to our community that has a lasting and favorable impression."

More than just a vanity project, this upgrade will come not a moment too soon with the airport experiencing a record-breaking year in 2018 in terms of passenger numbers, with a 12% increase on the previous year.

A new service to Los Angeles with American Airlines began earlier this month. At the inauguration, Kentucky Cabinet for Economic Development Secretary Terry Gill said, "This is a tremendous first step, and the major airlines are closely watching this flight’s success." The airport naturally hopes more destinations will follow.

The redevelopment proposals are still at an early stage, with concept drawings attracting a lot of attention so far, but the plans could still change. Approval must come first, before bidding on the project works is undertaken by suppliers.

If everything is finalized in 2019, work could commence in 2020 and take around three years to complete.

Funding for the project will come from the airport’s reserves, plus concessions, parking and facilities charges. There will also likely be an application to the Federal Aviation Administration’s Aviation Trust Fund.

Louisville recently received $24.4 million from the FAA to improve drainage, airfield guidance signs, taxiways, parking aprons and lighting systems. Much of this was for the benefit of Louisville’s sizeable cargo operation, which occupies much of the airport site.