How killer cells organize troops in fight against infection 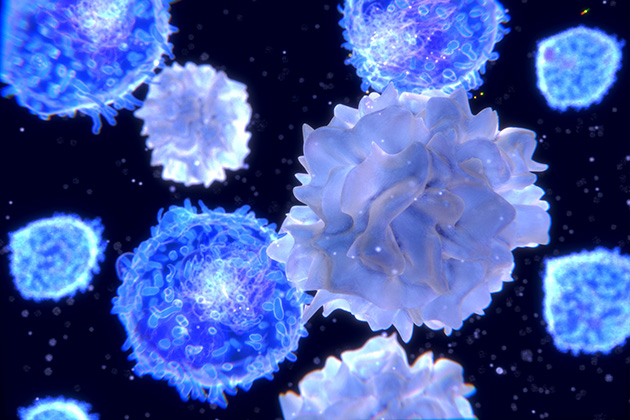 Within days of a viral infection, an army of cytotoxic T cells spreads out to track and kill infected body cells to prevent the further spread of pathogens. Cytotoxic T cells only become active and multiply upon evidence of a pathogen, somewhat like a police dog that springs into action only after it sniffs a piece of the perpetrator's property.

But a new study by an international research team explains one important mechanism behind building this army of killer cells. Researchers at the Institute of Experimental Immunology at the University of Bonn led the study, which involved researchers from the United States, Japan and Germany. The University of Bonn provided support for this study, published in the journal Immunity.

There are a number of different killer cells in the body. Each specializes in killing specific foreign substances, and activation only occurs after exposure to those particular substances.

These specialized cells begin to divide and differentiate significantly, creating troops of strong but short-lived killer cells, less powerful killer cells that live longer, and even Memory T cells and Memory B cells that activate quickly in the event of another infection from that particular pathogen.

The research team wanted to know what has to occur to help killer cells multiply effectively. Specifically, the focus of the research was to discover when, where, and how pDC spatiotemporal dynamics exert their function during viral infection.

Most killer T cells express T cell receptors (TCRs) that recognize a specific antigen. Inside cells, antigens bind to class I MHC molecules. These class I MCH molecules then bring the antigen to the surface of the cell, where the T cell can recognize them. If the T cell receptor is specific for that antigen, it will bind to the antigen and to the class I MHC molecule. The T cell then kills the cell.

The TCR needs the help of the glycoprotein CD8 to bind to the class I MHC molecule. CD8 binds to the constant portion of the class I MCH molecule to create CD8+ T cells.

The researchers found that plasmacytoid dendritic cells accumulated at the sites of CD8+ T cell antigen-driven activation. They also found that activated CD+T cells recruited XCR1 chemokine receptor-expressing DCs through secretion of the XCL1 chemokine, a type of signaling protein that attracts white blood cells to sites of infection.

Reorganization of the local dendritic cell networks through CD8+ T cell-mediation allows for the interaction of pDCs and XCR1+ DCs, which promote memory CD8+ T cell recall upon secondary infection.

The results suggest that, upon activation, CD8+ T cells recruit additional dendritic cell subsets to the site of initial antigen recognition to create their own optimal priming microenvironment. Creating a specific microenvironment first is critical for a strong, coordinated immune defense mechanism.

The information provided in this study may someday help improve the effectiveness of vaccines against viruses or tumors.