How Facebook’s new Reactions will affect your business page 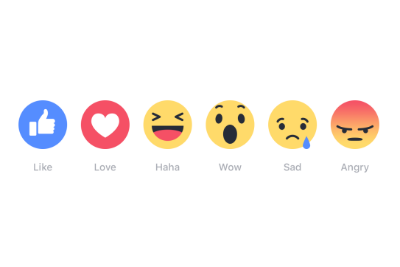 Facebook recently launched its much-anticipated Reactions worldwide. Now, when users hover over the "like" button, they can select from a much wider range of emotions. Users can choose from five new emojis: Love, Haha, Wow, Sad and Angry.

You may notice the much requested "dislike" button did not make the cut — and probably never will. In 2014, Mark Zuckerberg said, "Some people have asked for a dislike button because they want to be able to say, 'That thing isn’t good.' That's not something that we think is good. We're not going to build that."

Reactions are here! We're excited to officially announce even more ways to celebrate, sympathize, admire and love. They're right behind the Like button. Just press, hold and enjoy.

Read on to learn ways Facebook's Reactions could affect (and improve) your brand's social media marketing.

For digital marketers, more data is always a positive. With Reactions, you will get a tally of how many likes, shares, clicks and reactions your post receives.

When you click on your Facebook Page Insights and select a specific post, you reveal a specific breakdown of how many Reactions your post got. The most interesting aspect of this data will be the correlation between each Reaction and post clicks.

For example, you could discover that posts that elicit the "Wow" reaction drive more traffic than other Reactions. Now, that's data you can use to create better-performing content.

If you want your brand's Facebook post to get seen, your best bet is to evoke an emotional response. Researchers at the Wharton Business School found there's a strong relationship between emotion and viral content.

Positive content is more likely to go viral than negative — as you may have guessed. Posts that cause a strong response, such as awe, laughter or surprise are more likely to be shared. Most surprising, however, was that the strongest forecaster of virality was the amount of anger the message evoked.

Most brands often want every social post to be positive, so customers associate their brand with positive emotions. Yet, other emotions — especially anger and surprise — can cause content to be shared, seen and even clicked more.

Facebook announced its Reactions will eventually alter the content seen in users' news feeds: "Over time, we hope to learn how the different Reactions should be weighted differently by News Feed to do a better job of showing everyone the stories they most want to see."

In essence, users who prefer "sad" or "surprising" posts will be shown more of those posts — and less of posts that elicit other Reactions.

For now, this isn't a huge deal for your business page. Yet this points to the trend that Facebook is becoming more of a pay-to-play platform for brands.