How do you recover from an upsetting interaction? 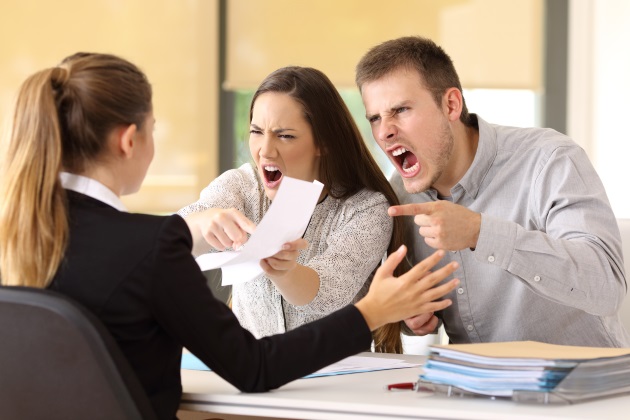 You just had an upsetting interaction with an employee that left you with a sour taste and unsettled spirit. Or you just had an angry customer yell at you because you won’t replace a chair that their dog broke for free. Or perhaps you just had an attempted shoplifter make a scene in order for you to placate their temper tantrum with free goods.

In short, we’ve all had those days when a negative interaction leaves us feeling angry, hurt, resentful, and out of sorts. Totally understandable that when dealing with humans, there’s going to be a negative experience at some point in time.

But what happens when that interaction is finished and you’re not finished feeling upset? When your spirit is off-kilter, how do you attend to the next person without that negativity getting in the way of your usually dazzling service?

One cashier confided that after she’s had a customer yell at her for something unreasonable or out of her control, she has trouble putting on that happy face for the next customer and reverting to her usual perky self. How does she snap out of that ill-temper and go back to delivering excellent customer service to the next customer who had nothing to do with the just-ending negativity?

Even though that disconcerting conversation is finished, the problem is that you’re still in that conversation in your head! You think of all the things you should have said, all the clever retorts you didn’t think of, the policies you could have better explained and defended, all the things you’d like to do to that jerk, and all the ways you should have handled the confrontation and didn’t. You’re busily involved in an internal monologue so, of course, you’re not mentally prepared for the next human interaction.

The risk is that you’re frowning at your next customer for no reason, you’re curt with an innocent employee, or you’re in a rush to mentally convict the next suspicious customer who might be simply fumbling with her purse.

Here’s the deal: you can’t start a fresh conversation with a new person until you’ve finished the old conversation, whether spoken or internalized. You need to close that spigot of emotions before you’re swallowed up in them.

These are some suggestions on finishing that old conversation so you can approach a new customer or employee with a fresh approach, devoid of lingering negativity.

Take a minute — or more if you have the luxury — to finish that conversation in your head; if the next person is impatiently waiting for your attention, you can excuse yourself with am, “I’ll be with you in a moment while I finish this paperwork.” And turn your back so you can write yourself a note — jot down those jumbled feelings. That way, when you face your next customer, you can begin afresh with a cleared mind.

What exactly should you be writing to yourself? It helps to write down all the things you wish you’d said — the act of physically writing on a piece of paper releases you from circular thinking and gets it out of your system.

One manager told me she put mini-greaseboards with uplifting messages near each cashier station; she customized each message to the personality of that cashier, knowing which type of message would be most powerful in the event of an angry customer. The cashiers could glance at that short message during a troubling interaction and quickly re-center; it was such a successful strategy that they started leaving each other cheerleading, positive messages.

Put positive messages near your work station for a quick reminder glance as needed throughout the day to keep you on an even keel.

Find a colleague with whom you can honestly vent without censoring your feelings because of perceived propriety or validity. Feelings are feelings. Honor them. I vividly remember a particularly ugly encounter with a woman. At first I could handle the nasty names and insults. But when she came within inches of face spewing rage, I frankly exploded verbally. It wasn’t pretty.

Fortunately, I had an understanding boss who took me aside, allowed me to vent, and offered practical suggestions on how to remove myself from that kind of volatile situation before I responded in kind. His pep talk validated my feelings but gave me healthier ways of coping. In hindsight, I am more ashamed of my own behavior than hers.

This is the hardest: forgive that nasty person or colleague. It’s possible that that person is struggling with negative feelings from one of their past encounters, and you simply got the brunt of their unresolved negativity. Forgiving someone (without excusing behavior) purges the negativity from your own spirit, so it’s the healthiest thing you can do for yourself. Holding on to anger only hurts yourself, not the person who caused it.

We humans, as the imperfect beings we are, will get irritated by others and irritating to others.

The key is to not let those irritations seep into all your interpersonal interactions and become your usual style of communication.