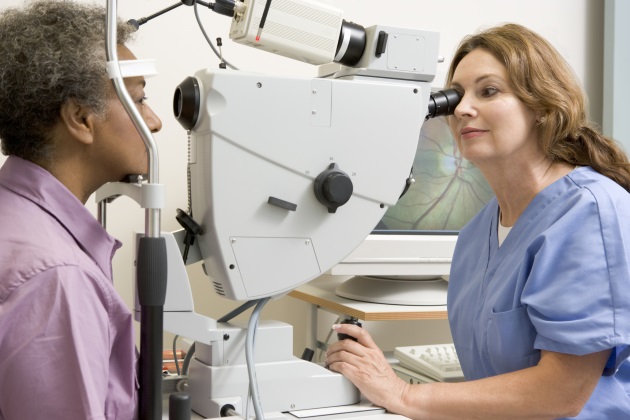 The risk of irreversible age-related macular degeneration (AMD) increases with age. About 10 million people have reduced vision due to AMD in the U.S. The disease is most common among older white Americans, affecting more than 14% of white Americans age 80 and older.

As the proportion of people in the U.S. age 65 and older grows larger, more people are developing AMD. From 2000-10, the number of people with AMD grew 18%, from 1.75 million to 2.07 million. It is critical to catch this condition early and prevent the development of late AMD.

Although the causes of AMD are complex, some of the risk factors, such as smoking, abdominal weight, unchecked cardiovascular disease, and hypertension increase the risk. Long-term exposure to the sun without eye protection also is a risk factor. Recent research suggests that a diet high in consumption of red and processed meat, fried food, refined grains, and high-fat dairy, also may be a risk factor for developing late AMD.

Shruti Dighe, who conducted the research as part of her master's in epidemiology at University of Buffalo’s School of Public Health and Health Professions, studied the occurrence of early and late AMD over approximately 18 years of follow-up among participants of the Atherosclerosis Risk in Communities (ARIC) Study.

Dighe and colleagues used data on 66 different foods that participants reported consuming between 1987 and 1995 and identified two diet patterns in this cohort — Western and prudent or healthy.

The researchers observed that participants who had no AMD or early AMD at the start of the study who reported frequently consuming unhealthy foods were more likely to develop vison-threatening, late stage disease approximately 18 years later.

This study, which was based in the U.S., is one of the first examining diet patterns and development of AMD over time. Other studies were conducted in European cohorts.

Most people who begin noticing visual symptoms are already in advanced or late stage AMD. But not everyone who has early AMD progresses to the more debilitating late stage.

Most research has been conducted on specific nutrients such as high-dose antioxidants, which seem to have a protective effect. According to Dighe, people consume a variety of foods and nutrients, not just one or two, which is why identifying diet patterns helps tell more of the story.

Findings of this study suggest that people should limit their intake of processed meat, fried foods, refined grains and high-fat dairy to preserve vision over time to help preserve good eyesight.