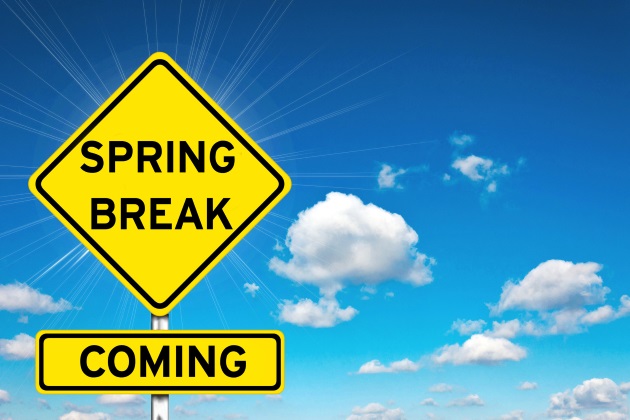 Did you know that 60 percent of students have a run-in with police during spring break travel? With so many spring breakers dealing with police officers, departments need to prepare their officers and enact appropriate regulations to mitigate situations and increase safety.

The main issues with the law during spring break are violence, underage drinking and driving under the influence. The most common spring break-related injuries and illnesses are slips and falls, alcohol poisoning, sun poisoning, dehydration, car accident and balcony fall injuries, according to MDM Commercial.

These facts are not surprising, but they show what areas police departments need to focus on.

Some might wonder if terrorism has become a potential threat during the spring break holiday. However, according to Mitch Slaymaker, Deputy Executive Director of TMPA,"There are not any different preparations due to terrorism that I am aware of. Mainly just preparing for the usual drinking and violence."

Police departments need to evaluate their community when preparing for spring break. The entire purpose of adjusting and preparing is to ensure the safety of everyone in your town during spring break, but at the same time, you have to make sure your police presence isn’t so overbearing that people don’t want to come to your town for spring break.

What have departments done in the past?

Increasing patrols is a standard during spring break. With an influx of people, there must be an adjustment to the number of police to accommodate. But it’s not just more people, it’s the riskier behavior that calls for adjusting patrols in areas where this risky behavior is prone — beaches, bars, etc. Officers should also be teamed up to prevent any one-on-one altercations.

In 2015, Panama City, Florida, decided to take a new approach to spring break, according to WJHG-TV. First, the city began requiring any and all individuals on the beach drinking alcohol to have an ID with them to help prevent underage drinking. Second, it implemented a new ordinance for the month of March that cut alcohol sales off at 2 a.m. Police departments decided on these regulations in order to increase safety.

The police department’s new approach to spring break had some serious consequences, though. Bay County (Florida) Tourist Development Council Director Dan Rowe told WCTV-TV, "the local economy took a $40 million hit from the decline in spring break business." The community was left wondering if the extra safety precautions were worth it.

Could regulations like these benefit other towns, though? Slaymaker believes that "the attempts at trying different strategies to combat the issues is not a bad thing. However, after the attempts, each community must do an after-action debrief and weigh the pros against the cons to see if it was beneficial and if not try something else. Making the changes specific to a certain time frame is not a bad thing so long as it is preceded by an educational campaign."

What are departments doing differently this year?

This year, Miami Beach is banning "alcohol, coolers, speakers, inflatable devices and tents on the beach March 3 through April 16," according to Miami New Times. This is a significant ban to impose, so it will be interesting to see how this affects the community during spring break this year.

Drones are also being used as a safety measure for police departments. Officers can use drones to monitor activity without having to be present at the scene. They can monitor a much larger area more effectively with the use of drones. "South Padre Island Police Department will use drones to assist with investigations and look for missing partiers if needed," according to the Houston Chronicle. It’s a great technology tool to have in your department’s back pocket for these types of situations.

Drones also offer spring breakers more "privacy." With the continued issue of police-community relations, sometimes it might be best to not be physically present, and drones offer that luxury. You are still ensuring the safety and security of the public, but you are doing so from a more remote location.

Communication with spring breakers is key

A great way for you to communicate changes regarding policies and regulations to the community is to utilize social media. It puts the information out there for all of the public to see, and it’s on a medium that a younger generation uses and is more likely to check.

What can your department do to prepare?

Every police department needs to prepare for their community, not every other community. What works for one city might not work for another. One town might need to impose a ban on alcohol sales, while another keeps their alcohol sales regulations the same. One town might crack down on underage drinking, while another might give warnings when no other crime is being committed.

"Cracking down hard or easing up is completely up to each community and the culture of each. A community like Sun City may want to crack down due to their population demographic while the community of South Austin may let more things slide. Each instance must be looked at from the totality of the circumstances facing the officer and it is his individual call to use discretion," according to Slaymaker.

Police departments nationwide are preparing for spring break in their own ways. From increasing patrols to restricting alcohol sales, the preparations are varied. The best thing for police departments to do is analyze their risks during spring break. From there, determine what is best for your community.

Slaymaker offers one last piece of advice: "Know your trouble areas and prepare accordingly. Be proactive and engage large gatherings of people if you see something is starting to go ‘south’ nip it in the bud."