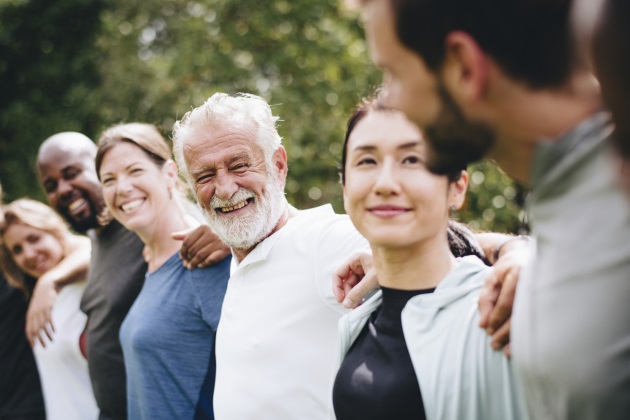 Speculative housing development and the single-family home have been the norm for a large part of the last century. It’s all many of us know about housing works.

But a new wave of cohousing communities across the U.S. features experimenting with a new model of living that places the emphasis back on shared space and shared prosperity.

In this final part in the “Housing America” series of articles, I look at why these communities set up, whether the planning system is equipped to help them thrive, and whether their lessons can be applied more widely to how we build communities.

The concept of communal living is an ancient one, but the roots of modern cohousing are usually traced back to 1960s Denmark, where today a reported 1% of people live in cohousing schemes. It was only later imported to the U.S. by a couple inspired by what they had seen overseas, where it is now an embryonic but growing phenomenon. There are said to be over 60 schemes across the country.

To the uninitiated, cohousing can provoke associations with the "hippy" communes that had a brief heyday in the 1960s. But, while they both advocate a more communal way of life, there are significant differences.

Cohousing communities are intentional communities set up to provide a balance between the autonomy of private space and the advantages of shared community living by setting smaller-than-usual individual houses and flats around a set of shared facilities. These usual include a communal community building and might also include laundry facilities, tools and workshops, community allotments, playrooms and shared kitchens.

Each community is unique; however, the design principles tend to promote social interaction. Like a less contrived variant of New Urbanism, you might think? Well, not really.

While some communities are more radical than others, cohousing has a transformative potential that goes further than design. By enabling more collaborative lifestyles and greater interdependence, it offers a radically different, more collective notion of citizenship, based on shared responsibility.

Communal meals, for example, are a feature in many communities (although often on an opt-in basis). With generally around 20-30 households in a settlement, if each family cooks a meal once a month in the communal dining room, they can simply turn up and dig in for most of the other evenings in the month, paying around $2.50 to $3.50 per person.

Co-housing’s new popularity did not come out of nowhere. We are all familiar with the unintended consequences of the single-family home existence that has become the norm across the West in the late 20th century — Americans don’t know their neighbors any more, children spend a fraction of the time their parents did playing outside, and 1 in 3 older Americans admits to being lonely. Cohousing offers something of an antidote for those with a renewed thirst for community.

For families in particular, cohousing is seductive. Indeed, the first ever community set up outside Copenhagen was in response to a newspaper article, titled "Children Should Have One Hundred Parents."

In many villages outside the West, childcare remains a shared endeavor — with children eating in whichever house they happen to run into after playing. For many in the West, cohousing offers the chance of a richer, more sociable childhood.

There is also some evidence that cohousing can help reduce our environmental footprint. This depends on the decisions of the individual communities — not all push for “passivhaus” standards. But by living in smaller homes and sharing the type of things usually fenced off in individual homes, cohousers need fewer material and energy resources to support their lives.

Appeal across the generations

There are some demographics that are particularly drawn to cohousing. The so-called "baby boomers" left with capacious empty nests but are somewhat disillusioned with suburban subdivisions. But the cohousing way of life fits the millennial profile, too, for those looking for more purpose and connection.

While some schemes are targeted at a specific age group, I see one of cohousing’s major promises as offering hope for more integrated, intergenerational communities — increasingly touted as a solution to the country’s epidemic of loneliness and isolation among the old and the young alike.

Working out the ownership model

Cohousing itself is quite a loose design methodology and does not specify a certain form of ownership arrangement. Some communities — like Takoma Village in Washington, D.C.— are based on much more conventional owner-occupier relation, similar to a condominium.

However, others see cohousing as an opportunity to develop a very different relationship with shelter. This tends to lead to more cooperative-style arrangements, or experiments with new forms of tenure.

The pioneering LILAC development in Leeds, England, explicitly seeks to provide an alternative to speculative housing— a mission to de-commodify shelter. It is set up as a “Mutual Home Ownership Society,” where residents become members and pay in 35% of their net income in return for equity, with no individual mortgages.

The barriers to cohousing

Cohousing communities take years upon years to recruit members, so the “perserverance test” can be the first hurdle for communities.

But beyond that, the planning system is not always able to keep up with the demands of this new type of housing and can be more of a hindrance than a help. The lofty intentions of members often have to be compromised with the reality of the planning system.

There are two major issues to trip up on in the U.S. Firstly, the country’s zoning system — which sets out what type of development can be built where using a set of codes — does not seem to know quite how to deal with cohousing communities, which are neither strictly single-family, nor multifamily housing.

The zoning ordinances can also cause roadblocks in how they deal with zoning the communal building and the minimum parking standards that are only begrudgingly being reformed in more progressive cities. This can get in the way of the pedestrian-friendly open spaces that many cohousing communities create at the heart of their complex.

Secondly, subdivision regulations — a set of standards for everything from pavement widths, to drainage and vehicular access — can pose a serious obstacle for the unconventional site designs often required, and for the collective management of infrastructure that is often sought.

Another more comprehensive challenge is how to keep cohousing inclusive. The original schemes in Copenhagen have become a victim of their own success, and the demand means that young families struggle to afford them due to the premium on prices. In the U.S., too, these communities are, so far, overwhelmingly white, middle-class affairs. And, one might say, a Californian one.

All of these issues need shifting if cohousing is to progress from a grassroots phenomenon to a mainstream one.

Applying the lessons of cohousing

Cohousing is certainly nothing new. It picks up on a thread of communitarianism that has weaved in and out of our societies with changing political winds.

Indeed, a more communitarian approach has been called for by some to bring back the sort of reciprocal obligations that characterized the post-World War II days as a response to modern-day environmental and social crises.

In many ways, cohousing seeks to go backwards rather than forwards — reestablishing a village environment set around community spaces like the church and village hall. But the attraction of cohousing is that it provides a more empowering balance between privacy and social interaction.

This more pragmatic approach lends itself to wider applications in how we design communities outside of the “cohousing” label — can we use both the design principles, the resident-led management setup, and the holistic environmental agenda they promote to rethink how we deliver other communities? There are certainly lessons to be learned, but it must not be forgotten that those who volunteer themselves to live in cohousing communities do not necessarily reflect the priorities and lifestyle aspirations of the average American.

The founder of the first cohousing community was, tellingly, not only an architect but a psychologist. The external form of these settlements can often be modest and unspectacular, but it is less the physical form that is the focus of attention than the relationships that thrive within it, and the unconventional ownership model that often underlies it. As one architect-resident points out, as in any community “everything is not rainbows and unicorns in cohousing,” but it is certainly a new experiment in living that is worth learning from.