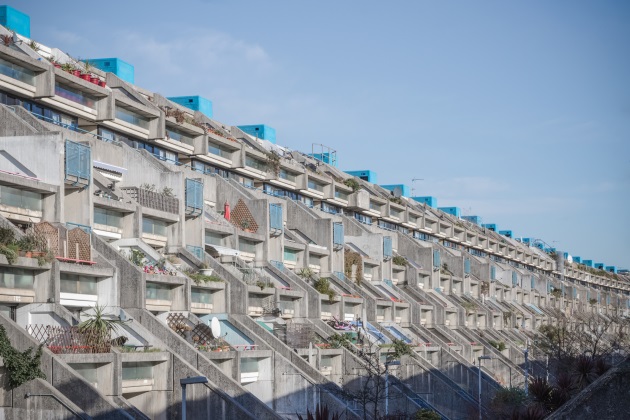 One architect I heard speak at an event last year described those working in her profession as “agents of expensiveness.” It can certainly seem that way, with the pages of most architectural magazines filled with sumptuous private villas or statement skyscraper designed by “starchitect” studios.

One sector that doesn’t come to mind when we think of architectural flair is that of public housing. There certainly has not been much cash to flash about recently. But it has not always been that way, and some are making steps to raise our expectations of the design of affordable and public housing.

Can design really save the day? Or are the deep-rooted problems underlying the U.S. housing crisis beyond the reach of design saviors?

The postwar years: architectural experimentation for the masses

The architects of many postwar housing schemes were are the forefront of experimenting with form, largely along modernist lines. In the U.K., the architecture department of the London County Council were at the forefront of one of the most innovative periods of design in the century.

Postwar architects in Milan responded to the housing shortage with bold designs littered with motifs drawn from Roman amphitheaters— it is difficult to square that with the level of thought that goes into affordable housing today.

However, not all of the innovation resulted in high-rises and "streets in the sky" like Minoru Yamaski’s infamous Pruitt-Igoe towers or Le Corbusier’s "Unites d’habitation." Celebrated British architect Neave Brown brought a similarly visionary approach to more ‘human-scale’ low-rise housing in London complexes like the Alexandra Road Estate.

These architects were designing accessible utopias. Despite the problems caused by lack of maintenance and design flaws discovered since, at the core of the experiment was a belief that public housing tenants deserved the same (or better) standards of design as those on the private market. However, from the 1970s, a growing sense crept in that affordable housing does not deserve the highest standards of design as that priced for the highest bidder.

It appears that, gradually, the attention of young and cutting-edge architects is turning again to public housing. This is driven by a turn to “social justice” architecture. In Vancouver, Henriquez Partners Architects goes so far as to claim that "architecture should be a poetic expression of social justice," and housing is a part of this new drive. The convener of a recent exhibition on social housing in London detects a confidence and design ambition not seen since the 1970s.

The new generation of social housing architects are perhaps more modest than their forebearers — creating more sensitive buildings that have flashes of character but largely concerned with subtle issues of massing and scale rather than statement pieces of the postwar era. They tend to draw on traditional street patterns and shared spaces as a setting and speaking more to the neighborhood that surrounds them. Although the biophilic aspirations of Stefano Boeri’s Trudo Vertical Forest in Eindhoven, and a texturally cladded project in the French town of Chalon-sur-Saône perhaps buck the trend.

British architect and social housing advocate Paul Karakusevic has attempted in his firm’s projects to combine modernist and suburban aesthetics to create designs that are both places people want to live (rather than lofty experiments) and suitable for the realities of today’s cities.

There has also been a concern with so-called "tenure-blind" housing — public or low-income housing should not look like public housing, but merely like housing.

So how is the U.S. faring? There is certainly much less appetite for direct delivery of housing in American cities, and the task is often left to private developers. However steps are being made to be more demanding of those developers. The prospect of Kanye West being left to revolutionize social housing design as a spinoff of his fashion label is somewhat disquieting. But the vision of David Baker for a West Africa-inspired affordable housing complex for the elderly in San Francisco is more heartening.

Neave Browne argued that to reinject dignity into public housing, governments need to take inspiration from the Parker-Morris standards of 1960s U.K. — "Houses for Today and Tomorrow" not only raised space standards but allowed greater flexibility to experiment with design.

On a policy level, newly released New York Design Guidance — produced in collaboration with the Fine Arts Federation and the American Institute of Architects — is a modern-day attempt in the U.S. Given a different context for state financing, this guidance is designed as a framework to keep private developers in line, but is designed to provide a step change in expectations of affordable housing.

The limits of good design

The delicately Photoshopped visions of this new era of experimentation are certainly cheering. But I remain concerned that too much is loaded onto the (important but supporting) role of good design in providing decent housing for all.

Design has been blamed for everything that has gone wrong with the previous generation of experimental housing projects — however, in London, flats in modernist estates are now increasingly popular as an option for private buyers, suggesting that their design cannot be so bad as some suggest. Ben Austen, author of a book on Chicago’s Cabrini-Green complex agrees that too much is blamed on bad architecture — the much-cited sins of the super block and "indefensible space."

Similarly, setting higher standards for design today is only one step toward solving a housing crisis that was born of systematic wealth inequalities exacerbated by housing, the racially charged ghettoization of concentrated areas of poverty, the collapse of the idea of publicly funded and managed housing stock, and complex dynamics of gentrification and displacement in many U.S. cities.

Can design save housing?

The U.K.’s late Neave Brown spoke in an interview of how "my generation, going into architecture after the war, felt we were going to make a new England. … We were trying literally to create a more egalitarian society." If we can ever say that the time has come for that sort of spirit to emerge again, it is now, and it is possible that architects have a role.

But can design save the world? I, for one, think not. Instead it is political will, and the flow of funding through the system, that truly determines decent housing. Without this, all the creative young architects in the world will cannot rescue a country from a housing crisis.