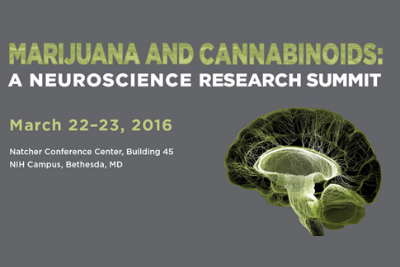 The National Institutes of Health (NIH) sponsored "Marijuana and Cannabinoids: A Neuroscience Research Summit," which was held March 22-23 in Bethesda, Maryland. This conference was the first meeting of its kind with a such a strong commitment and federal representation.

The focus of the event was research related to the neurological and psychiatric effects of marijuana, other cannabinoids and the endocannabinoid system. What was unique was that both the adverse and the potential therapeutic effects of the cannabinoid system were presented. The primary goal was to disseminate evidence-based information, which is particularly important given the rapid changes in the perception and legal distribution policy of cannabis for medicinal and recreational use.

Attendees at the conference came from all over the United States and were diverse in expertise and professional affiliations. Among those attending were researchers, law enforcement officials, social service providers, clinicians and government professionals.

Nora D. Volkow, M.D., director of the National Institutes of Drug Abuse, and Walter J. Koroshetz, M.D., director of the National Institute of Neurological Disorders, provided the opening remarks. Topics included an overall review of the endocannabinoid system, impact on brain development and function, policy, addiction and comorbid alcohol use, therapy in epilepsy and multiple sclerosis, driving and psychomotor function, pain and posttraumatic stress disorder therapies and the concluding topic of research and policy.

While there were the usual topics addressing some of the concerns about cannabis use, the treatment potential of cannabis was also emphasized. Ivan Soltesz, Ph.D., from Stanford University discussed cannabinoid signaling in epilepsy. His work focuses on the nature of neuronal network inhibition and the brain's rhythms in epilepsy.

Amy Brooks-Kayal, M.D., from the Children's Hospital Colorado provided a lecture that gave a perspective of cannabinoid treatment for pediatric epilepsy. David Gloss, M.D., MPH from the Charleston Area Medical Center presented information on the therapeutic potential of cannabinoids in the treatment of multiple sclerosis.

The use of cannabinoids to treat pain and anxiety was a focus of one session. Andrea G. Hohmann, Ph.D., from Indiana University discussed pain suppression. The therapeutic potential to treatment neuropathic pain with studies of vaporized and smoked forms of cannabis is the focus the research of Barth Wilsey, M.D., from the University of California San Diego.

The preclinical studies related to the endocannabinoid system in the prefrontal cortex and the processing of fear and anxiety were the focus Cecilia Hillard, Ph.D., from the Medical College of Wisconsin. The topic of post-traumatic stress disorder was addressed by Christine Rabinak, Ph.D., from Wayne State University. Her research utilizes methods drawn from behavioral, affective and cognitive neurosciences to study the mechanisms underlying fear. She uses animal models, healthy participants and patients with PTSD.

The Commissioner of Food and Drugs Administration, Robert M. Califf, M.D., provided the closing remarks. The nature of the conference and the high representation of key researchers and the level of government agency representation indicates a commitment on the part of those who are integral in moving any form of medical treatment forward.

This meeting demonstrates an interest and commitment to furthering the science of cannabis and cannabinoids. This is important to those patients who may benefit. It is also important for those citizens who may be harmed.