Help from above: Drones may one day save lives 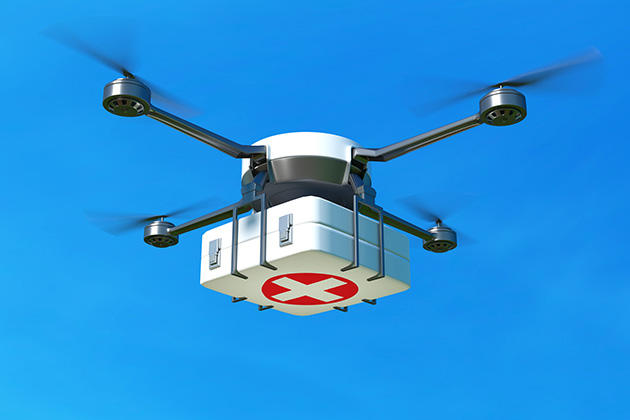 Drones are currently useful for capturing breathtaking pictures and video from the air, and in a variety of military capacities. As the capabilities and technology of drones expand, Amazon and other companies are looking into using these unmanned aerial vehicles to deliver packages.

Researchers from Karolinska Institutet in Sweden think that drones might also be useful for delivering life-saving medical equipment directly to patients during a health emergency.

In a recent study simulating out-of-hospital cardiac arrests (OHCAs), the researchers compared the amount of time it took for drones to deliver an automated external defibrillator (AED) with the time it took for emergency medical services (EMS) to deliver the life-saving device. According to the results published by JAMA, the drones reduced response time by about 16 minutes.

OHCA in the United States has low survival rates, at 8 to 10 percent. Reducing time to defibrillation, initial presenting heart rhythm in ventricular fibrillation, and whether someone witnesses the event are the most important factors for increasing survival in patients suffering cardiac arrest outside a hospital.

Reducing response time with the current means of EMS is a daunting task — adding manpower is expensive, local ordinances may restrict ambulances to the posted speed limit, and heavy traffic can increase response time. Drones overcome many of these challenges because they are not subject to speed limits, they are not manned, and they fly in space unhindered by traffic.

To use drones to deliver emergency medicine, a dispatcher activates the drone and sends it to the address provided by the 911 caller. The drone may then carry an AED to the location for use by a bystander.

Andreas Claesson, R.N., Ph.D., of the Karolinska Institutet, and colleagues teamed with the Swedish Transportation Agency to develop and certify the drone used in the study. The agency equipped the drone with an AED weighing 1.7 pounds, a global positioning system (GPS), a high-definition camera and an autopilot software system.

The researchers chose a fire station where several OHCAs had occurred within a 6.2-mile radius between 2006 and 2014 to serve as the drones' base station for the study. Using the GPS and autopilot software system, the drones made 18 remotely operated out-of-sight flights in October 2016. Median flight distance was about two miles.

The median time from the 911 call to EMS dispatch was a lengthy 3 minutes. In comparison, it took only 3 seconds to launch the drone.

Drones also arrived much faster than EMS. The time from drone dispatch to arrival was 5:21 minutes for the drone, while it took a median time of 22 minutes for EMS to arrive. The drone arrived more quickly in every case when compared with EMS. The median reduction in response time was an astonishing 16:39 minutes.

"Saving 16 minutes is likely to be clinically important," the authors write in a news release. "Nonetheless, further test flights, technological development, and evaluation of integration with dispatch centers and aviation administrators are needed. The outcomes of OHCA using the drone-delivered AED by bystanders vs resuscitation by EMS should be studied."

The study was limited in that it included a small number of flights occurring over short distances and in good weather. More research using drones for longer flights and inclement weather is needed. Researchers have not yet established whether drones reduce response times in real-life situations.