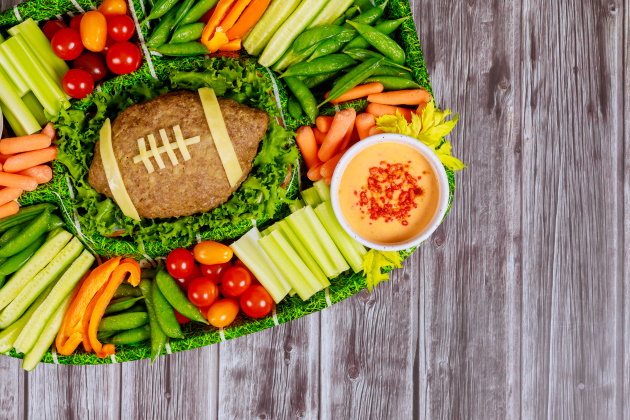 Skip the frying and opt for baked snacks and fresh veggies this Sunday.

Super Bowl LIV is taking place Sunday in Miami. The Kansas City Chiefs and San Francisco 49ers will headline the biggest day in all of American sports.

The most significant football game of the season features good football, plenty of television advertisements, a marquee halftime show and millions of fans expecting the unexpected.

There's also food — lots of good food. Super Bowl Sunday dining is an event, but as the years pass, it’s turned into one of the unhealthiest times of the year.

With Super Bowl foods come extra calories, cholesterol, sugars, sodium, saturated fat ... anything and everything that can raise your A1C levels, spike your blood pressure or put major strains on major body parts. Per statistics from the Center for Science in the Public Interest, unhealthy eating, along with physical inactivity, is causing more and more cases of obesity, various diseases and even death.

Many say that the Super Bowl is merely one day out of the year in allowing unhealthy eating. But whoever said you can't enjoy eating during the Super Bowl while also finding healthy alternatives in the process? Contrary to popular belief, it can happen.

Check out these five alternatives for some of the most common foods served during the Super Bowl.

A party ain't a party without wings at the table, right? Classic wings involve deep frying the wings, then smothering them in sauce. But what if you tried roasting the wings?

"Oven fried or air fried can decrease some of the fat and still taste great," said Jennifer Pruitt, a licensed vocational nurse based in the Dallas area. "Especially if you like a little crunch."

Roasting a wing then tossing them in your sauce of choice can make for a great coating. Many love lemon pepper wings. Think of how tasty this can be, and you'll be able to keep the traditional flavors for a fracture of the calories and carbs.

An extremely underrated Super Bowl delicacy, the meatball can be cooked so many different ways. Rarely do they fail because of the versatility they carry. But instead of frying them, bake them.

"Baked meatballs will save you a few calories. It's also much easier to make larger batches than pan frying," Pruitt said.

We've mentioned the versatility: A Super Bowl party can hold a beef meatball, a chicken meatball or both. Either way, you're getting an MVP dish.

Potatoes, cheese, bacon and sour cream. It's enough to make your mouth water simply thinking about a classic recipe for a potato skin. Unfortunately, potatoes are the worst when focusing on bad carbs.

If you need to eat potato skins, go with a potato that's a little better for you — sweet potatoes.

If you're looking to give sweet potato skins more of a classic taste, use a twice-baked method for crispness. Bake the skins with low-calorie mozzarella cheese.

When it comes to your favorite drink not named beer, you can fill in the blank on a great soda. There's a very good chance you'll see your favorite soda advertised during Super Bowl commercials.

Each regular soda is a sugar wonderland and loaded with calories. Fortunately, zero-calorie and sugar-free sodas exist. And even better, many of those soda alternatives taste like the real thing.

"Most people take in a high amount of empty calories from sodas," Pruitt said. "While water is best, the zero-calorie sodas can quench those cravings with great taste and without added calories or sugar."

This could be the granddaddy of Super Bowl foods. It's cheesy, filling and absolutely a go-to option, as a good pizza could be just a phone call away.

If you're willing to get the same feeling after eating, but also take in only a third or so of the calories, allow us to introduce you to fathead dough.

Simply put: Almond flour, cream cheese, eggs and a little bit of preparation time will create a dough that could revolutionize food intake if it ever becomes less of a secret.

"Ahh, fathead dough. Fewer calories, far fewer carbs, versatility, flavor," Pruitt said. "Perhaps the best invention of the century. It can be used for pizza, cinnamon rolls, pigs in a blanket, hot pockets ... the list goes on and on."

A made-from-home, medium-sized fathead dough pizza with pepperoni, sausage, green peppers, mushrooms, sauce and cheese can run roughly 600 calories — for the whole thing. That could be the caloric intake of a slice and a half from a conventional pizza restaurant. Fathead dough is food's best-kept secret.

Enjoy Super Bowl Sunday. Have fun with friends. Enjoy the commercials. Root for your favorite team. And when it comes to eating, enjoy all the flavorful options — but give these alternatives a shot in the name of better health. Your body will thank you.