Groupthink and healthcare: An unhealthy alliance 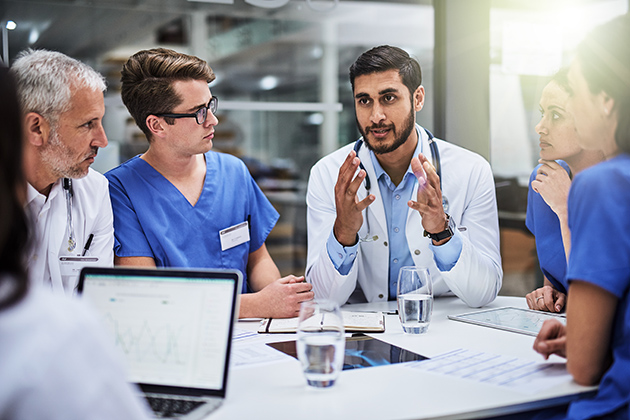 The term “groupthink” has been in popular usage since the 1970s, and its applicability to the multibillion-dollar 21st-century healthcare industry could not be more salient than it is today when we need more creative solutions to vexing problems than ever before.

Initially coined in 1974 by Irving Janis, a professor of psychology at Yale University, in reaction to terminology used by George Orwell in his seminal novel “Nineteen Eighty-Four,” it is defined by Yale Alumni Magazine as when “a group of intelligent people working together to solve a problem can sometimes arrive at the worst possible answer.”

Those firmly ensconced in the healthcare ecosystem can likely agree that groupthink plays a larger role than we would like to believe.

When Groupthink Rears Its (Misguided) Head

In the healthcare milieu, problem-solving frequently occurs from the top down, often without the valuable input of those with boots on the ground. When such changes are in the planning stages, staff members (who are often seen as nothing more than mere cannon fodder) are not consulted and typically told to suck it up and not ask questions because “this is the way we’re doing it now.”

Within nursing, when a staff nurse questions a particular accepted practice, the most dangerous words to be spoken in response are, “Well, that’s the way we’ve always done it.” In nursing, groupthink can keep nurses utilizing practices that are not evidence-based simply because change is too bothersome. Thus, in many instances, woe to the innovative nurse who has a new solution to offer.

Another form of nursing groupthink is the hazing and bullying of new nurses. In this form of groupthink, a more seasoned nurse might say, “Well, I was hazed, bullied, and sabotaged as a new nurse and now it’s my turn to get some payback; why should these new nurses get off easy?” This spurious practice is a significant driver of nurse attrition from the profession within the first few years following graduation and licensure; in terms of nursing shortages, this is a very unfortunate calculus indeed.

In medical education, groupthink occurs in the long sleepless hours worked by medical residents. Often awake for more than 24 hours at a time, the evidence is clear that such extreme lack of rest leads to mental fatigue, physical exhaustion, burnout, depression, poor judgment, and medical errors.

While some headway has been made in legislating residents’ hours, the reality is still mostly the same, with severely compromised residents populating teaching hospitals throughout the country like an army of highly educated zombies. Whoever still blindly supports such cruel and ineffective indoctrination is an obvious adherent to groupthink that absolutely endangers patients.

Innovative thinking is the natural enemy of groupthink. While some may readily embrace groupthink as the modus operandi of American healthcare, others push back against such ignorance with the power of the creative mind.

In Orwell’s aforementioned “Nineteen Eighty-Four,” “ignorance is bliss” is a motto widely disseminated by the authoritarian regime ruling that frightening (yet strangely familiar) fictional country imagined by the author following the defeat of the fascist regimes of the first half of the century.

Healthcare is not an industry where groupthink, blissful ignorance, or pandering to the powerful produce any appreciably positive results. To the contrary, groupthink and its accompanying lack of knowledge or forethought are what has lent an air of inevitable dysfunction to healthcare delivery, especially in the United States, where we spend more per capita for far worse outcomes than any other industrialized country.

Historical rejection by the medical establishment of alternative/complementary therapies has kept many potential solutions out of the hands of consumers, and the death grip of insurance companies on politicians’ reelection campaigns also drives groupthink in the White House and the halls of Congress. Outright rejection of single-payer and related solutions also stymies creative approaches to our current situation, not to mention the denial of climate change, a true public health crisis of unprecedented proportions.

The Rise of Innovation

In what remains of the 21st century, we need more leaders, influencers, researchers, innovators, and rank and file clinicians to rise to the occasion and provide us with new fixes to longstanding problems.

The outright rejection of groupthink and ignorance is paramount if we are to move forward. Weak-willed and ineffective politicians, mercenary insurers, greedy pharmaceutical companies, cadres of lobbyists, and others standing in the way of innovation and positive change must be thwarted by most any means necessary.

As the millennial generation enters into full leadership of most industries worldwide over the coming decade, we must hold out hope that the younger generation can succeed where its predecessors failed. Healthcare costs are out of control, Americans continue to get sicker, and we spend more for less with each passing year.

We need creative, courageous minds to gather together, reject groupthink, swear off the status quo, and move us into a brighter future. Without such leadership, groupthink and its stalwart companion ignorance will continue to hobble our best efforts.

Who will lead the charge, dear Reader? Look no further than the face in the mirror.