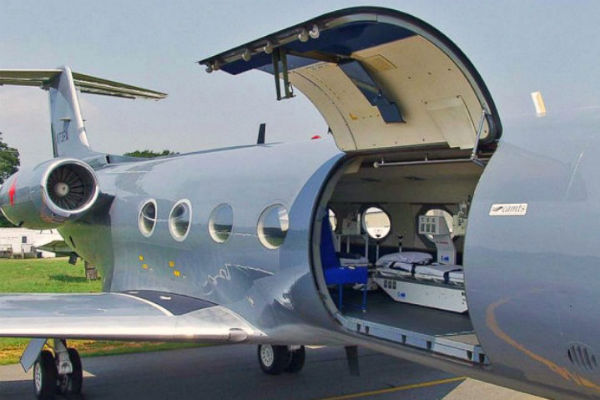 For those who toil in it, the business is often unglamorous: flying very old airplanes to remote locales, modest to horrible on the road lodging, and the constant stress of life on call. Still, there are no shortage of takers for the profession, and the Ebola epidemic demonstrates they are needed now more than ever.

Phoenix evacuated medical aid workers Dr. Kent Brantly and Nancy Writebol from Liberia last month on separate 14-hour flights — including fuel stops in the Azores and Maine — in a specially modified 32-year-old Gulfstream III, call sign Gray Bird 333, which had once done duty with the Royal Dutch Air Force and was still painted in its gray military livery.

In the global air medical business, this is considered a relatively "new" airplane. Most are even older — and smaller, such as ancient Hawkers and Learjets.

The flight planning was extensive but had really begun five years ago when Phoenix worked with the Centers for Disease Control (CDC) and the U.S. Department of Defense to develop an adult-sized containment unit — more properly an Aeromedical Biological Containment System — designed to protect air medical crews from being infected by the patient. The flight needed the blessing and assistance of no fewer than a dozen government agencies and after each flight the entire aircraft had to be decontaminated.

By all accounts, the all-volunteer crews performed flawlessly. Brantly and Writebol were transferred to isolation suites at Emory University hospital in Atlanta, successfully treated and released within weeks.

Most Ebola victims are not nearly as fortunate: the fatality rate for those infected is around 60 percent and close to 1,600 have died in this latest outbreak. Last week, CDC Director Dr. Thomas Frieden said he expected the outbreak to rapidly increase and that the window may be closing to effectively contain it.

Habitually ripped open by terrorists, civil wars, droughts and famine, Africa just doesn't have the resources to deal with things like Ebola. Dozens of the dead in this latest outbreak have actually been the already all-too-scarce healthcare workers in the region. Survival means getting patients to a higher level of care and fast.

Sadly, the resources simply are not deployed to transport everyone who needs care. However, intelligent fielding of air medical resources could save many. And sometimes help comes in the form of a 32-year-old airplane named Gray Bird 333.