Grading on what students learn, not what they earn 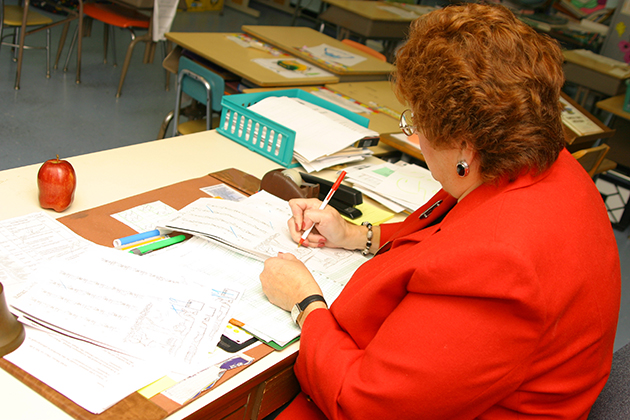 Ask high school teachers how they handle a student who doesn't submit an assignment, and their answer most likely will be this: "The student receives a grade of a zero for that assignment."

Ask those same teachers to explain their justification for that practice, and I'll bet you will get an answer like this: "The zero will lower the student's overall grade, thus motivating him/her to try harder next time. The zero serves as a punishment for not doing the work in the first place."

School leaders, I'm going to be blunt with you. If these answers seem acceptable to you, I am here to tell you as a fellow school leader that you need to rethink what the purpose of grading is. Grading does not exist to punish students. Low grades such as zeros will not motivate students. The true purpose of grading is this: Grading is about what students learn, not what they earn.

Last month, Deborah Yaffe of District Administration wrote a compelling article to school leaders that made the case for no more zeros in K-12 education. In the article, Yaffe argued for no-fail grading methods designed to better reflect students' knowledge and abilities.

She quoted University of Kentucky professor and long-time grading reform proponent Thomas Guskey, who said this about the practice of using zeros: "It's such an extreme score in a percentage grading system. To recover from that single zero, a kid would have to get at least nine perfect papers."

Yaffe went on to describe how many schools are moving away from 100-point grading scales in favor of 4- or 5-point scales. In these standards-based or competency-based grading systems, grades truly represent what students know and are able to do. Academic grades are separated from behavior grades.

Throughout a course, students have the option to reassess their work. Students do not have the option to "take a zero" and refuse to submit work. Finally, the practice of averaging quarter or trimester grades to arrive at a final grade does not exist.

For those of you who follow my MultiBriefs articles, this is not the first time I have written on this topic. In this 2014 article, I offered teachers this challenge: "Think differently about how you grade your students. Don't settle for the way things have always been. Strive to make your grading practices capture the learning that is taking place with each of your students."

In this January 2016 article I wrote about one of the biggest challenges schools face when they eliminate zeros from their grading system: handling late work (without penalty). Finally, in this July 2016 article I wrote at length about how schools are rethinking what it means to fail, in much the same way that Yaffe describes.

"This movement to rethink zeros and failing grades is part of a larger philosophical shift to standards-based and competency-based grading systems," I wrote. "In such systems, grades represent what students learn, not what they earn."

Earlier this year, I published a book with colleague Jonathan Vander Els entitled "Breaking With Tradition: The Shift to Competency-Based Learning in PLCs at Work." There, Jon and I tackle the issue of rethinking grading within the context of a much larger system of school redesign to one known as competency-based learning.

In the book, I talk about how traditional grading systems invite students to "play the game of school," looking for ways to earn easy points (things like participation, homework and extra credit), while avoiding ways that they may perceive as harder to earn points (such as performance on comprehensive summative assessments).

Making the transition to a standards-based grading requires school leaders to consider a number of things.

Perhaps one of the best resources on this topic has been put together by Ken O'Connor, author of "How to Grade for Learning: Linking Grades to Standards." In this book, now in its fourth edition, O'Connor expands upon the research on motivation, mindset, learning styles and beliefs about grading to help teachers assign grades that are, according to the website for the book, "accurate, consistent, meaningful, and supportive of learning."

For educators who are on Facebook, O'Connor hosts a large open discussion group called Standards Based Learning and Grading. In this professional learning network, educators from the U.S., Canada and other countries engaged in this work pose questions and dilemmas for others to respond to.

Next time you are looking at a student's high school transcript, ask yourself these questions. What do these final grades represent? Are they an accurate representation of what the students know and are able to do? Are they influenced by nonacademic factors such as extra credit or other academic behaviors? Most importantly, are the students' grades a true measure of what they learned, rather than what they earned?

It is time to rethink grading in our schools.