GMO apples: Coming soon to a grocery store near you 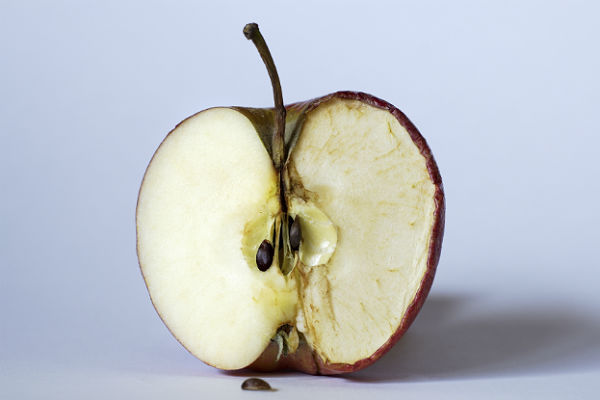 The U.S. Department of Agriculture recently approved two new genetically modified apples — Arctic Granny Smith and Arctic Golden — for sale in the United States. Amidst the GMO war that is raging across the country, this new development may well be fodder for more debates.

Typically, apples turn brown pretty fast once they are cut. Developed by a Canadian biotech company, Okanagan Specialty Fruits Inc., these new types are genetically altered to prevent them from browning after they're sliced or get bruised.

The Agriculture Department has cleared these varieties since they don't pose any harm to other plants or pests. Perhaps as an appeasement to GMO detractors, they also added that these apples have no "significant impact on the human environment."

It has been a long three-year wait for the company, which is planning to have these on shelves by 2016 in small, test-market quantities. They are now awaiting a voluntary review by the FDA before their products enter mainstream markets, though the FDA approval is not officially needed.

Okanagan feels that their products will meet with a resounding success since the demand for presliced apples has been on the rise for some time. These are used in a variety of end products like the manufacturing of juice, in fruit salads, salad bars and even as ready snacks.

Okanagan has announced that their R&D division is working on creating other apple varieties — like versions of Gala and Fuji — that will be browning-resistant, too.

Approval or not, there have naturally been concerns from food safety groups and natural food advocates over the possible repercussions. Some like the nonprofit Center for Food Safety are concerned that the nonbrowning feature may hide the fact that the apples are not so fresh anymore.

Friends of the Earth has urged both McDonald's and Gerber to reject the Arctic apples, since they have yet to be tested for 100 percent safety. The Environmental Working Group has stressed on the need for clear, mandatory labeling of GMO foods. The Food & Water Watch has criticized the USDA's approval by saying that this move will be detrimental U.S. apple growers.

But Neal Carter, the president and founder of Okanagan, was not overly concerned by the detractors. Instead, he stressed the fact that they have put these apples under rigorous reviews and a decade of field trials that prove that these are as good as regular apples, safe to eat in every way. Carter says the genetic engineering process simply suppresses the gene that turns the food brown.

What's more, this will mean fewer apples will be discarded as rotten, leading to less spoilage, positively contributing to food security. Brown or otherwise, it may take a few years for the true results to be revealed since it takes apple trees several years to harvest fruit and produce in volumes.

In case you didn't know, there are already GMO soybeans and corn available in market. And a bruise-resistant GMO potato that doesn't brown has also been approved by the USDA and is all set for commercial planting.

In the GMO vs. natural food war, it seems America is still leaning heavily toward the former.