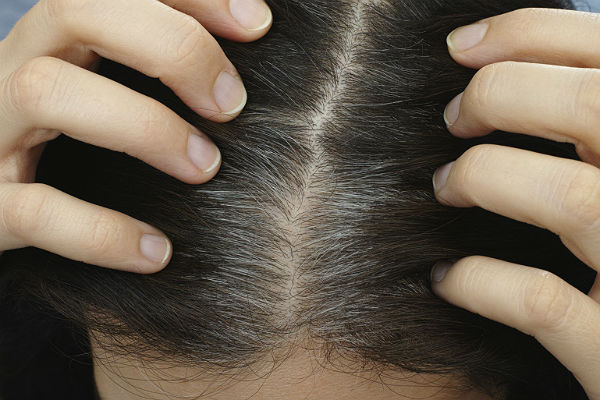 Spotted a few gray hairs lately? It turns out there could be more to blame than stress or aging.

A large international study has uncovered the first gene identified for causing gray hair, which confirms graying is not based solely on environmental factors. The study, published this month in the journal Nature Communications, looked at more than 6,000 Latin Americans and identified a total of 10 genes affecting with hair shape, graying, monobrow, eyebrow and beard thickness.

The researchers studied both men and women for hair shape, color, balding and graying, but only tested men for beard, monobrow and eyebrow thickness. Lead study author Kaustubh Adhikari, a researcher at University College London, said this is the first time a gene for graying has been identified in humans.

The gene, IRF4, is known to affect hair color, but has never before been associated with hair graying until now. The study was also the first to identify a gene found to affect hair shape and beard thickness (EDAR), eyebrow thickness (FOXL2) and monobrow (PAX3).

Understanding the IRF4 gene could help scientists curb graying hair in the future. However, Adhikari noted that no gene acts in isolation or is the sole determinant of any trait.

"In the case of aging-related traits such as hair graying, several external factors have an effect on them, such as biological age, diet, environmental exposure such as pollutants, stress, etc.," Adhikari said in an interview with MultiBriefs Exclusive.

IRF4 helps regulate production and storage of melanin, the pigment that determines hair, skin and eye color. The absence of melanin causes gray hair, so understanding how IRF4 affects gray hair could help develop cosmetic applications that prevent or slow graying of hair, according to the study.

"For example, a drug that has effects on the melanin production pathway in hair follicles as the follicles develop internally might reduce the need to apply external hair dyes on the scalp hair after it comes outside," Adhikari said.

An initial avenue of research may involve the role IRF could play in survival and maintenance of hair melanocyte (cells that make the melanin pigment), he said. "Investigating the interaction of IRF4 with another key pigmentation gene (MITF) could be crucial in this respect."

These findings could also be used to help criminal forensics cases, using the DNA to reconstruct faces of criminals or victims based on their genetic makeup, according to the study.

Previous research in this area has used samples of primarily Europeans, but the results of this study using the wider genetic makeup of Latin Americans — who encompass a widely mixed genetic heritage, including European, Native American and African ancestry — could not help forensics teams in Latin America and East Asia.

"For several hair traits we have presented the first known genes related to them, which means these additional hair features can now be included in the set of physical characteristics for which forensic predictions are feasible," Adhikari said.

But for now, more research is needed before any real cure for gray hair is found.

"That is something we can hope in the long term as we study these genes and these features in more detail," Adhikari said.