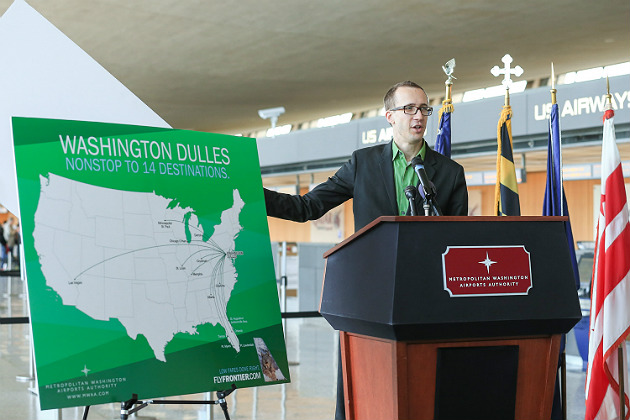 Frontier Airlines has set its sights on Washington Dulles Airport for expansion by announcing 14 new routes from the airport. The airline features low-cost fares that will compete against the existing carriers at the airport, and encourage passengers to fly again after a period of decline.

Of these, only Fort Myers is a new destination for the airport, with all others served by rival airlines. Of the new services, Frontier will only operate one (Orlando) daily at the start. Others will operate at a maximum of six weekly flights.

Along with the launch of these services, Frontier also introduced a sale, with flights available for just $15. Demand was so high that the Frontier website crashed. However, a promise that ticket prices in general would be kept "ultra low-cost" should ensure travelers take notice.

Dulles will become Frontier's third-busiest destination by the time all routes are opened, but it will remain a focus city rather than a full hub. The airline is able to introduce these services by introducing better utilization of its aircraft, rather than cancelling service elsewhere.

Dulles has seen a steady decline in domestic services over recent years, with a high of 22 million in 2005 down to just under 15 million in 2013, and a 6 percent drop over the past year. It has had no domestic route development from any of its airlines in over a year, so it is welcome news to be able to bring a greater offering to passengers in the hope that the decline will be stopped.

Despite announcing this growth at Dulles, it should be remembered that Frontier already operates a service to Washington's other airport, Reagan National, from its Denver hub. There have been no announcements over whether this will continue or transfer to Dulles in the future.

"With the Washington-area economy growing and the Metrorail Silver Line on the way, Dulles will continue to fill the expanding air travel needs for the region, and these new options from Frontier will play an important role. We welcome Frontier aboard."

Dulles has also had a number of international service announcements in recent months, including a new Air China route to Beijing starting in June, additional United Airlines routes to Canada in August, and British Airways bringing its Airbus A380s in September.