Construction has begun on the first phase of the next major expansion at Germany’s largest airport in Frankfurt, which will dramatically increase the airport’s capacity, create thousands of new jobs, and a bring boost to the national and regional economies.

Terminal 3 has been in the preparation stage for a number of years, with the airside apron and the building’s basement level works already completed. Now, the cornerstone of the above-ground works have been laid by Fraport AG, the airport’s operator, and it hopes to have the terminal’s first pier in operation within two years.

Built on the south side of the airport, opposite existing Terminals 1 and 2, Terminal 3 will eventually boast a capacity for 21 million passengers per year.

Initially with a three-pier design, somewhat mirroring Terminal 1 on the north side, this new structure has been designed to be built in stages and adapted easily in the future should further piers be required.

Pier G will be the first built, along with the main terminal building and its check-in, baggage and security areas. This pier will be ready in 2021 and allow 5 million passengers to be handled. Then, Piers H and J will be completed by 2023.

Architect Christoph Mäckler explained the terminal’s design as follows: "What passengers want before and after flying is, more than anything else, rest and relaxation. This was an essential leitmotif for designing Terminal 3, alongside maximizing the technical and functional flexibility of the building complex. The light-flooded interior spaces feature high-quality materials in warm natural hues to evoke a pleasant ambiance that invites passengers to relax and stay a while. In this respect, the new terminal will be the first of a new generation worldwide." 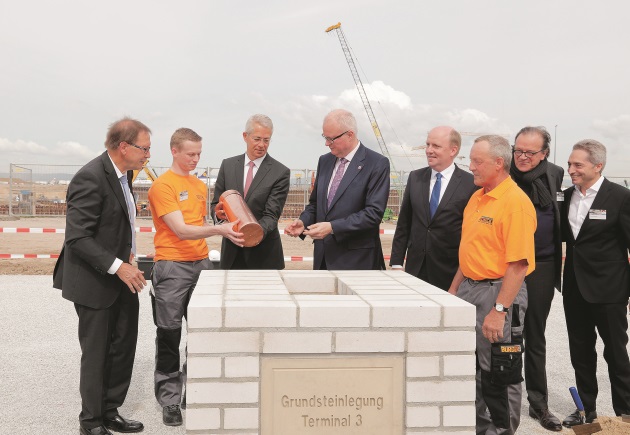 At the ceremony to lay the cornerstone Fraport CEO Schulte said: "No other aviation hub in the world offers more destinations to business or leisure travelers than Frankfurt Airport. And Terminal 3 will further strengthen Germany’s most important gateway to the world."

A Fraport board chairman said, "It’s good news that one pier can be completed ahead of the rest." He added: "This leaves no doubt that we were right to opt for an architectural design that could be flexibly adjusted as required."

Frankfurt Airport served 14.8 million passengers in the first three months of 2019. This is an increase of 2.5% over the previous year, with aircraft movements also up. The airport has recently become an operating base for low-cost carrier (LCC) Ryanair, which accounted for 3.6% of capacity, and is targeting the leisure market traditionally held by German carrier Condor, and the business market dominated by Lufthansa.

Since low-cost operations are now an operational fact of life for Frankfurt, it is moving with the times by making dedicated provision for their needs.

While the ultimate list of users of Terminal 3 has not been revealed yet, Pier G of the new terminal will be used by low-cost carriers, at least initially. It will use bus gates rather than jet bridges, suitable for the fast turnaround times demanded by airlines like Ryanair. This will allow the pier to be brought online much quicker.

While not alluding to LCCs directly, Finance Minister Thomas Schäfer said: "The construction of Terminal 3 is an important step for strengthening the airport’s competitiveness" and that inevitably means this kind of operator, even at traditional large gateways like Frankfurt.

An information site to follow progress of the build is at https://terminal3.frankfurt-airport.com/