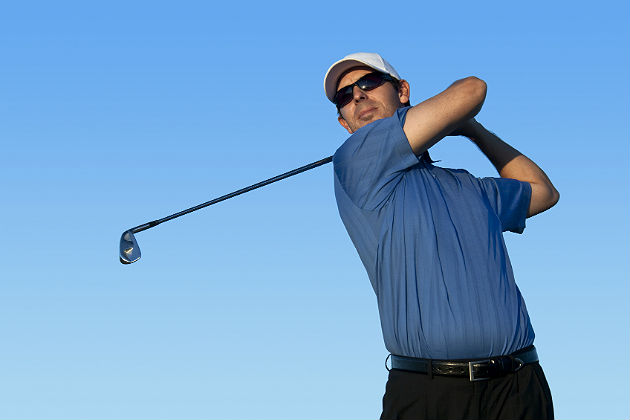 Shouting the warning term "Fore!" in advance of a golf stroke is standard practice and part of the game. The need for such a warning is clear, but how the term originated is not. Two common explanations have been put forth.

One is that it may be an abbreviation of "forecaddie." A forecaddie was the person responsible for scouting the hit ball so as not to lose it. The golfer would warn the forecaddie in advance of hitting the ball.

The second theory is that the term evolved during a period in the 1500s in Scotland, when a golf course and military practice range were the same shared field. Military using the shooting range used the phrase to warn of artillery fire — "Ware Before!" This term was already a shortened version of "beware before," and a theory is that the golfers adapted it to the warning in advance of a golf hit to "fore."

Regardless of the origin, the need to warn other golfers of a ball being hit is important. Although rare, golf injuries to the face have been identified as the most devastating of eye injuries in any sport.

Golf injuries represented only 4 percent of the reported sports-related eye injuries by the United States Eye Injury Registry, and those numbers included golf clubs in addition to golf balls. Injury in the form of penetration of the eye by a golf tee have also been reported.

The loss of an eye is significantly related to having an injury caused by a golf ball, and this was identified in a review of 1,875 records for an outcome of blindness or loss of the eye subsequent to an eye injury in golf.

Studies that have looked at all ages also found injury due to golf activities to be rare, but devastating when they did occur. One such study followed golf injury over a 17-year period in a single medical unit.

They identified 10 injuries — three to children and seven to adults. Three of the injuries were caused by golf clubs and three by a golf ball. Like other studies, they found the injuries were serious enough to require drastic measures such as removal of the eye at an extremely high rate. Seven eyes required enucleation or evisceration.

Golf is a sport that places the athlete at risk for blinding eye injury. Wearing glasses designed for use in sports can provide protection against severe injury. According to eyecare medical specialist Dr. Gary Heiting, "Any sport in which balls, rackets or flying objects are present pose a potential for eye injury." Heiting suggests that protective glasses designed for active sports incorporating polarized lenses can provide protection for golfers without impacting visual performance.

Using eyeglasses to minimize risk for blinding injury during golf was also the recommendation of Dr. Ursula Weitgasser of the Department of Ophthalmology of the Karl Franzens University of Graz in Australia. This group reviewed a seven-year period of injuries and, like other researchers, found that golf injury was rare. However when it did occur it was devastating.

Wearing eyeglasses designed for sport appears to be the best practice to assure against the potential of a blinding injury when an unanticipated ball comes at a golfer or an errant swing of a golf club connects with the face of a golfer.

In addition to shouting "Fore!" as proper precautionary golf etiquette, good eye protection habits are also an important precaution of the game.