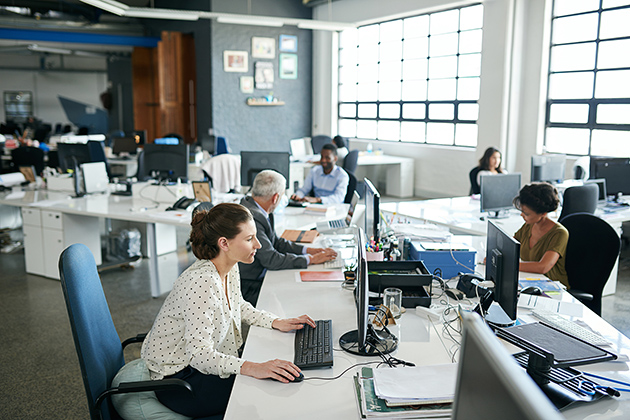 Companies with high concentrations of knowledge workers have been gravitating toward activity-based work (ABW) environments in recent years to address employees’ complaints about the shortcomings of open-plan office spaces. Although employee response has been generally favorable, recent research indicates that ABWs can present their own set of problems if not carefully designed.

In lieu of a single, dedicated office or cubicle, ABWs offer employees a wide variety of space types in which to work, each designed to support different types of work and interpersonal activities, such as high-concentration work, team projects, meetings, and social gatherings.

However, since companies moving employees from more traditional spaces to ABWs often want to encourage more employee interaction as well as lower costs by reducing their overall office space, they may opt for floor plans that provide more open spaces than private ones.

As a result, workers may have difficulty finding an available private space when they need one, thus exposing them to unwanted noise, distractions and a lack of privacy — problems ABWs are intended to solve.

Jan Gerard Hoendervanger, a researcher at the Hanze University of Applied Science in the Netherlands, has been studying employee response to ABWs for some years. Based on his findings, he observes that most ABWs currently work well for only a minority of workers.

The main reason, he says, is poor lack of fit. Research he and his colleagues conducted found that organizations often fail to account for differences in individuals’ work assignments, work styles and personalities.

For example, ABWs presume employees will move around during the workday and/or workweek as they undertake different tasks or inexact with different colleagues. Hoendervanger’s and other studies have found, however, that many employees prefer to remain at the same desk for long periods of time.

One reason, he notes, is that not everyone the office is engaged in knowledge work or knowledge work that benefits from high social interaction. Offering a greater variety of workspace options based on the actual employee population is key to a successful ABW work environment, he contends.

In a follow-up study reported in the October 2019 issue of the Journal of Environmental Psychology, Hoendervanger and his colleagues discovered that employees performing high-complexity tasks perceive the ABW environment as not well suited to their needs. There are not enough private spaces for everyone who needs one, and open spaces are not conducive to the work they need to do.

Hoendervanger recommends that floor plans provide greater separation between private workspaces and open spaces to minimize disruptions, and that more attention be paid to improving acoustics. Open spaces, he suggests, should be restricted to the outer boundaries, while high-concentration spaces take up the center.

Annu Haapakangas, a researcher at Turku University of Applied Sciences in Finland, also has conducted several studies on the impact of ABWs on employees. She and her colleagues recently completed a year-long study of four offices that moved to ABWs, along with one control office which did not, to measure employees’ short- and long-term response to the new environment.

They found that, contrary to some previous studies, the ABWs led to problems with communication and social relations as workers had difficulty locating co-workers, felt they had less privacy, and perceived a decline in sense of community because of lack of continuity with co-workers. Employees who moved from private offices in their previous workplace to the ABW workplace were more likely to be dissatisfied with the new environment.

In the discussion of the findings Haapakangas states, "the ABW is a general design concept while the dispersion in office designs as well as work practices is likely large between offices. The extent to which the disadvantages of the ABW design . . . are solved might also influence communication, social relations and work demands at an ABW." She reports that as a result of the research findings, two of the office spaces made some design improvements.

Hoendervanger’s research also supports Haapakangas’ conclusion that with some tweaks to the design ABW’s will function more as they are intended. "The concept has the potential to support the needs of contemporary knowledge workers and their organizations, if implemented with caution," he says. "Our studies also include best practices that support this positive view on ABW."